GoAUpher: I didn't bump this, but I assume whoever did felt the same as I do...any FanPost which coins the phrase "Ferentz of the Scrotum" gets a bump.

Ah, Hateweek. I'm sure, by now, you all are frothing at the mouth, standing with flaming pitch and pikes held ready at the Iwoa border, ready to impale @Vodka_Samm and her heathen ilk as they travel to The Bank. Aside from the filthy Wisconsinites, nothing makes our blood boil more than the mass of starving, unwashed corn people invading our fair city.

But for me, this year is different. While I will support the Gophers and pray to my spirit animals that Floyd stays in Minneapolis on Saturday night, I cannot muster my rage. Nay, I'm putting aside my disdain for the Iowegians and their love of cinder block homes and the Ozark harp this year, because something larger than that hate is at play.

When you see Herky on the sidelines on Saturday, you may not recognize him. He's become afflicted with a painful, embarrassing condition, for which the only treatment costs $18 million.

Herky the Hawk has Ferentz of the Scrotum. 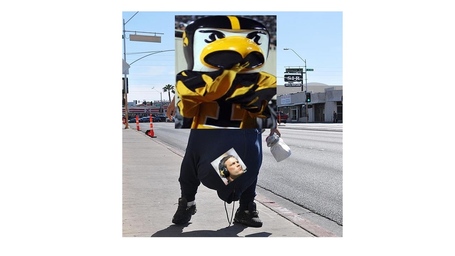 For those unfamiliar with Ferentz of the Scrotum, it is a rare disorder thought to be triggered by shortsighted, amateurish athletic directors. Its principal symptoms include lymph edema, gigantism of the sack and punting on 4th and 1 from the opponent's 34 yard line.

As Iwoa fans point out whenever they draw breath, Herky's scrotum was not always in such a state. "Laws no, it was the best scrote in the conference" said Chigger Dunlap of the Quad Cities. "That jewel bag sent more boys to the NFL than them Goofers. Now it's all swelled with Ferentz and, well, it's a damn tragedy. Throwing for two yards on 3rd and 5 ain't Iowa football!"

The only cure, though, is an $18 million procedure to drain the scrotum of Ferentz. "It is untested science, at this point," said Brandy Glung, Professor of Scrotal Sciences at the University of Iowa in Ames. "We calculate over 200 pounds of Ferentz in there. We can likely remove much of the swelling, but under-utilizing all-conference-caliber tight ends may necessitate radical resection and complete reconstruction of the organ."

So, Gopher faithful, when you see Herky on the sidelines, take a moment to reflect. If it were you, encumbered with a bloated, Ferentz-afflicted scrotum, would you want to see hate in the eyes of others? No, you would plead with all around you to take pity and spare a dime to rid you of your plight.

This Saturday, let's all help Herky take a small step to curing Ferentz of the Scrotum.