Hey, Football Outsider stats! As a reminder, here's a glossary.

One caveat here, I don't use Bill Connelly's EqPts metric in my calculations. Instead, I've derived an equivalent value of my own that represents the same thing: an expected or equivalent point value based upon the yard marker the play stopped at. The big difference between Bill and I's derivations? The tail for my EVPoints are much thinner and the slope inside the redzone is higher.

1) Boom or Bust vs. Consistency

Much was said of the contrasting styles between the Spartans and Gophers, the differences themselves manifesting in the advanced box score above. However, the real key to the game was the consistent, prodding nature of the Gopher ground attack versus the all-or-nothing approach from David Fales and the SJSU offense.

Sure -- when the Spartans did succeed, they did so quickly. Yet, they also failed in a hasty manner, notching an average plays per drive of just 3.8 compared to Minnesota's 6.4. That's basically a three and out compared to two sets of downs. When you add in that the Gophers were finishing half of their drives with touchdowns, the boom or bust nature of SJSU's drives wasn't sustainable over the course of an entire game. Minnesota did, in fact, wear the Spartans down.

Minnesota couldn't (or didn't) pass at all against SJSU, while the Spartans were pathetic on the ground. The latter was more an issue in determining an outcome, since San Jose State had every tactical and schematic advantage thinkable in the second half after Minnesota defensive coordinator Tracy Claeys made personnel adjustments to take away Fales' ability to complete deep throws. Ultimately, the Spartans couldn't run when they really needed to, while Minnesota didn't need to pass because SJSU couldn't stop the run.

Another aspect I found intriguing: for all of Fales' quick strike ability and ridiculous accuracy on his downfield tosses, SJSU's passing success rate was within a standard deviation of the national averages. In other words, the Spartan passing attack was successful at achieving necessary or more distance a little better than expected but not to such a degree where you could say Fales completed passes at will. In fact, this speaks to the boom or bust nature of the passing game I mentioned in point 1: when Fales was on, he was on. When he wasn't, he was downright awful... and he couldn't use a heavy pass rush as an excuse, since the Gophers didn't get to him at all.

3) One Bad Quarter vs. One Outstanding Quarter

Kill mentioned after the game that the defense suffered one "really bad quarter" that made the game appear more competitive than it would ultimately conclude. This is absolutely true: the second quarter EVPP+ stat for San Jose was absurd. Equally true, however, was San Jose State's abysmal third quarter in which they had a 2 play drive cut short by an interception and consecutive three-and-outs; The Spartans failed to cross their own 35 yard line during the entire quarter, while Minnesota would score 10 points and another TD one play into the 4th. The margin expanded to 19 points at that moment, effectively putting the game out of reach for SJSU.

Again, it was Claeys' adjustment to take away the passing game (more in Chalk) combined with SJSU's inability to run out of their base spread formations and force Minnesota out of such a funky personnel grouping that did them in.

Minnesota's initial approach to defending 4 receiver, single back spread sets was par for the course: rotate between combinations Quarters and nickel, man-to-man or zone. That's a perfectly reasonable way to defend the situation, especially for a defensive coordinator who has confidence both in his secondary to break up passes and his defensive line to generate pressure.

Against San Jose State, that script got completely tossed out the window. 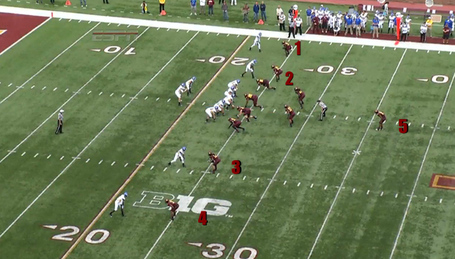 You can see the Gophers are showing nickel man press coverage against a 4 WR set with a deep safety patrolling the middle of the field (MOFC). Derrick Wells, originally slated as the Gophers' starting boundary corner before fall camp injuries shifted Eric Murray over to that spot, is lined up in the field slot against SJSU's most explosive receiver, Chandler Jones. As seen in the above photo, there are 5 defensive backs on the field. 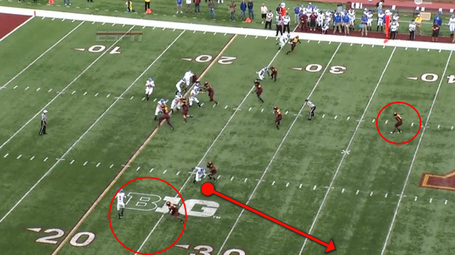 Multiple things happen post-snap that set up the quick 76-yard touchdown. First, deep safety Antonio Johnson is cheating towards the boundary versus the field, ready to support the pressing DBs in case either slot receiver runs a post or to provide over the top coverage on the boundary slot in case of a vertical route. Where he is in terrible position, however, is to defend a fade from the field slot receiver. That's exactly what route Jones is running.

Compounding matters here is the fake screen by the outside receiver to take the other playside DB - Martez Shabazz - away from the downfield route where he could potentially break off his coverage and support the deep pass. Wells simply does not get a good enough jam on the receiver at the line to disrupt the timing of the route, leaving himself open - by only a step, mind you - for attack.

A step is all an NFL caliber quarterback like David Fales needs. 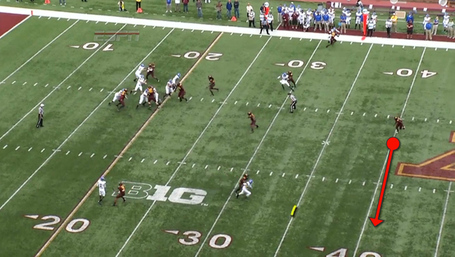 Johnson takes a bad angle here, perhaps assuming Wells will slow down the receiver after he makes the catch. Jones catches the perfectly placed ball in stride, and Wells falls over. This is how you end up giving up over 13 yards per dropback yet only 17 points.

Once the second half rolled around, Claeys made the most unusual of adjustments. Instead of just bumping up to dime coverage, he went a step further -- running a 3-1-7. 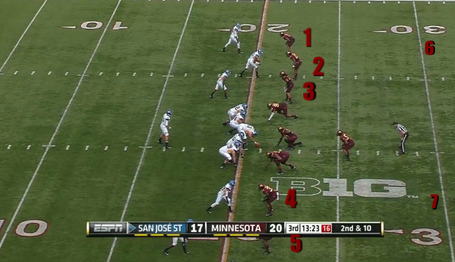 Yes, there are seven(!) defensive backs on the field for Minnesota. And one linebacker. And only 3 down linemen.

On this particular play, the Gophers are in man press with 5 DBs matched up against 5 SJSU receivers and 2 deep safeties in Cover 2 to take away the deeper routes. Aaron Hill is cheating a bit towards the boundary, something he was instructed to do by the staff since that was a "high percentage passing zone." Jeremy Baltazar would, of course, deflect a passing attempt right into the arms of Hill and set up Minnesota's first score of the second half. In fact, the Gophers would rattle off 23 unanswered points en route to a comfortable victory.

The 7 DB personnel group solved two particular issues the Gophers were having in the 1st half: 1) taking away the deeper throws by preventing them with safeties covering the deep halves and 2) limiting the quick, underneath throws by playing press man. In the second half, Claeys would trot out this same 3-1-7 alignment on 22 of SJSU's 26 snaps. In fact, there was only one play in which San Jose would line up 4/5 wide and Minnesota brought 4 down linemen.

A natural counter to such a funky defensive alignment would be running the ball with a draw, since there are only 4 defenders in the box compared to 5 offensive linemen. That SJSU still couldn't run on Minnesota under such circumstances was the schematic turning point of the game. Without anything to keep the Gopher defense honest, Minnesota was remove the threat of the deep pass while simultaneously making windows smaller on the shorter routes. Claeys won this particular chess match.

Lastly, a little something on the Gopher passing game. I know what you're thinking: what passing game? 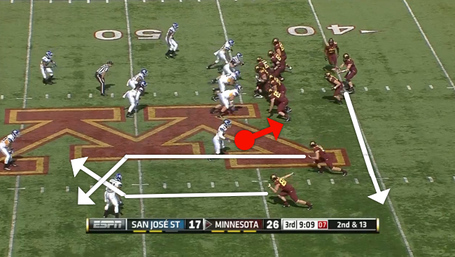 I wonder if the coaching staff looks at plays and route combos their opponents run during scout looks and think to themselves, "That play is pretty good -- I'm stealing that!" I say that knowing full well that it does happen, as the above route combo - the post-flag or "scissor" route - was a staple of Western Michigan's offense under Bill Cubit. Cubit is now the Illini' offensive coordinator and I can't say with certainty that WMU is where our staff picked up on this, but you get the idea.

Anyway, Limegrover's take on the scissor route was to fake a jet sweep (which had already been run twice in the game for first downs) on play action to suck in the outside 3-4 backer from his zone and confuse the safeties. Spartan CB Bene Benwikere is caught in no man's land here: he has to either release the outside receiver (Drew Wolitarsky) to the safety once he crosses his face or cover the flanker in man, leaving the flag open with an out of position safety. 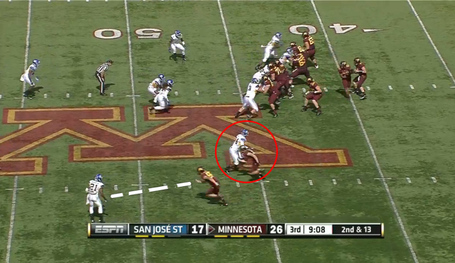 The outside backer is no help to the play right now as he lets Isaac Fruechte run by. 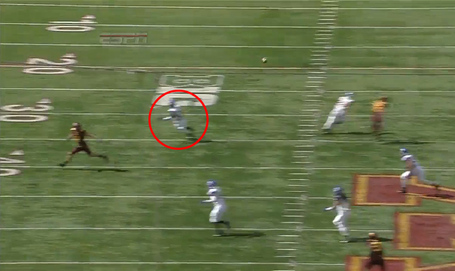 Different angle now but you can the safety taking responsibility for the post over the middle, while Benwikere recognizes the flag too late and is unable to break on a receiver with nothing but grass ahead of him. A well timed call from Limegrover.