This is about the moment the smell hits you. - GoAUpher

GoAUpher: First the quality moniker and now this delicious, delicious HATE? 007 Golden I is making a splash as a new member of this community. Bravo!

I’ll start off in confession:

Now that I have these things laid bare.. let’s begin.

I’ll admit, I feel conflicted about the term hate, and this week in general sometimes. On one hand it’s (largely) innocent fun, cathartic, and all around enjoyable for body and soul. On the other hand, I have a lot of friends back home, and a lot of them are peaceful, respectful Hawkeye fans, who do themselves and the U of I credit. I feel no shortage of conflict telling them in no uncertain terms that I *HATE* the Hawkeyes, it just makes for uncomfortable visits when I make my holiday trips back.

But I do. I hate the Squawkeyes. You know why? for every polite Hogeye fan, there are 10 of the next kind. You know who I’m talking about. The kind that claim that games against them are "Super Bowls" and proceed to get beaten up any time they play a truly good CFB team (or, in 2010 and 2011, really really awful Gopher squads). The kind that still claim that TCF is "Kinnick North", despite never having won in that building. The kind that graduated almost 30 years ago and are more inebriated and foul-mouthed than their kids sitting 4 sections over in better seats. The kind who think Madison is a scaled up version of Iowa City. The kind that say football history is worthless if you talk about football before Hayden Fry. The kind who moved out from Chicago because they enjoy "that small town feel." The kind who say "IT’S GAME DAY IN IOWA CITY, ________" for away games. The kind who think that the reason they travel well for bowl games has absolutely nothing to do with how awful Iowa is in the winter. The kind who, despite all these things, don’t understand why the rest of the B1G can’t stand them.

These are the people I hate. The people who drove me (fortunately) to only apply to universities in excess of 4 hours away from home, in every direction except west (seriously, going to UNL would have been gross). They somehow delusionally believe that 27 years in the ‘dome and Tim Brewster wouldn't have affected them, and they would have somehow remained the dominant team through that time period. curses all things Maturi, Brewster. News flash, no amount of Fry could have saved you from that death trap of a building.

(aside: watching the golf cart at 0:10 try to GTFO has never failed to make me giggle.)

They also defend the entire state of Iowa on the premise that Iowa City is awesome, and so it automatically covers for the whole state.

It doesn't. Iowa is emphatically the 3rd or 4th worst state in the Union, depending on how you grade the Dakotas. On my trip home to watch the affront to aesthetics and college football in general that was known as the 2009 battle for Floyd of Rosedale, no sooner had we crossed the state line before one of my friends honestly asked me "dude, what’s that smell? Did you just poop yourself?" I hadn't. To my knowledge, neither had the other member of our group. He didn't even know we had crossed the border. He just smelled Iowa's essence. You know how distinctive the welcome sign for Iowa is? It is, quite honestly, the saddest thing I've ever seen.

Entering Iowa: "Yeah, we, um, couldn't really afford to put anything up, so we repainted an exit sign, focusing our color palettes on "blah" and "field" Also, we couldn't afford road construction. Sorry." 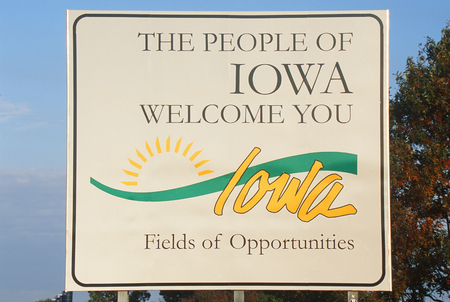 Contrast with entering Minnesota: "Here, we’ve erected a small statue commemorating this joyous occasion in your life! Also, we understand you’ve been driving through landscapes flatter than a pancake for a couple of hours, so here’s a giant hill to break things up! Want some hot dish?" 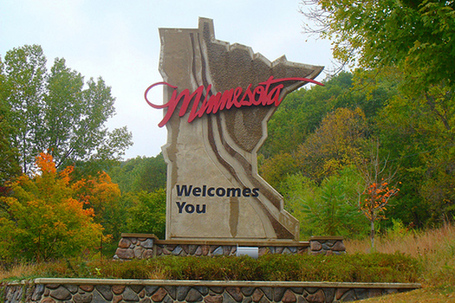 Iowa has a couple nice fields, a lot of crappy ones, a sad reservoir that floods catastrophically every 20 years and a couple of cute blondes who are in town visiting their grandparents’ farm for the weekend. It occasionally gets mistaken for Idaho and Ohio, because it's not particularly memorable in any way, shape, or form.

Minnesota has lakes, forests, wolves, bears, Bald Eagles, really really awesome beer, and numerous home-grown cute blondes. As soon as you're 45 minutes north of the Cities, your eyes are feasting on God's Country. Also, Iowa? We have Jerry Kill.

I think it goes without saying how awesome Jerry is. But I'll say it anyway. He's flipping incredible. Seizures? He doesn't give a flying damn, he's back working harder than you the next day. Jim "Ass-hat Supreme" Souhan? Screw him, Jerry's sheer aura alone galvanized one of the better non-conference crowds since opening season at TCF into existence, with a oh-so-satisfying "Fire Souhan" chant to top it off. He ran your sorry butts out of town in 2011 when he was still playing with [REDACTED COACH]'s players.

Jerry Kill looks like Goldy, and Goldy is a certifiable badass himself.

Jerry Kill stared Cancer in the face, beat it, and doesn't give a hot steaming damn if his grammar is suitable for a public speaking position, because the joke's on you, he's just going to go win more football games anyway.

Jerry Kill taught Ra'Shede Hagemen that he could become more and ascend into Optimus Prime.

Jerry Kill is the one who told us dead in the eyes that he would make our team better, our suffering worthwhile, and our joy forthcoming.

Jerry Kill is the reason there's a going to be a winning football team in the state of Minnesota this year.

COUNTRY JERRY IS COMIN' FOR Y'ALL, IOAWANIANS, AND HE SMELLS FEAR ON YOUR OTHERWISE PORCINE FECES-RANK BODIES.

So can it, Iowa State Unversity - Iowa City Campus fans, I don’t want to hear it. In 20 years when #HailTeague and Country Jerry have raised our program to juggernaut status and TCF is full of 80k+ rabid Gopher fans on Saturday mornings, afternoons, and evenings, you'll look at the accumulated filth of Barta and Ferentz's reign, the waning attendence figures at Kinnick, you'll look up at us and shout "Bbbbbbut wwwwwwe're still relevant, right?!..." 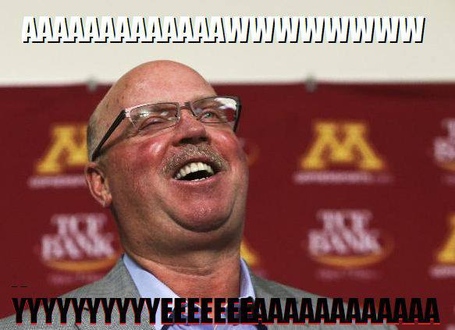