Minnesota's 28 point victory over the Rebels didn't necessarily manifest itself in the box score. Check out a deep dive into the numbers to find causes for celebration, plus areas of (relative) concern.

One of the many benefits of blogging with SB Nation is I get to participate in cool stuff like the Football Study Hall Charting Project, a crowd-sourced effort to break down each and every game this fall with additional detail that the boxscores and play-by-play summaries are missing. Since the season is only one game in and standardization against national averages requires at least two games against FBS opponents, today's Charts and Chalk will feature some of the more interesting insights derived from the charting project. Namely, play direction.

One of the takeaways from last Thursday night that produced the most consternation among Gopher fans was a worse-than-expected performance from the offensive line in the running game. Given that the offense tallied over 200 yards on the ground and 3 rushing touchdowns, concerns need to be taken in context; UNLV was not expected to pose much of a threat to stopping the run.

When you distill the argument down to the critical elements, the lack of push from the interior OL and paltry rushing success on runs between the tackles were the culprits. Highlighted in red from the above table, Minnesota rushes up the middle -- at all hash marks -- were incredibly unsuccessful. On 14 RUTM (run up the middle), the Gophers could only muster 17 total yards; this was not the type of performance Coach Jerry Kill expected out of his interior linemen. A few negative plays are directly attributable to right guard Caleb Bak, who allowed a Rebel defensive tackle backfield penetration more than once.

However, things weren't all bad for the ground game. Where the running game shined -- and could potentially open things up in the middle -- were runs into the short side of the field, aka the boundary. Highlighted in yellow, the above table shows the runs by Minnesota into the boundary by hash mark. Even without Philip Nelson's 48 yard zone read TD, the Gophers had success running behind right tackle Josh Campion; Campion appears to be coming into his own as redshirt sophomore and starting his 14th career game.

Sample sizes be damned, these are two items to keep watching for the next few games.

On the flip side, Minnesota's primary task on defense was to thwart the Rebels' passing game, despite not being entirely certain how UNLV would attack them due to a change in offensive philosophy. As I mentioned in the UNLV Preview Hangout, if their plan was to go all in on Nick Sherry throwing the ball, it likely wouldn't end for the Rebels. Sherry threw the ball 50 times, and really didn't have much success at it.

UNLV went with a 1 running back/1 tight end/3 wide receiver (11 personnel) or 1 RB/0 TE/4 WR alignment on 85% of their snaps, throwing the ball 66% of the time out of said formations. They went exclusively no-huddle shotgun, and while the offense wasn't in hurry up mode, forgoing the huddle and substitutions prevents the defense from matching with the proper coverage packages.

Still, when Sherry and the Rebels attempted anything to the outside with their quick hitting no-huddle attack, they didn't have much luck going against Gopher CBs Eric Murray and Briean Boddy-Calhoun. In what was an impressive starting debut for both players, the yellow highlights from the above table just how effective the Minnesota passing defense was outside the hashes.

Where the Rebels did have some modicum of passing success was up the seams and inside the hashes, a direct result of the Gopher DBs playing off to prevent the big play. The middle of the field was open to quick slants and posts, as Sherry spent most of his time in a 3-step drop and getting the ball out quickly. One caveat, however, is Sherry's 2nd quarter touchdown pass to Devante Davis was in-between the hashes and a direct result of a Martez Shabazz inexcusable miscue.

The amazing thing about the performance of the DBs was it came without Derrick Wells, whom Jerry Kill referred to as "our best defensive back." With Wells and the flexibility he provides in coverage (not to mention providing more depth for nickel packages), there's a possibility the passing numbers between the hashes could get even better.

Now, one might say the Rebel passing numbers are skewed towards the low end because their no-huddle attack was deliberately geared towards efficient, lower risk short passes. While this is true in principle, that ignores A) Minnesota's safeties and CBs spent much of the game playing well off receivers to element the threat of a big play and B) even when Sherry did throw the ball downfield, he didn't have much luck. Of the 10 passes Nick Sherry threw beyond 10 yards, he went 2/10 for 48 yards (4.8 yards per attempt), 1 TD and 1 interception. In reality, Shabazz's gaffe should have been a PBU and a turnover on downs, while a whopping 6/8 incompletions were a direct result of good defense. One other pass was dropped, and the other INC was thrown out of bounds.

On to the not so rosy: the Gopher defense gave up way too many long running plays (all of which were missed alignments/assignments or tackles). And all of those runs came right up the gut:

The Gopher coaching staff had spent the entire offseason preaching "alignment and assignment" on defense, and as luck would have it, they now have several teachable moments on film to underscore the importance of staying in your lane and maintaining your defensive assignment.
While it's true that these sort of errors are unacceptable and need to be corrected before the B1G slate begins (cliched #TAKES alert), that newcomers and backups were largely responsible for the miscues is less worrisome overall than if experienced starters were the ones botching their jobs. Another oddity: the defense only allowed 1.43 yards per rush up the middle from the left hash, which to suggests nothing specific about the left hash mark but that the defense certainly has the potential to play much better up the middle -- provided they do what they're supposed to.

As mentioned earlier, Cornett's TD run on the opening drive was the result of a missed alignment from the Gopher defense. Actually, it was part good play design and tendency breaking, though mostly poor defense from newcomers.

One of the ways you counter against a team with an aggressive defensive front that strives to get upfield is to use a draw. This allows the DTs to run themselves out of the play and leave a big hole for the running back. When you combine a draw with a pulling linemen and run said draw out of a heavy passing formation, you can hit paydirt by catching the defense off guard. That's exactly what happened on Cornett's touchdown. 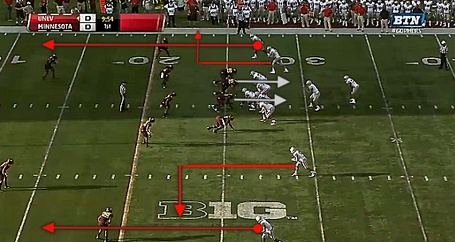 The Rebels lined up in their 1 RB/4 WR set, a formation they under-indexed running the ball (relative to their overall run-pass ratio) and over-indexed passing. Minnesota is defending against this formation with nickel quarters. On the snap, UNLV 1) allows the Gopher DTs (Scott Ekpe and Roland Johnson) to get upfield before the center and right guard block them out of the play 2) hold the ball long enough to fake the timing of a pass 3) vacate the middle of the field by running outside verticals and inside out routes. Since the Gophers are playing MOFO (middle of field open) with their coverage, UNLV happened to call the right play to exploit against the perfect defensive assignments. 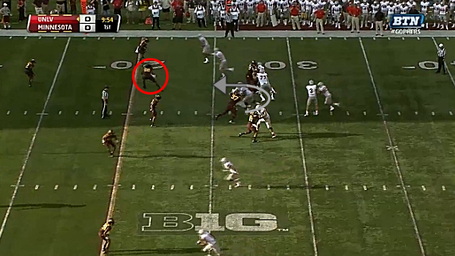 Right away, WLB De'Vondre Campbell turns his back to the play and goes into man coverage against the inside receiver, two big mistakes. In quarters, the outside CB has zone responsibilities in his "quarter" of the field with underneath routes or, if no one breaks underneath, to handle the downfield receiver by turning his hips and running. If the underneath route breaks, he releases his WR to the next level defender who assumes responsibility of the route. Linebackers in quarters are generally playing zone, though on this play there appeared to be confusion since both Campbell and nickel safety Brock Vereen are playing man against the inside receivers.

The other critical factor here is UNLV pulling the left guard to the second level. This gives a hat-on-hat matchup between the LG and SLB Aaron Hill, who doesn't follow the direction of the pulling guard after the snap and recognizes the draw too late. Neither Hill, Campbell or any DB are in position to handle the running back as he hits the second level. 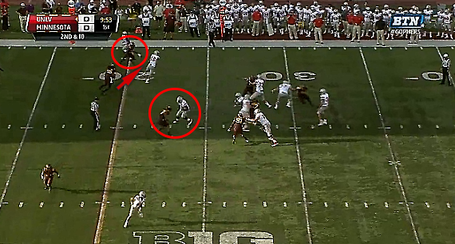 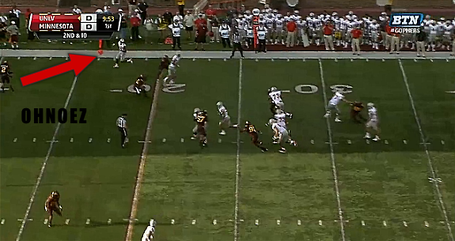 You can see the deep safety Cedric Thompson taking responsibility of the outside receiver after Murray releases him, leaving nothing but open space for the running back. By the time Campbell realizes what's going on, Cornett is already passed him.

To properly defend a run of this sort, the WLB and nickel safety would have to maintain zone coverage and the SLB should meet the pulling LG in the hole to force the runner to either side, where he would be met by either the WLB or the nickel safety, plus a combination of backside pursuit from the defensive line. The difference between a 7-8 yard gain with imperfect defense assignment and an easy touchdown belongs to Campbell, however. If he keeps his shoulders square with the LOS, he would be in a position to prevent a bigger play. 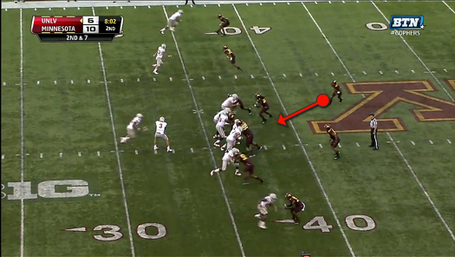 Later in the game, Minnesota defensive coordinator Tracy Claeys made an adjustment in nickel by crashing a safety down into the box and having the other safety play the MOFC (middle of field closed) role. Although this play occurred in 11 personnel with 3 WRs, the draw action and pulling guard are the same. Here, Ra'Shede Hageman gets such a good push that he disrupts the timing of the pulling guard, while both Vereen and Hill are in position to make the stop.

On to Philip Nelson's zone read!

Take special note of the wingback/fullback, #30 Mike Henry. He moves parallel to the LOS and crosses the "read" defenders face, which gives Nelson enough of a window to pass by. Normally, this defender would be in good position since he stayed home on the dive fake and let the interior defenders crash on the RB. However, since the fullback came across his lane and this DE has no idea if he's running a route or attempting to block him, the defender cannot react in time to catch Nelson on the keeper. An excellent play design that could have a number of variants down the road, not the least of which is running the exact same read but have the FB kick out the released DE.

Once Henry gets passed the LOS, he acts as a lead blocker for Nelson and takes out the one defender he has to: the playside safety. With Engel and Fruechte running downfield routes, no CB is in position once Nelson hits the second or third level. Right tackle Josh Campion makes the other critical block, sealing off the outside linebacker.

It should also be noted that this play was run into the boundary and off right tackle, one of the major insights from the chart breakdown above.