Week Two of Models and Bottles is all about the revenge game. An update to the simulation, new Gopher win projections, random Vegas spread related tidbits and an outlook of the game against the Aggies.

Last week's modeling would have been right on the money... if we didn't include non-offensive scores. I hope all of you that used the model as a gambling baseline (IMPORTANT: never do this) went with a hubris bet instead.

So yeah, about this editorial note from last week:

* Ed. note (from Matt, not GN): I found that I missed a few factors in this week's modeling that affect the results of the simulation. I'll have the fix in next week, just know that it actually does change the results... for the better (and no, this what not at all intentionally and/or data manipulative.)

My bad. I've made the necessary corrections and updated the simulation, the results of which are below. 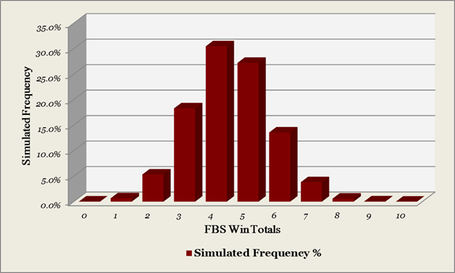 The updated models actually bumped up the season mean win total nearly an entire game, from 4.4 to 5.3. With an (almost) certain victory against FCS Western Illinois (though nothing is certain after seeing the FCS related macabre around college football week one), that puts the average Gopher season smack dab in the middle of -you guessed it- fringe bowl territory. Rejoice!

With 10 FBS games remaining on the docket, the simulation projects the Gophers reach bowl eligibility 75% of the time. For those of you hoping for somewhat of a breakout season, Minnesota would top the 8+ regular season win total approximately 1 out of every 5 seasons. At this point, there's still a small - but not negligible - chance the season could sour and fall to the FBO projection of 4 wins. Generally, things are looking OK after week one.

It's time for revenge!

The Rebels are one of the two almost sure FBS victories on the schedule. We're favored by double digits at home for the first time since the NMSU game in 2011, a game that I wish I never had to reference again but will undoubtedly have to over the next week or so.

The Aggies are the other almost certain FBS victory for the Gophers. Funny how that works when you schedule two of the historically worst FBS schools.

As I eluded, I'm going to have to refer back to the 2011 NMSU game, even though I'd rather not. If the current line holds, the Gopher road trip to Las Cruces will mark the biggest points spread since... the 2011 game against the Aggies. The last time Minnesota was favored on the road by double digits? The 2006 season opener against Kent State. How about the most recent instance of Minnesota being double digit favorites in back-to-back games? That'd be 2005: Against Tulsa, Colorado State and FAU.

The spread wackiness doesn't stop there. Minnesota is 12-3 straight up in the last 15 games as a double digit favorite. Those three losses? Two of them occurred during the home debut of a new head coach (Bowling Green in 2007 and.... NMST in 2011), while the other was the infamous Indiana "hurricane" game. The Gophers are 11-4 against the spread in said games.

Enough spread non-sense, back to math. The model actually did a fairly good job of projecting the scoring output of both offenses from Thursday night, all things considered. It's the introduction of those non-offensive touchdowns, which by their very nature happen so infrequently that their predictive nature is also rather difficult. In fact, the only variable in which I can capture the effects of such non-traditional scores is touchdowns per game for and allowed, which would smooth out the incidence of non-offensive TDs across the entire season.

Still, how would one go about predicting things like the probability of a blocked field goal? I'm guessing factors such as distance, past blocks kicks/punts for and against, plus other items that may contribute to block rate at the individual level (like defensive linemen PBUs) would be included, though I can't say for sure. Something to noodle on.

It occurred to me when researching for this post that we're all about to experience something exceptionally rare: the historically worst FBS program hosting an AQ opponent for a home game. The Aggies squared off against Cal in 2005 (losing 41-13) and Oregon State back in 2001 (a 27-22 loss). And that's it over the last 25 years.

So, that got me thinking. Just how frequently have the worst of the worst actually played home games against major conference opponents? Here's a sampling:

Of the five programs with a .334 or lower all time winning percentage over at least 200 all-time games (excluding Temple, which somehow convinced the Big East to let them in more than once), they've hosted AQ opponents for a true home game 18 times... and lost each and every one of 'em. New Mexico State earns the distinction of replacing UNLV as the historically worst team to host a Big Ten opponent... ever.

I'm still bitter about what happened the last time we played these guys. Like, really scorned. Back in my FBT days, I soothed the pain by wrapping myself in the harsh yet comforting arms of Cutty Sark, popped in some Waylon Jennings and produced some feeling art.

This time, there'll be none of that. Because the beer of the week is Hell Hath No Fury from Bell's, and much like the name implies, the Gophers will have no trouble with motivation for this game.

Revenge is best served cold. So is beer.