You know that dynasty word people like to throw around? This is what one of those looks like.

I feel like someone made a song about the University of Minnesota Dance Team. You may have heard it before...

Pom and Jazz Champions five years in a row. Simply astounding. The University of Minnesota Dance team is a machine, a dynasty that just keeps on rolling. That sort of happens when you're able to do stuff like this:

Talk about attack!! Fantastic technique and sync from Minnesota! pic.twitter.com/BiC1Q7mnIU

And the crowd goes wild! Minnesota showcases incredible technique and sync in 1A Jazz! pic.twitter.com/bRLlU3C2zz

I think this YouTube is the routine they won the Jazz title with, but don't quote me on that.

Reactions From The Twittersphere

Congrats to the University of Minnesota Dance Team, which won double National Championships for the fifth year in a row.

Can we talk about how amazing the Minnesota Dance Team is?! National champions for the fifth year in a row 👌👍 #dynasty #umnproud

On cloud 9 for the university of Minnesota dance team. 5 peat champs in BOTH Pom & jazz! Unheard of. Honored to be from the same state! ❤️💛

Minnesota's dance team can go to the Olympics now.

So proud of my girls representing minnesota dance team at nationals pic.twitter.com/BANTTFUIff

wow the university of minnesota's dance team just placed 1st at nationals in the D1 category for the 5th year in a row. must be nice

I really don't know what this one means but it sounds insane.

Heath and I just named a jump after the Minnesota Dance team.

What About Goldy And The Cheer Squads?

- Goldy: Goldy was robbed of another mascot national title by Aubie The Tiger. Personally I think that's just ESPN SEC bias coming though, but a strong 2nd place finish is still pretty good and all.

Also important? The continued dominance of Goldy over Bucky. 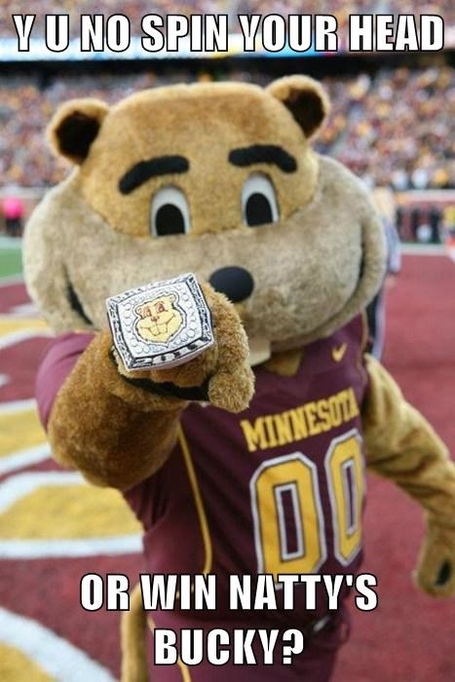 - Cheer Squads: Both cheer squads finished the year in the Top 10, with a pair of 7th place finishes.

7th in the nation!! Thanks to everyone who supported us! We couldn't have done it without @gopherAGcheer @UofMDanceTeam @GoldytheGopher

Hats off to the UMDT, Goldy, and the Cheer Squads