It's not newsworthy that Elliott Eliason is having a great season. Recently named a captain, Eliason has been key to the Gophers' early success. What may have been missed is how good his season is compared to the rest of the Big 10. Through the first third of the Big 10 season only Wisconsin have played a more difficult schedule than the Gophers. During that time, Eliason has solidified his place as a key contributor on offense and a rock on defense. Ken Pomeroy's similarity algorithm place his season alongside two recent first round draft picks, Cole Aldrich in 2010 and Gorgui Dieng in 2013.

This post breaks down Eliason's progress on offense and defense and shows how he compares to other top centers in the league. It includes lots of graphs because pictures are always better.

Eliason justifiably spent most of last season coming off the bench, but has come into his own as a starter on offense this year. As a starter, he's averaging 25.9 minutes a game, up from 13.7 last year and increased his offensive rating, points produced, rebounds, assists, free throw percentage and attempts. Despite the increase in minutes, he decreased his turnover rate and foul rate, which has been key to keeping him on the floor. Below are some graphs of Eliason's increased production relative to other post players. 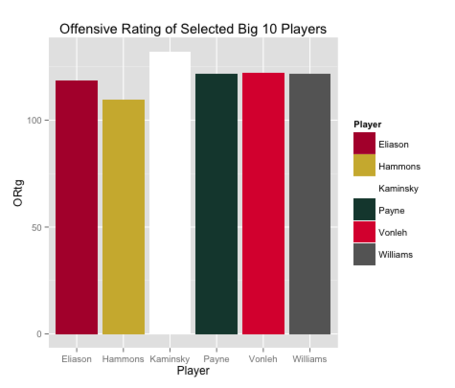 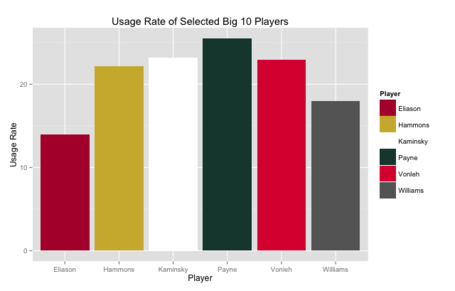 Higher usage rates correlate with a decrease in offensive efficiency, but Eliason's usage rate is very low and most of his points come from the low post. When Eliason has gotten the ball on the low block, he is converting nearly 80% of his opportunities. Most of his misses come off jump shots from beyond seven feet. Unlike Payne, Eliason doesn't have a extensive post game, but he is strong enough to get solid position and bully his way for lay ups. 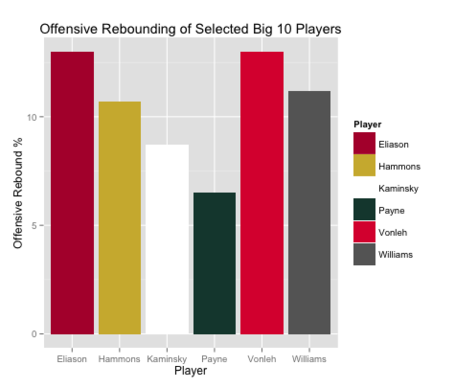 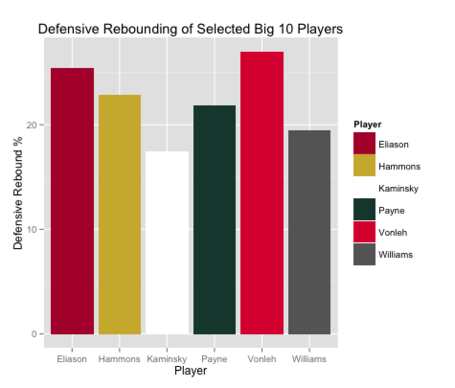 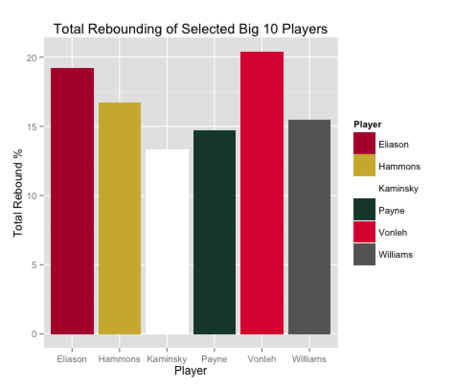 Eliason also does a good job with the parts of the offense that are neglected or missed by statistics. He sets good screens, keeping a wide base and sealing his man. Richard Pitino's offense depends on screens to put pressure on the defense to defend the lane, opening up looks from three.

Below are Defensive ratings for each of the previously mentioned centers. The formula for calculating them tries to estimate stops caused by an individual. Like golf, the lower the number the better. Eliason has a defensive rating comparable to other top Big 10 centers. While it has some value, the formula's major weakness is inherent to most defensive statistics. Defensive ratings cannot fully capture the dynamic character of defense. 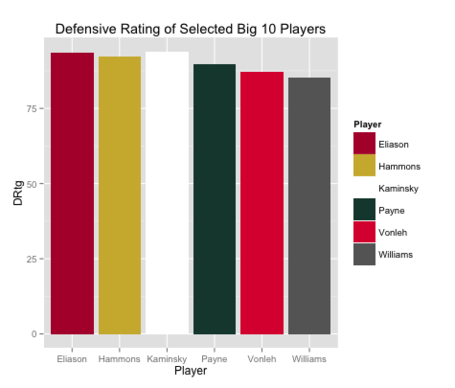 Most of the recent advances in basketball statistics are on the offensive side of the ball. While work has gone in to assigning defensive ratings, it is much harder to measure defense because of the spatial dynamics inherent in a defensive system. Take the 2-3 match-up zone, which the Gophers normally fall into after a press break. If a big man flashes to the middle, receives the ball and then passes to his teammate in the corner who makes a 3 point shot, which player on defense should be held responsible for the made shot? A cursory assignment would blame the man on the back line for failing to close out to prevent the shot, but this neglects the obvious: he was forced to rotate when the ball went into the middle of the zone. Defense is full of situations where the actual breakdown occurs before, sometimes well before, the actual shot went in.

Nonetheless, it is clear that Eliason is an elite defender. He's second in the conference in blocks and defensive rebounding, and forces lots of misses and kick outs due to his size and positioning.

One immediate objection to elite defender status is that the Gophers play the majority of their possessions in zone. How can Eliason be such a good defender if he's defending space instead of a man? Good rhetorical question! A study of Syracuse's 2-3 zone (with which Pitino's 2-3 shares many principles) found that centers end twice as many possessions as guards and wings, making them critically important. Eliason serves as the main defender in the zone. Indeed, the argument can be reversed. Unlike teams that play man, Eliason affects more possessions than the average big man. Teams that play more in man to man will "leak" credit to other players, especially post players.

Eliason in the center of the zone not only ends more possessions than guards and wings, his presence reduces the efficiency of opponent's offenses. To a degree this is speculative because college basketball does not have publicly available data on player movement. Still we have anecdotal data that this may be true, not only from good performances (Michigan State, Ohio State), but from times where he was absent. The Iowa game was a textbook example of the difference that having Eliason off the court for an extended period of time. Iowa scores most of their points from inside, and were able to drive at will on the Gophers without Eliason providing a deterrent. Eliason also fouls dramatically less often than Mo Walker, blocks twice as many shots, and plays against better competition. More data is needed, and is a project for a later post.

If they gave out mid-season awards, one would be hard pressed to name a more improved post player in the Big 10. For the Gophers to have a chance to make the NCAA Tournament this year, Eliason will have to continue to maintain, and perhaps increase, his level of performance.