The inaugural North Star College Cup comes to St. Paul this weekend. Here's what you need to know about the four Minnesota teams involved.

Due to constraints on my time this week, I won't be able to provide you with as detailed of a weekend preview as I would like. I've had this weekend circled on my calendar for some time, because bragging rights are definitely on the line against our in-state rivals, and I want those rights. Badly.

Here's the easiest and most efficient way I can break down these teams, via tables and graphs. MATH!

As you can see, I'm a big believer in KRACH. The KRACH method is an advanced modeling system, and it represents the truest way to evaluate teams that play schedules of varying caliber. If you follow the link to the USCHO KRACH page in the table heading, they provide a nice explanation of how it all works below their master table. Here's what it all means:

Those stats and how the rankings work can be a little hard to read, but fear not, intrepid readers, I have taken my day job skills and translated them into something useful for my hobby. You are my hobby. 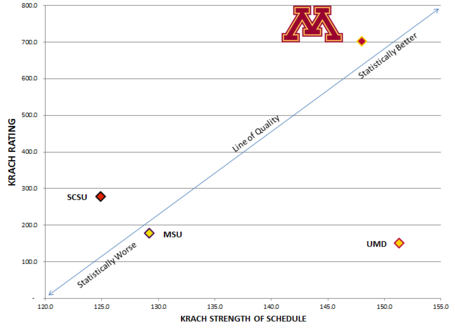 This team has a good .700 win percentage; they're 12-4-4 on the season. The reason that their KRACH rating is so much lower than Minnesota's is that it's dragged down a bit by their SOS. Four games so far against Colorado College and Alabama-Huntsville have not helped in that regard, but SCSU has only played one top-ten KRACH team to balance out their SOS. That team was Union, to whom the Huskies lost and tied in a weekend series in December.

I learned the hard way not bring the Huskies' weak schedule up to SCSU fans. I took a severe twitter beating from a few of them, full of the typical "you can only play the teams on your schedule" and "you're a Gopher elitist" clichés. They didn't seem to grasp the concept that the team administrators choose what teams appear on their own non-conference schedule, which is what has dragged their SOS down. But I digress...

SCSU is the second best team in the tourney, but they're not head and shoulders above MSU and UMD.

The Mavericks have played a few bottom-tier teams this season, but they've also faced off against some top-notch competition. They've played six games against teams currently in the top-ten in KRACH, Minnesota, Ferris State (the most overrated team in the country), and Providence. In those games the Mavericks are 2-4-0, having just swept Ferris State last weekend.

At home, the Mavericks are dominating opponents. They're 9-1-0 in the newly remodeled Verizon Wireless Center. They're not great on the road, however, posting a 5-9-0 record. It will be interesting to see how they handle playing at the X where they're likely to have a fairly sized fan contingent.

For the sake of entertainment, here's a great video of an old-time Maverick hockey fight. This video took me right back to the good-old days when Cellular One owned the naming rights to the building an you could expect this type of action from the Mavericks every weekend.

Also, it probably doesn't hurt to point out that my old man did the play by play for this broadcast. His traditional Maverick hockey role is color commentator. I would promise this is the last time I bring that up, but it's likely not.

Of the four teams in the Tourney, Duluth has played the toughest schedule, though they only have a slight edge over the Gophers in that category. Unfortunately for Bulldogs fans, their team has not stood up to the challenge nearly as well as ours has. They are a .500 team, on the nose. They have some good wins to their credit, one shellacking of our Gophers in a goofy Sunday afternoon contest, a win at an under-performing North Dakota early in the year, and one of their other seven wins that I couldn't be bothered to look up.

Much of the Bulldog's struggles can be attributed to inconsistency on offense, which isn't surprising considering that only three of their top ten scorers are upperclassmen. They seem to either score six goals or on goal, depending on the night. They only have seven players with 10 or more points, and only one of those has reached the 15 point mark.

I know the atmosphere for these games will be fantastic. I know anything can happen in a single game. I also know that I like to play the odds. I predict the Gophers will bring home the hardware this weekend.

The game against the Huskies will be a good one. I'm sure the Huskies and their fans have been waiting for this game all season. That anticipation was only heightened by the team's fast start, and the first-place votes they garnered in the polls. Still, I think the Gophers are looking forward to this match-up with the same level of excitement, so I expect a fast-paced game. Gophers win 4-3.

MSU and UMD play the early game on Friday. I think these teams are pretty evenly matched. UMD has played a lot of hockey against quality opponents, and I personally would like another shot at them to avenge the Sunday loss, but I see MSU winning this game. They just swept a Ferris State team that everyone thinks is pretty good (I disagree with that, but whatever), so they'll bring a lot of confidence into the weekend. Mavericks win 3-1.

That means UMD plays SCSU in the North Sacko College Cup, and I think SCSU will get some frustration out on the Bulldogs, so UMD earns the trophy nobody wants. SCSU 5-2.

The Mavericks will the get the chance to rectify getting blown out of Mariucci early in the season. However, El Padrino will throw the tournament a curve-ball and give Mike Shibrowski his s long-awaited second start of the year. MSU will not be able to mentally handle such a clever ploy as the scars from the November shutout are too deep, and the Gophers win this game easily, 4-1.