I'm in a very good mood. Which for some reason means I am going to mix Simpsons references with Victory GIFs. I think you'll enjoy it, but if you don't I DON'T CARE BECAUSE THE GOPHERS MADE BO RYAN AS SAD AS MR. BURNS WAS WITHOUT HIS PRECIOUS BEAR BOBO.

All morning I've felt like dancing. And this is the song I've heard in my head...

Beating the Badgers really helps you start a day out right! I know UStreet or GN will have further thoughts involving rational thought and stats and such. What I've got for you is nothing but pure joyful id, Simpsons, and GIFs. Let's get on with it shall we?

Who remembers the "Flaming Moe's" episode of the Simpson? It's the one where Homer invents a drink with a secret ingredient of children's cough syrup and Moe the bartender steals it from him. Homer becomes so distraught that he goes crazy and see's Moe's face on the body of everyone he meets on the street.

Well, something tells me that's how Bo Ryan feels today. His tiny Grinch heart grew three sizes when Andre Hollins went down. But then he had his dreams dashed by Maurice Walker.

I'll keep an eye out for everyone today, because somewhere in Madison Bo Ryan is walking around in his underwear muttering "Mo, Mo, Mo, Mo."

Can I be honest with you for a second? I've momentarily run out of Simpsons references. So I'm just going to run with the Victory GIFs for a bit until they come back. You know you're ok with it.

Let's all smile at the wonderful display put on by Malik Smith!

What do you think of that dagger Dre?

Oto got us our best Bo face of the night. Oto is now exempt from criticism for one half of play. 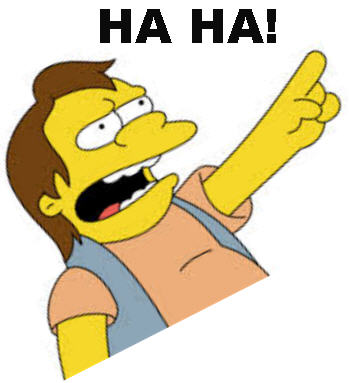 Ok, maybe I've got a couple references left in me.

The Moment You Knew Everything Was Coming Up Milhouse

Don't worry Bo, you'll come to grips with it all eventually. Or you'll keep whining all day long. Only time will tell.

Old Man Bo Gets Hit In Groin By Football

We can give the students a little more...

And this is the moment in the game when Bo felt like he got hit in the groin with a football.

And on that note, I'd like to end with a song. Just pretend it's about Bo.