The Gophers take a share of first place of the B1G West and gnomes celebrate with snark.

Look Illinois. The gnomes like you. They do. But this has got to stop. No more half measures. You need to win a few of these games and keep Tim Beckman around. This "stick with Wisconsin for a half and then get run out of Camp Randall" nonsense isn't going to cut it. In order to guarantee the gnomes high levels of snarky satisfaction only victories will do. So pick it up (but not against Minnesota...you're forbidden).

The Champaign Room is ready for...

For about 20-25 minutes, Illinois actually managed to make a decent game of it. If you like moral victories, I guess you can claim that as one. But once the second half started, the Illini reverted back to the pumpkins they've been all season.

You let Iowa play like you on offense. You lost your quarterback for the season. You wasted another rockstar effort by Tevin Coleman.

The gnomes turn it over to Crimson Quarry:

Suffice to say, this seems like we have entered Indiana's darkest timeline, as the Remedial Chaos Theory episode from the TV show Community would tell us. A bowl game seems unlikely if Sudfeld can't return, and even Purdue - who showed signs of life in their neon helmets against Sparty yesterday - will be a tough out. Plus, Mizzou getting blanked at home against a UGA team without Todd Gurley - whose suspension is absolutely ridiculous, by the way - makes our victory over the Tigers seem a lot less impressive. I hardly know what the answers are for this team, but here's a photoshop of Wilson if he were head coach at Greendale Community College to help try and cheer us up.

Emphasis mine. North Texas is the win you see change by? I think that says it all about Indiana Football.

Yea, the gnomes and I agree with our young wizard friend. WHAT THE HELL WAS THAT IOWA? All of the scoring? Quick scoring? It's all very confusing. Black Heart Gold Pants...can you help us out?

So... that was something, wasn't it?  Iowa set a season-high in points (45) and racked up 426 yards of offense (second-most all season), but the story of the game was probably that fever dream of a first quarter, when Iowa scored 28 points and featured the sort of explosive, big-play potential we've been dying to see from Iowa all year.

1) The Jake-to-Jake connection: Jake Rudock to Jake Duzey for a 12-yard touchdown pass.

2) Desmond King intercepted the ball and ran it back for a 35-yard pick-six.

3) Jake Rudock to Damond Powell for a 72-yard touchdown pass.

4) Jonathan Parker on a 60-yard touchdown run off a jet sweep. 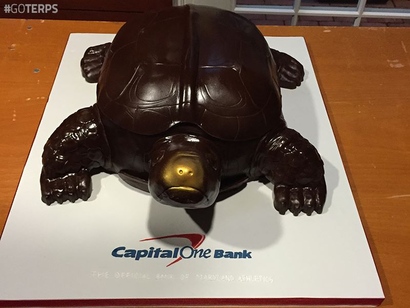 So this is pretty awesome. And is probably delicious. I bet it would go well with some B1G Ice Cream. Photo Credit: University of Maryland Athletics (via Facebook)

The gnomes see what you did at against Penn State last weekend Michigan. They weren't impressed.

Tell us what you think Maize n Brew:

Michigan participated in its third game under the lights in program history and it certainly did not disappoint. With a crowd well over 110,000 in attendance, Hoke credited the atmosphere to help the team win.

"The environment, the crowd there's no place better in the country," Hoke said. "I can tell you that our kids feel it, they feel it when those people are there cheering for them. The students that were there and the former players that came back and supporting those kids, you don't get that at any institution like you do at Michigan."

It is no secret that the team has faced heavy scrutiny over the last two weeks. With the losses and injury miscommunications, the team needed the victory tonight.

However, to sophomore cornerback Jourdan Lewis (who also had a crucial interception in the game,) he took it one step further.

He attributed this win to the fans.

"(The fans) were in the game, they deserve that win," Lewis said. "I'm glad they were behind us."

Just keep clapping Brady. I'm sure it will all be ok.

You let Purdue score points, lots of them, and gave them legitimate hope in the 4th quarter.

The gnomes...they don't want to talk to you. You're embarrasing them with your supposedly galaxy class defense giving up all those points to Purdue. You'll have to explain this The Only Colors:

Use whatever cliche you want, but No. 8 Michigan State did what it needed to do to pick up its first road victory of the season while improving to 2-0 in the Big Ten, courtesy of a 45-31 victory over Purdue.

Wake us when you play a game again. What are you looking for this week Corn Nation?

Then Northwestern stunned the Big Ten by upsetting Penn State and Wisconsin in back to back weeks. But then last weekend, Minnesota beat the Wildcats. So how good is Northwestern?  It looks like they are one of those teams in the muddy middle of the Big Ten.  On a good week, they can beat most teams (and maybe scare the teams at the top).  On a bad week, well, they can lose to just about anybody.  Maybe even Illinois.

What now Inside NU?

Is this the most underrated series in college football?

But one team that people never expected Nebraska to embrace as a rival was Northwestern. After all, the Huskers are big on their history, and NU football didn't really exist before 1995. Moreover, Northwestern never really wanted to consider Nebraska a rival the way Iowa and Wisconsin did. The only Northwestern-Nebraska rivalry that's been ignited so far is the one over the use of "NU."

The thing is, in the three years that Nebraska has been in the Big Ten, its games against Wisconsin and Iowa have been relative snoozers. The Huskers handily defeated Iowa in 2011, won a truly awful game in 2012 and got blown out in 2013. Wisconsin blew out Nebraska in 2011, and while Nebraska did win a close one in 2012, that was overshadowed by the Huskers' 70-31 loss to the Badgers in the Big Ten Championship Game.

Enter Northwestern. Despite this admittedly not being much of a rivalry on either side — somehow, both fan bases seem to like each other — this has inarguably been the most exciting Big Ten football series of the past three years. In fact, you could make the case that it's been the best one in the nation over that time period.

That part I bolded at the end?

What do you think of the Scarlet Guidos there Land Grant Holy Land...what's that? They are part of the ERMAHGODYOUGUIZTHEEBOLAZZZZZZZZARECOMING crew?

The state of Ohio (more specifically the Akron and Kent State regions) have been in the headlines lately with news surrounding a nurse traveling to the areas and later testing positive for Ebola. According to NJ.com, Rutgers head coach Kyle Flood is taking no chances this weekend:

"What I did is, I went online and did some of my own research just to see how it spreads and to educate the team, so we did a little bit of that this morning,'' Flood said following practice Thursday. "I assured them that the plane, when we get on it, will be sanitized and cleaned. From all the information I have, it's transferable through bodily fluids. It's not something you can get just by standing next to somebody.

"You gotta be careful. You gotta make sure your hands are clean, can't share drinks. We'll take all the necessary precautions. But it's not something that will distract us, either.''

Kyle Flood, are you players in the habit of drinking the piss, shit, blood, or other bodily fluids of people infected by Ebola? Do you fling poo at them when they mess up in practice? No? Then WTF are you doing talking about this? There are no necessary precautions. The necessary precaution here is to not be a virulent moron who talks like his players need to be prepared for Ebola. THIS IS WHAT YOU'VE GIVEN US JIM DELANY...EBOLA MORONS FROM NEW JERSEY.

You suck. Fine, the gnomes will let you talk Black Shoe Diaries:

A coach under fire. A program in crisis. And a bad, bad football team—perhaps one of the worst Michigan teams we’ve ever seen—playing a night game, at home, at a time when the vast majority of the fan base wanted not just the head coach fired, but the athletic director fired, too.

It was all set up so perfectly. And then it all went to hell.

This was a game that Penn State could not lose. But they lost it anyway.

On the plus side, NU fans can't gloat about beating you anymore.

The gnomes tip their cap to you Purdue on a hard fought non-victory.

Is it moral victory time Hammer and Rails?

Perhaps coach Hazell was right. He said we were going to love this team, and today was the first day I can say I really love this team. There have been some rough spots. The Central Michigan game was the bottom of the abyss after last season and the offensive struggles against Iowa were not fun, but today this team fought like mad bastards. That is a phrase I generally use to describe the basketball team, but it definitely applies to football today.

This is a uniform change we can all get behind.

This is shaping up to be Rutgers' toughest game all season, and it's what the program signed on for when the B1G came calling: national broadcasts on ABC for all to witness what the Scarlet Knights could do in a premier conference. With a nearly 20-point spread, the door is open for RU to make a splash yet again.

That's very true. You are just Rutgers to everyone. But the logic makes sense in the end I guess.

You let Tim Beckman play with you for a while.

Judgmental gnomes aside, there was plenty of running for BBucky's 5th Quarter to enjoy:

Gordon had a strong showing in the first half, rushing for 146 yards on 18 carries, adding all three of the Badgers' touchdowns in the half. Andy Ludwig chose to give the weak Illini rush defense a heavy dosage of Gordon and Clement, running the ball 26 times in the half while only having Stave and McEvoy throw the ball 12 times. Of the Badgers' 294 total yards in the first half, 223 came from running the ball while the passing attack combined for only 71 yards in the half.