Breaking down the stats and the film of Minnesota's big win to reclaim the Little Brown Jug!

Honestly, this entire post could be summarized more succinctly with this:

This game was way, way too much fun to not go back and break it down even further.

We did it, you guys! We really did it!

The following weekend, Tracy Claeys made the skies cry tears of blood -- much like the final scene of the Evil Dead remake. Or, if you prefer, this.

Bill Connelly was nice enough to produce an advanced box score of the game over at Football Study Hall, and I encourage y'all to check it out. My favorite part:

Because Michigan didn't have a successful play in the third quarter.

I have nothing else to add. I think that (and what everybody else has writing about this game) says pretty much everything.

Yes, that does speak - no, shout - volumes. I went a little deeper into the numbers and all I found for Michigan's offense was pain. The infographic is a sampling of my favorite advanced metrics, taken mostly from non-garbage times (where available).

3 and outs forced on 8 drives.

Havoc rate, or the percentage of plays disrupted by TFLs, PBUs or INTs, at 27% of all Michigan snaps. The national average is 15.9%.

Available yards, or percentage of yards gained given field position, at 22%.

The Wolverines were miserably ineffective all game, as Claeys and the Gopher defense made life a living hell for Shane Morris. Beyond everything else that occurred in the fallout, the wanton destruction of Michigan's offense by not starting Devin Gardner is as damning an indictment of Brady Hoke's coaching ability you'll find.

ROTATING KNIVES AND OTHER INSTRUMENTS OF DEATH

Maize and Brew has done a damn fine job breaking down Michigan's problems against Gopher misdirections and screens, though I'd like to begin the chalk section by heaping praise on Tracy Claeys, yet again.

Part of the reason the defense has made an even more dramatic rise in S&P+ and FEI rankings compared to a year ago is the various coverage looks and packages Claeys throws at opponents, which are incredibly confusing from a QB's vantage point. A talented and deep veteran corps of defensive backs is able to disguise their base quarters and nickel quarters looks with even more exotic schemes, such as pattern matching. This is all part of Claeys' plan to inflict pain on opposing offenses: force teams into passing situations, then hit 'em with pressure from all angles against coverages designed to take every route pattern into account.

Take Morris' fumble caused by air. It's 3rd and 15, and the Gophers come out in a 3-3-5 with DeNiro Laster as a stand-up rush LB. The three man front features Cameron Botticelli as a rush DE against true freshman Mason Cole, a line package that was installed during practice earlier in the week. Theiren Cockran and Michael Amaefula initially engage in a twist up front, though Amaefula will eventually drop back into shallow zone coverage over the middle (Claeys loves dropping linemen with zone pressures).

The coverage is where things get interesting. The linebackers and Eric Murray (at LB depth) are playing zone underneath, which will quickly tackle in crossing routes, passes to the flat or boundary out patterns under 10 yards. The two deep safeties go robber, accounting for any fly routes, deep posts or post-flags into the boundary. On the field side, the DBs are in man coverage.

Michigan's routes call for flys and slugos with a quick hitch to the outside and a TE cross. 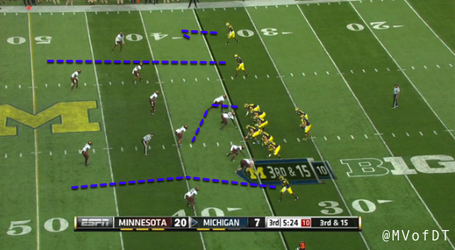 As you can no doubt see, the fly and slugo are accounted for by the man-to-man defender and the free safety, respectively, with the slot receiver double covered by the man defenders if they are, in fact, playing quarters. The TE cross is not only in front of the zone, but directly in the path of the dropping Amaefula. The hitch will do nothing, nor will a dump off to the back (who is in pass pro anyway). If Morris feels the pressure and tries to dump it off to the cross, it'll most certainly be a PBU or could be picked.

This is what Claeys does: forcing QBs into poor decisions based off pressure that could produce a turnover. As it turned out, a bull rush from the possessed Botticelli caused Morris to panic and scramble, with indeed created a fumble recovery.

Limey did a thing where he broke a tendency and made an overly aggressive defense pay. I know, weird.

On Minnesota's first touchdown, one predicated on effectively mixing RB and flanker screens, Limegrover finds himself in a fairly standard position: 3rd and 1, with David Cobb going full danger man against the Wolverine front 7. The Gophers line up in 22 personnel, and everyone in Michigan Stadium expects Cobb to get the hand-off. 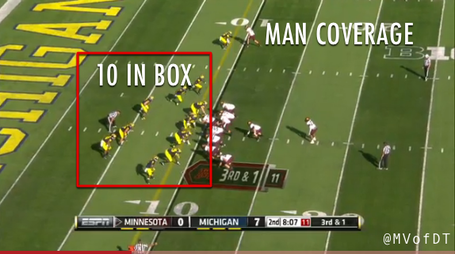 Trouble is, this was as perfectly timed a call from an OC you'll find. The outside rusher doesn't contain, which could be a result of instruction in practice that Mitch Leidner would have limited mobility and, of course, that Minnesota rarely does play action bootlegs. Isaac Fruechte clears the area by running into the end zone, taking his defender with him. The defenders responsible for the backside tight ends hesitate a bit on the PA fake, allowing Drew Goodger and Maxx Williams to get open on the post and drag.

This was a game that happened last year. Limegrover did the opposite of everything from that game against Michigan.

Credit where credit is due, this was a masterful call by Matt Limegrover. Not only was everyone on the Michigan side fooled, but he had Goodger open in the end-zone if Mitch decided not to keep it himself. The entire drive was tendency breaking and constraint plays at the most critical of times (since Michigan had just taken a 7-0 lead), allowing the Gophers to answer and keep the game close. If nothing else, showing the ability to screen and run bootlegs will serve as counters to defensive edge pressures, which could in turn free up more effective zone reads.