GoAUpher: This is fantastic and I'm proud to bump it to the front page. On a personal note, making my own LBJ has been a goal of mine for several years now (I want to use mine as a growler for tailgates) and I'll definitely be reaching out to Zales for tips if I ever get going on that project.

To help pass the time during this bye week, I thought I would share with everyone a project that I started working on about 2 weeks ago and just finished this week. This is a short story of how I purchased an old moonshine jug via e-bay, and created my own (not so perfect) replica Little Brown Jug. I apologize in advance for the word vomit to follow.

Sometime in 2011-2012 I started reading the excellent history of the Little Brown Jug that the guys at MVictors.com had started posting (Click here, seriously). They have what I would consider the most complete story of this trophy, even better than our own athletic department does at the moment. Several of their readers have created their own replica jugs over the years, and I thought "Hey, I can do that too!"

I decided this was the year to tackle this type of project. I haven't undertaken something like this since 2010, when I needed a "sanity" project after getting divorced from my first wife. In that case I made myself a coffee table that is a 2' x 4' replica of the Williams Arena floor from the last 1-2 years before the renovation. If anyone is interested, I can do another post on that project later this year during the basketball season. A few of the lessons I learned from the Williams Arena table I would apply to this project as well. I am pretty proficient with painters tape and an Xacto knife now.

The first step was to find the right style of stoneware jug. It's extremely easy to find a variety of stoneware jugs on e-bay in all shapes and sizes. The LBJ is a beehive style jug, and holds approximately 5 gallons. If you spend any time searing for a 5-gallon beehive jug, you often will come across Red Wing 5-gallon jugs for several hundred dollars depending on the condition of the crock. For this project, I think a generic jug works just fine. I didn't want to be the guy to ruin a "collectible" piece that someone else would want.

As my luck would have it, a 3 gallon beehive jug came up for sale the week of the Minnesota-Michigan game. The auction ended within 3-4 days of the game, and I knew I had to have this one. I won the auction for $44, surprised that nobody else had bid on it. Two days later I would have my jug!

Thursday of that week comes, and I see a nice package at my front door. I'm in a great mood, but as I go to pick the box up, I hear the classic sound of broken ceramics. To my dismay, the US Postal Service had broken my jug (and my heart....well just my jug). This is what I was presented with: 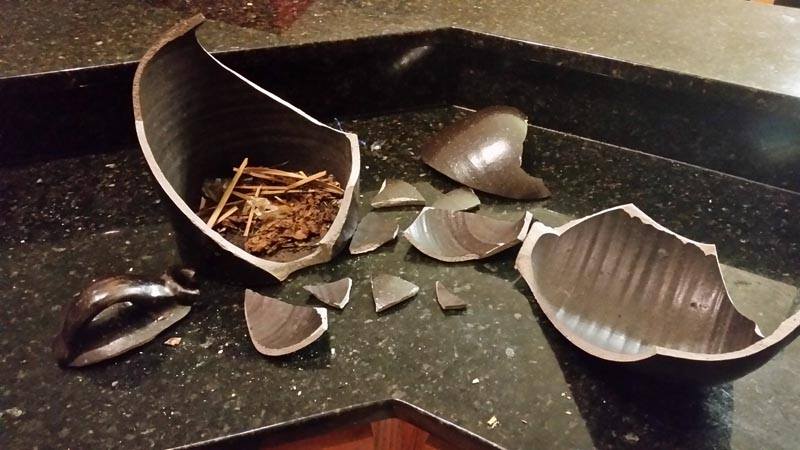 On the plus side, I got to see what years of sitting in a barn will leave inside a jug. Protip: never drink from one of these, you will die or become very ill, but probably die. Eventually.

With a geology degree I figured I should be able to fix stoneware, right? My parents came down for the homecoming game since my wife would be busy coaching. I used this as an opportunity for an insight in how to fix this jug, since I had helped my mom learn this type of repair once or twice as a toddler (allegedly, I blame my sister). After getting all of the pieces dry fit together to make sure we could even keep it together, I used Elmer's glue to repair the jug over the next 3 days. The pieces held together very well. A few chipped spots remained after putting the jug back together, so I used some epoxy putty to fill in any of the larger chips. Some sanding with 3 grades of sandpaper later, I had a jug essentially in one piece again. 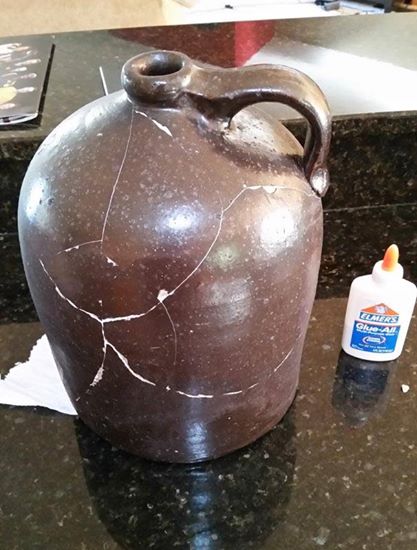 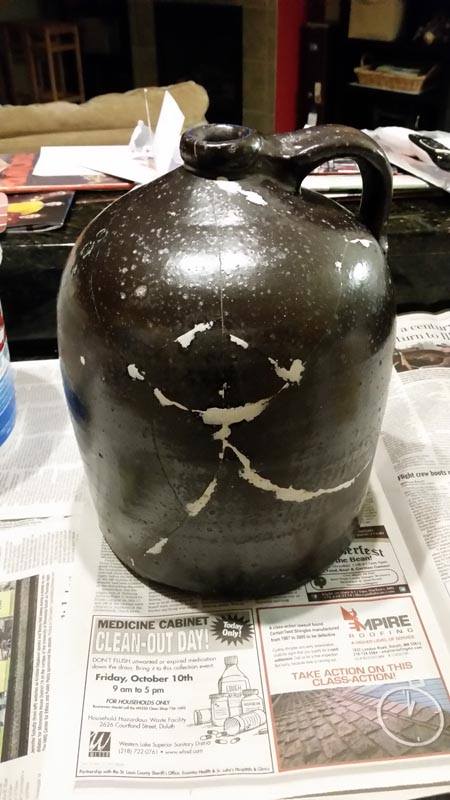 Having just moved this summer, I had some primer left over from the painting we did, so I just used some Kilz to prime the jug. Roughing up the surface with sandpaper will help the paint stick to the stoneware better - something I learned by fixing this jug. When the jug was all primed, it looked like a brand new Red Wing just missing the old Red wing logo. 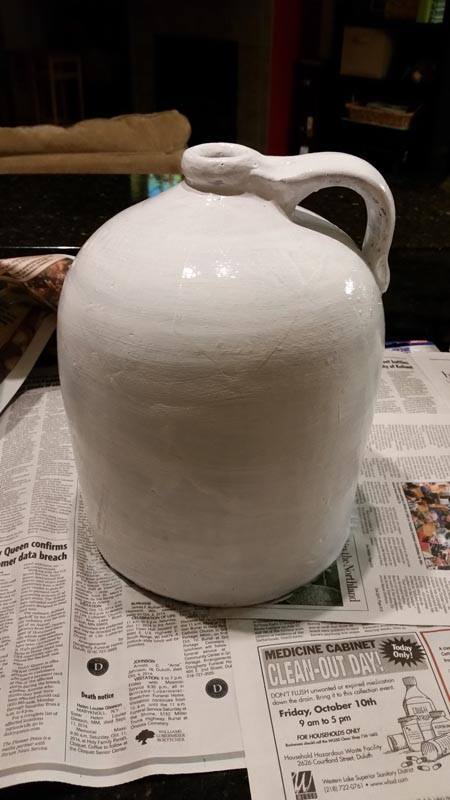 Now the fun could begin. Using painters tape, I taped off each side to paint the maroon and blue sides of the jug. It took about 3-4 coats to completely cover each side. I tried to approximate the colors as best I could. The maroon on the jug looks redder in some photos, and browner in others. I went with a shade of maroon I thought was close enough. 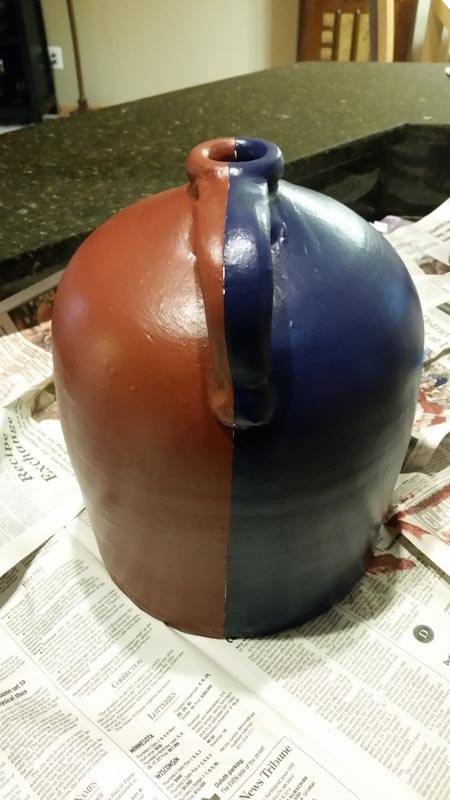 A small detail on the real trophy is the thin gold line that separates each side. For this line and for the Michigan M I chose to use the left over "Minnesota gold" I have from the Williams Arena table. The handle was the hardest part to tape off, as I learned in the previous step the the potter who made this jug (or at least put the handle on) didn't understand symmetry. 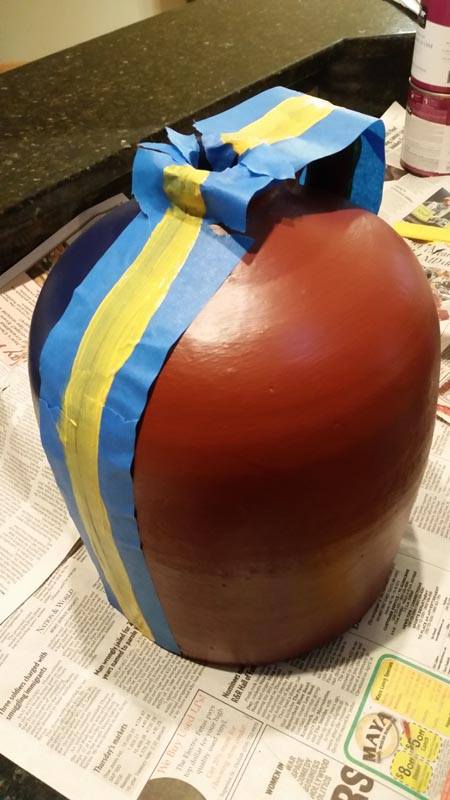 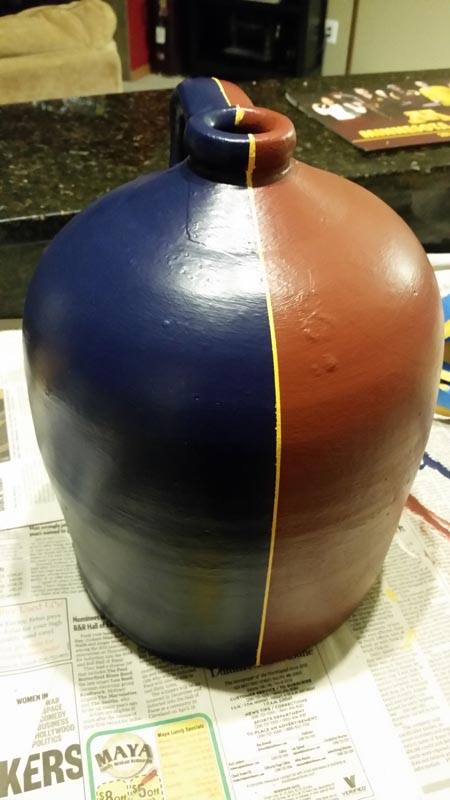 The hardest part of this whole project was scale. The real jug is 15 7/8" high. This one is about 13". I used my handy engineer's scale on a picture of the real jug to scale down the school Ms. Once I had the approximate measurements, I graphed out the Ms on paper, and then used clear packing tape to place the paper template over the painters tape prepared jug. Once the M was cut out, I painted over the template with the school color, and then applied the maize/gold. To get the metallic gold look on my jug, I picked up some spraypaint with a metallic finish, and used the Gopher gold for the Michigan side. 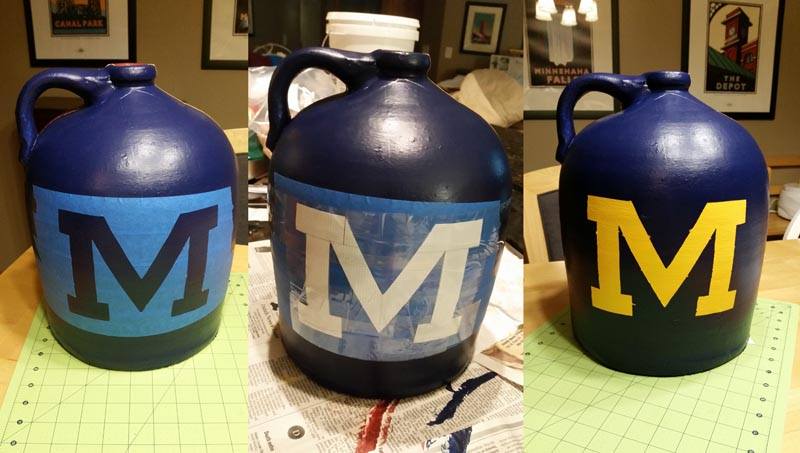 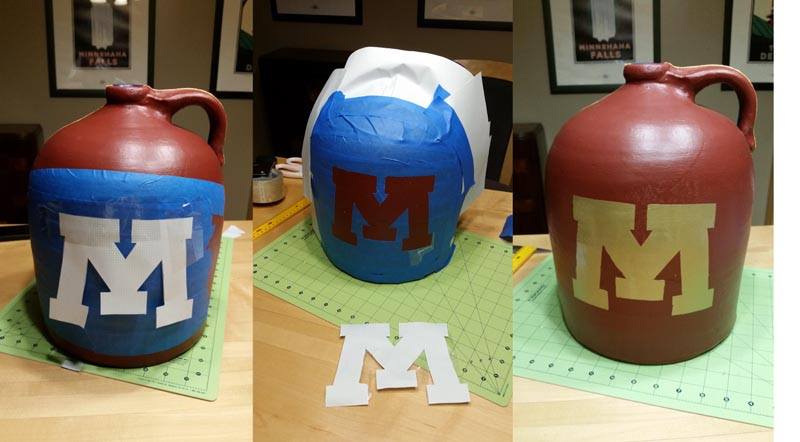 Another lesson learned: Our block M is much more difficult to get correct on a curved surface than the straight lines of the Michigan M.

At this point I want to mention one mistake I see the Michigan jug bros making. The Minnesota M on the jug is more compact to fit in the same approximate square sized area as the Michigan M. A lot of the replicas I see use the more modern spread out M, and thus their dimensions look....awkward. In my mind I call this the "1970-80s hockey M" since that is where I saw it first.

Running down the home stretch, the score columns were painted. Next time I will just mask off these areas rather than have to repaint them, since I used the same primer. Extra work for no pay!

Rather than make infinite mistakes with black paint and having to tape a million lines, I used a sharpie to put the scores on the Jug. Here is a before and after of the score column: 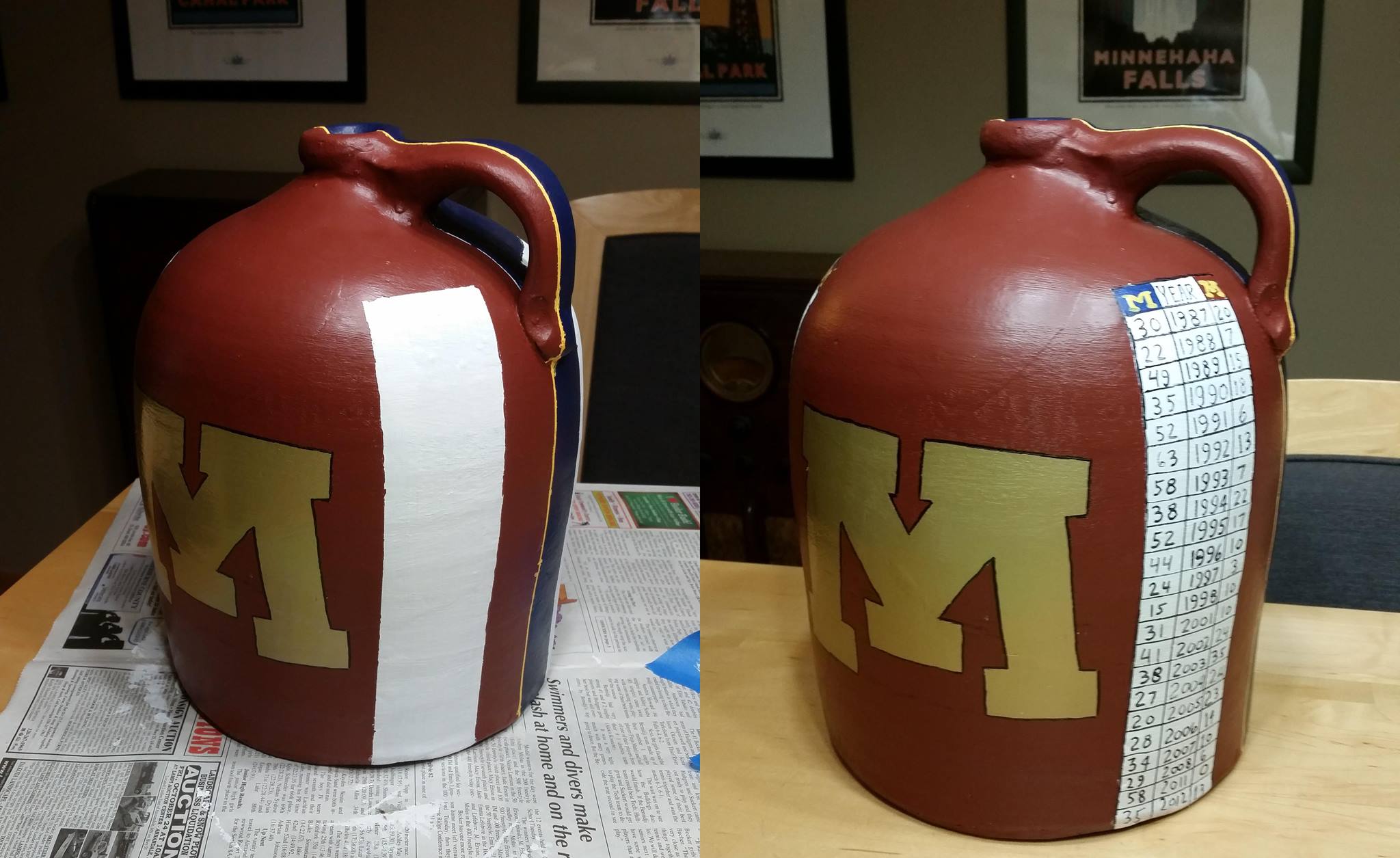 Sidenote: Writing the scores on is extremely depressing from a Gophers fan point of view. My bottle of choice for this piece of the jug was Grain Belt Premium (and maybe the Wild Turkey stashed in the kitchen once I got to the games that shall not be mentioned).

And finally, the finished product:

Overall, I am happy with the way this project turned out. There are mistakes I made that bug me a little, and I will eventually fix some of them after I take a break from this for a while. This was a good learning experience, and it is a piece of Gopher lore I can display in my house alongside my band and Gophersports memorabilia. I tailgate at the River Flats and this may or may not make an appearance there in the future.

From start to finish this took about 20 hours worth of work, with 5 of that being jug repair. When I find the properly shaped 5 gallon jug I will gladly repeat the whole process over!

Have you made anything similar Gopher related? Show off your work!