Paul Bunyan's Axe and Chopping Down Posts: Tradition, or Nah?

Wisconsin fans talk like chopping goal posts with Paul Buyan's Ax is a tradition as old as the trophy. But is that really true?

Share All sharing options for: Paul Bunyan's Axe and Chopping Down Posts: Tradition, or Nah?

One of the interesting things to come out of the last two Border Battles with Wisconsin is the widely held belief that chopping down the goalposts is a long time and sacred tradition. This claim is usually accompanied by the assertion that it's Minnesota's fault that this tradition is being ruined. But is that really the case?

How do you create tradition when your program's success doesn't start until the 1990s? You start making stuff up.

Wisconsin defensive tackle Beau Allen told reporters, I think jokingly, that teams have chopped both goal posts in all 123 years of the rivalry.

The Gophers & Badgers no longer played for the original Ax.The original was donated to the College Football Hall of Fame back in 2003 (so blame Maturi for this 10 year drought against Wisconsin).

Admittedly that's a really trollish way of starting this post. But once Gary Anderson turned the Ax protocol into an issue and Badger fans across the internet blamed the whole thing on Minnesota's "upending" of the chop tradition I've been wondering...just how old is this 'tradition' of using the Ax to chop down the field goal posts? 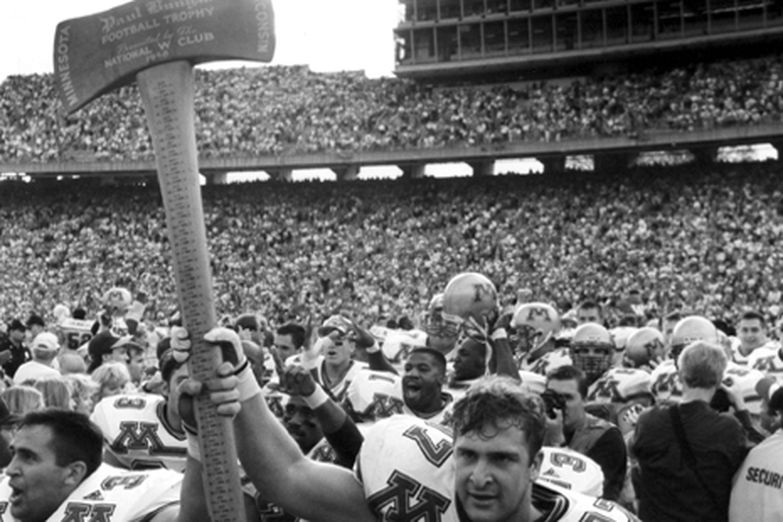 The bottom line is I don't know. However, I've called former University of Minnesota's Athletic Department employees, watched old games, and read newspaper stories going back to the start of Paul Bunyan's Ax in 1948, and I can't find anything that mentions chopping down field goal posts before the 1990s. The oldest direct quote about chopping down field goal posts comes from Darrell Bevell (!) who quarterbacked Wisconsin from 1992-95:

I know I was the first person to get the axe. I then went over to the goalposts to try and cut them down. What a great feeling.

(A quick aside, we aren't in England, it's just "ax". It grinds my gears but "axe" is the British way of spelling it. (I know I'm not winning this fight))

In talking with old employees who worked for the Athletic Department in the 1960s and 1970s they all said the same thing: chopping down the posts wasn't something that was done back then.

Chopping down field goal posts doesn't feature in old film reels or newspaper stories at all. This game clip from 1967 doesn't even show the Ax. A search of newspaper articles about the subject doesn't turn up anything until the 1990s and early 2000s. 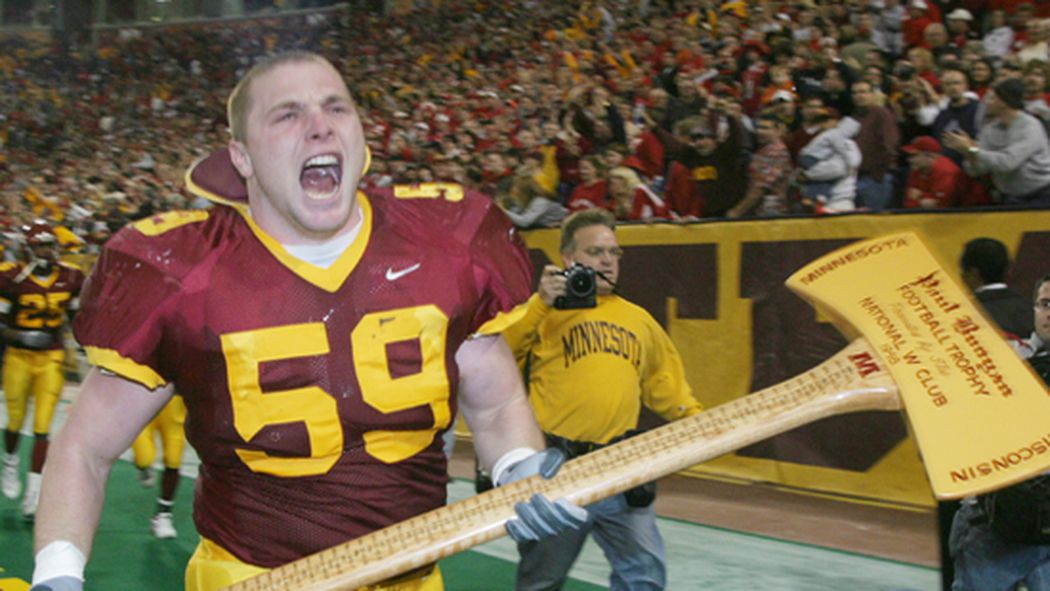 Maybe it happened but wasn't covered. I kind of doubt it though. If you want my best guess I think the practice was started in the 1980's (at the earliest), and probably at the Metrodome since there is nothing to suggest it happened at Memorial Stadium while the Gophers still played there. Whether that's long enough for it to be considered a tradition, Badger fans who claim it has always been a part of the rivalry need to do some work to prove they're correct.

NOTE: I'd be happy to listen to anyone who has memories that go back further than mine about this. Ax history is fun history!