The story of me visiting the Slab of Bacon and my take on it's controversial history.

Share All sharing options for: #TBT - Thankful For Bacon

Today I am thankful for getting to see the Slab of Bacon on a trip I took back in September to Madison. I traded in all of my internet cool points to get into Camp Randall and get a tour. At first everyone played dumb, "I thought it was lost...?" is something I heard at least twice, but I persisted and played the "historian interested for purely scholarly reasons" card (which worked! suckers). 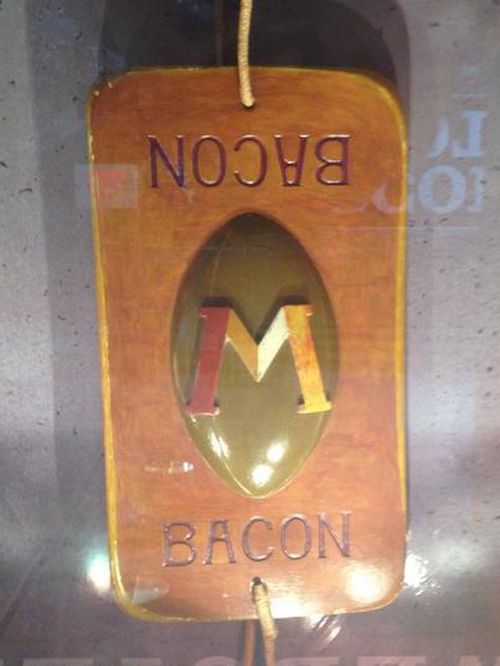 This is as close as they would let me to the bacon.

Anyway, I am happy to report that our trophy is doing well. It has recently been moved to the Football Office which is on the top floor, impressively over looking the field, with all of their other (non national championship) trophies. I asked if it could be taken out of the case so I could better examine it, unfortunately they saw through my scheme to steal it back and didn't allow me to hold it.

The Slab of Bacon is in a corner and isn't really a focal point and apparently is almost always overlooked when people visit the Football Office. This neither surprises me nor pleases me. 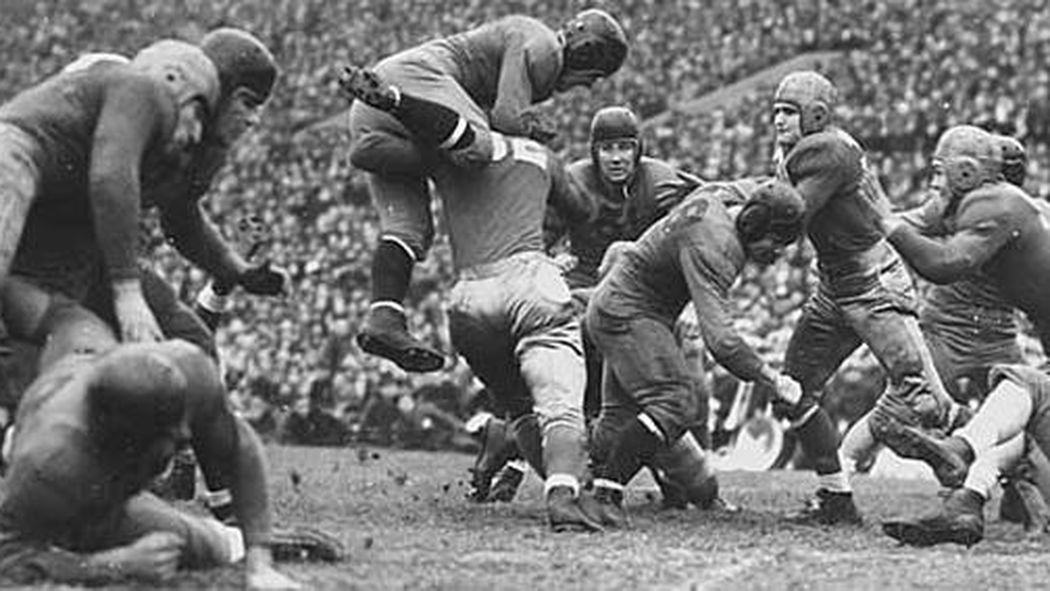 Slab of Bacon game, sometime in the 1930s. Via MNHS

To quickly catch everyone up. In 1930, Minneapolis doctor and Gopher alumnus R.B. Fouch carved the Slab of Bacon in the hopes it would catch on like the Little Brown Jug. The Slab was lost after 1943 game, and reportedly was kept by Wisconsin when Gopher Coach Dr. George Hauser  refused it saying "such trophies should be out for the duration [of World War II]." The Slab went back to Madison where it was promptly "lost" until Barry Alverez found it in the 1990s.

Several twists to that story. One being I kinda doubt the good doctor Mr. Fouch created the trophy for only virtuous reasons. The Slab of Bacon was awarded to the winning teams sorority by the losing teams sorority (which sororities, and where it was kept the rest of the year I don't know). Personally I think Fouch was tryna get after some co-ed's. Also that trophy swap set up implies that neither University took it very seriously.

Another thing to consider is by the time the trophy went missing the rivalry was rather one sided with Minnesota taking 32 games while only dropping 16 to Wisconsin (and tying 5). The Slab was played for 13 times with Wisconsin only winning it on three occasions. What I'm suggesting is that Wisconsin saw a chance to keep something it rarely won and took it.

My theory is backed up in a couple ways. First Wisconsin's Peg Watrous who was supposed to give the Minnesota's sorority counterpart but couldn't find her, and was later quoted, "The whole thing was a dud as I feared it would be, and someone in charge probably hid the bacon."

In talking with old timers from the University of Minnesota they knew Wisconsin hadn't lost the Bacon. In fact the facilities man at Wisconsin 'Oddie Dick' (what. a. name.) would occasionally brag about the Slab of Bacon. Indeed the Slab was found in Oddie's suitcase in the 1990s with all of the scores painted on the back of it.

Final thoughts: screw you Wisconsin. And screw you Coach Hauser, I know that World War II didn't suspend playing for the Little Brown Jug or Floyd. Also if you are going to Camp Randall this weekend there is a replica of the Slab underneath the stadium. And lastly when the Gophers win on Saturday I say we "lose" the Ax until Wisconsin forks over our Bacon.