It's just about time to drop the puck on a pivotal weekend series for our Gophers. Somehow, we haven't seen one of the most storied programs in college hockey history in our inaugural B1G Ten season. Here's everything you need to know about the Wolverines.

I don’t need to fake hatred to for the Michigan Wolverines. They ruined the Gophers’ season in 1996 with one of the most famous goals in college hockey history. Just in case you don’t remember it…

There’s a pretty good write-up (if you care to read a story full of quotes from Wolverines with a couple quote from Doug Woog and some Gophers) which can be found here.

I hope that story and that gif get your blood up when you read/see them. They certainly get the rage pumping in my veins, and I was only ten years old when this game occurred. I was sitting on my parents’ bed watching the game in the second floor of our old house. The walls were blue, the carpet was blue, and if I remember the goal properly, the sky was falling for the better part of two hours. My hatred of the Michigan Wolverines is real.

This year’s iteration of the Wolverines has a good 14-7-3 record, and swept Wisconsin two weeks ago. More recently they put a seven spot on Penn State last Friday, only to get shutout on Saturday, giving Penn State its first, most delicious (for me), B1G Ten Victory. Other than a bad stretch around the Christmas break, the Wolverines have been consistently solid all year. They play just as well on the road as at home in Yost.

Michigan does not possess a powerhouse offense; they average fewer than three goals per game. The team’s two offensive stars are freshman JT Compher and sophomore Andrew Copp, who account for 22 of the team’s 69 goals for the season. After the two young guns, upperclassmen round out the scoring. Keep an eye out for Alex Guptill (junior) and Luke Moffatt (senior), both have eight goals on the season. The Wolverine’s roster features nine freshman skaters, but outside of Compher and Tyler Motte, who has seven goals, the class does not account for much scoring.

The defensive corps is very good at keeping the puck out of their own net. Unfortunately for the team, they’re not great at putting the puck in the net. Defensemen do not account for much scoring; only senior Mac Bennett and freshman Michael Downing are the only defensemen who have scored goals.

The prevailing wisdom coming out of Ann Arbor is that freshman Zach Nagelvoort has solidified his position as the starting goaltender, even if that arrangement isn’t official. This isn’t a great surprise, as he’s appeared in nineteen of Michigan’s 26 games. He’s the third excellent goaltender the Gophers will face in as many series. He allows just fewer than 2.12 goals against per game and makes the stop on no less than .930 of shots faced.

Nagelvoort’s "backup," if he can be called that, is sophomore Steve Racine, who’s save percentage is also .930. So, there’s some truth to the notion that Nagelvoort is #1 and Racine is #1A.

Settle in for another weekend of defensive hockey, Gopher fans. These are two teams who play excellent defense. The Gophers allow a shockingly low 1.96 goals against per game. The Wolverines allow only 2.33. Throw in the outstanding goaltending on each side (Vote for Adam Wilcox for Hobey Baker here!), and we can expect two more low scoring games.

Over the last four games, the Gophers have scored only five goals. They’re going to have to turn that scoring trend around to have success this weekend. I’m sure the offense has been a point of emphasis all week, so here’s what I think (hope) they worked on.

First, don’t turn up shots. I know that the Gophers have seen excellent opposing goaltenders in the past two weeks. Too often, however, they’ve attempted to beat that goaltending by making passes. They haven’t connected on those passes, and thus they haven’t scored. In Particular, I’d like to see Mike Reilly change his focus from pass-first to shoot-first. If the passes aren’t working, you might as well shoot.

Shooting has three possible results (if you put the shot on goal and don’t miss wide or high): a goal, a save, or a rebound opportunity. Two of those results are good. Conversely, passing has two possible results: a shot, or not a shot. Only one of those results is good when you’re looking for offense. I know that I’ve oversimplified hockey in this paragraph, but this is the mentality I want to see this weekend.

Second, be greedy. This ties into my first point, but I want to see some individual hunger to put the puck in the net and earn a star for the weekend with a blurb on the B1G Ten website. Don’t get me wrong, I enjoy four tape-to-tape passes that end in a wide-open goal mouth, but I want to see someone take the puck this weekend and bury it in the net with sheer willpower and determination. In particular, the two players I want to see display this attitude are Mike Reilly and Sam Warning. When those two put the puck in the net, the Gophers are a dangerous team.

Third, shoot quickly. There’s a reason the Gophers have seen so many of their shots blocked: hesitating before shooting. Even a half-second hesitation before pulling the trigger allows defenders and goaltender to move into the shooting lane. The decision to shoot needs to come before you have the puck on your stick. This point is tied into my second point in that regard. It takes a somewhat greedy, killer instinct to make that decision before you have the puck, and even better if you can make that decision before you even think that you might get the puck.

So sue me if it doesn’t make any sense in the context of this series. Don’t pretend like you didn’t watch the whole clip. You did. Plus it’s timely. USA! USA! USA! 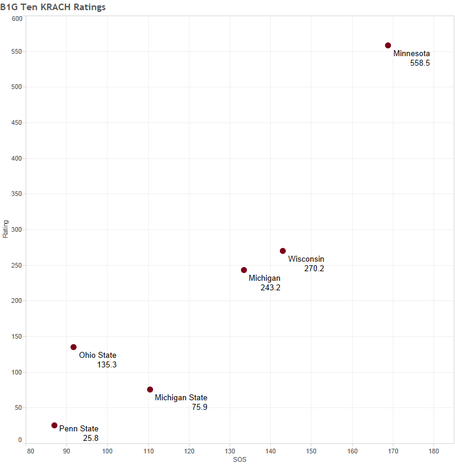 While the KRACH numbers still weigh heavily in the Gophers’ favor, I’m going to step away from the model this weekend. I can’t believe I’m saying this, but we’re going to see one heck of a defensive battle this weekend. Personally, I’d prefer a offensive shootout. Defensive battles hinge on tiny details in the defensive zone. Two little mistakes or two well-placed shots can decide a game. The good news is that it looks like Tom Serratore is likely to return to the lineup Saturday, and could even play Friday night, which will be a big boost for the Gophers in a grinding weekend.

The Gophers need a sweep. It would be absolutely huge in the conference standings to pull down six points this weekend, and it would take a lot of pressure off the upcoming games at Yost. For these reasons, I hope I’m wrong, but I’m calling for a split. Michigan 3-2. Minnesota 3-1.

The Gophers will honor John Mayasich before Fridays game. It should be a cool moment considering the Olympic hockey tournament is now in full swing, and Mayasich played with the US national team eight times, including the team that won Gold at the 1960 Olympics.

Gophersports.com has a better writeup on it than I could hope to write, so follow the white link rabbit for more!