The University of Minnesota's Women's Hockey Team clinched their second consecutive and eighth overall regular season WCHA Championship this weekend with a sweep of #2 ranked Wisconsin.  The Gophers clinched the title with a 3-2 win on Friday, and completed the sweep in the Fill the Bowl game held in front of an NCAA record 13,573 fans 4-0 on Saturday.

Friday night, the Gophers got off to a slow start as Wisconsin took a 1-0 lead after one period.  Junior Rachel Bona tied the game at one just over five minutes into the second when she took a shot from the edge of the crease that bounced off of a Wisconsin player and past Badger goalie Alex Rigsby and into the net.  The period ended tied at one.  Minnesota struck first in the third as a Millica McMillan power play blast from the point wound through traffic and past Rigsby.  The Badgers struck back quickly to the tie game at two goals each.  The Gophers finally got the clincher when Freshman wing Dani Cameranesi took a great feed from Junior Rachel Ramsey and buried it past Rigsby.  Wisconsin put on a furious flurry at the end of the third, but couldn't get another shot past the Gopher goalie, Sophomore Amanda Leveille.

Here is a recap from the Badger perspective:

Saturday night, the teams would be playing at the Kohl Center instead of LaBahn Arena, the Badger women's team usual home.  It was a part of the annual Fill the Bowl game by Wisconsin where they sell tickets for $1 and encourage people to bring food for donation to a local food shelf.  They would end up drawing an NCAA record 13,573 fans who would see the #1 ranked Gophers put on a clinic. 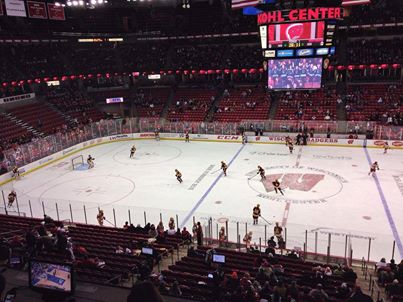 Once again Minnesota started slowly, but so did the Badgers, and both teams were scoreless after one period of play. Ten minutes into the second period Minnesota finally broke through and Kelly Terry buried a shot past Rigsby to give the Gophers a 1-0 lead.  Hannah Brandt would add her 19th goal of the season late in the second, and the Gophers took a 2-0 lead to the second intermission.

In the third it was all Gophers as it appeared that the larger sheet of ice was taxing the Badger players, but not Minnesota.  Bethany Brausen scored her fourth goal of the season 2:51 into the third period, and then Meghan Lorence added her 15th of the season to cap off the scoring for the Gophers.  Leveille was once again brilliant stopping all 24 shots she faced for her eleventh shutout on the season.

What an awesome weekend of hockey! Nothing better than sweeping on the road in front of a sell out crowd! Grateful to be a gopher today!

Great weekend for #GWH! Wisco's always a tough opponent and wins vs them never come easy! Great to get the sweep!

What a weekend for @MNWomensHockey--NCAA record setting crowd, WCHA league champs and came away with the sweep #BorderBattle #GWH

The win moves the Gophers to 30-1-1 on the season.  They have now won the last ten games against Wisconsin and are undefeated in their last twelve against their rivals.  They also are now an absolutely insane 44-0 in their last 44 road games.  It will stay that way until next season as the Gophers will finish their regular season next weekend back at Ridder Arena against Minnesota-Duluth.  The Gophers will then host the first round of the WCHA playoffs the next weekend before baring an upset of historic proportions, heading up the Bemidji for the WCHA Final Face-off.

The Gophers will play at 7:00 next Friday and 4:00 next Saturday.  Saturday will also be Senior Day for four Gopher players: Bethany Brausen, Sarah Davis, Baylee Gillanders, and Kelly Terry.  With the men having the weekend off, come check out and celebrate this amazing team and these awesome players!