The Gophers got back into the win column with a weekend sweep of the Michigan Wolverines.

Well, that’s more like it. Just one week removed from being swept in Madison, the Golden Gophers rebounded and swept the Michigan Wolverines in Minneapolis. The Gophers returned to form: the offense found its scoring touch and Adam Wilcox churned added two solid performances to his Hobey Baker resume’.

Wilcox allowed four goals in the two games against the Wolverines, which actually damaged his goals against average. Michigan put three goals past Wilcox on Friday night, the first three goal game he’s allowed since January 25th against Minnesota-Duluth. The Wolverines piled 38 shots on net on Friday, so Wilcox’s save percentage on the night ended up north of .92.

For both teams, Saturday’s game was a different story defensively. The Gophers limited the Wolverines to 29 shots, and other than the first shot of the game, Wilcox was equal to the task on each one. The shots on goal are probably a bit deceiving; the Wolverines had about fifty two-on-one opportunities in the second period, and for some reason they absolutely could not connect on pass each time. Still, after the first shot of the game, Wilcox shut down the Wolverines scoring.

The most important stretch of goaltending on Saturday occurred in the first ten minutes of the third period. Michigan controlled the play for the entire first half of the period, and the Gophers didn’t manage a shot on net until Hudson Fasching’s goal at 8:37. The Gophers had a comfortable two-goal lead to start the period, but Wilcox protected that lead through a scary eight minutes.

In the previous four games, the Gophers scored only five goals. In that four game stretch, they posted a 1-2-1 record, so it was pretty obvious coming into the series that something had to change. In the four-game stretch, I though the Gophers were looking to pass instead of shoot, and they were passing up shooting opportunities.

Well, somebody at Mariucci listened to me (I find that statement highly improbable), and the Gophers came out Friday night with a very different attitude. Not only did they completely dominate the first period, but they also put sixteen shots on net, just over 0.75 shots per minute. Michigan’s Steve Racine stood on his head and only allowed one goal in the period, but the message was pretty clear: the Gophers were not going to be held to one goal. The team attempted 33 shots in that first period.

Justin Kloos took to the advice more than most, firing off six shots in the game, followed closely by Sam Warning who fired five. In total, the Gophers would throw 37 shots on goal from 75 attempted shots. Looking at the shot chart for the game, I’m impressed how many shots the Gophers attempted from the slot and right in front of Racine’s crease. I counted over thirty shot attempts from that high value area.

Saturday’s strategy on offense did not include the gaudy shot attempt numbers from Friday. However, the shooting attitude was still in place, and it was embodied in Connor Reilly’s second period goal. Reilly carried the puck into the Wolverine zone on an odd-man rush against one defenseman and get this: he didn’t try to make a pass for a one-timer. Instead, he wound up and blasted a slap shot over Racine’s shoulder. His goal embodied the shoot-first attitude I wanted to see this weekend.

If the Gophers are going to keep their offense numbers up, they’ll need to keep that attitude.

In his post-game appearance, Reilly mentioned that El Padrino brought the fourth line in for a meeting last week to talk about the need to increase production. Actually, Coach Lucia brought this up in his remarks as well, but the acoustics outside the Gopher locker room are not great and background noise washed out basically everything he said.

Gopher did not have a stellar weekend defensively. They only allowed four goals on the weekend, but the majority of that success should be attributed to Wilcox’s efforts and not to the skaters. Michigan attempted 70 shots on Friday, 38 of which made it onto Wilcox. That’s not the type of effort you’re looking for defensively.

What they defenders did well on Friday was clog up the shooting lane. They blocked 20 shots over the course of the game. While that shows a lot of heart, I’d prefer to prevent shots by controlling the puck more and sacrificing bodies less. It would also be good to no lean quite so heavily on Wilcox’s ability.

I’d like to be able to say that the team did a better job on Saturday of preventing scoring chances. The shots on goal would lead you to believe that they did, but Michigan still attempted 65 shots in the game. What was more concerning, however, was the number of odd-man rushes the Wolverines had, particularly in the second period. If the Wolverines were capable of connecting a pass or putting a shot on goal in a two-on-one situation, this game might have ended differently.

The problem with two-on-ones against is that they’re the result of bad decision making. I’m fine with the forwards being aggressive, and I know that the Gophers rely on their defensemen to generate offense, but they have to be better at picking their situations.

In the last two periods of the weekend, the Wolverines attempted 26 shots from what I would consider the high value scoring area. This is the result of defensemen not doing their job properly. Namely, they were not working from the net out to the boards. When a defensemen ends up on the wrong side of the forward he’s supposed to be covering, bad things happen. A football analogy is a defensive end loosing containment on the quarterback. It’s not necessarily going to result in a touchdown, but it’s not going to fun for the end to see on film either. 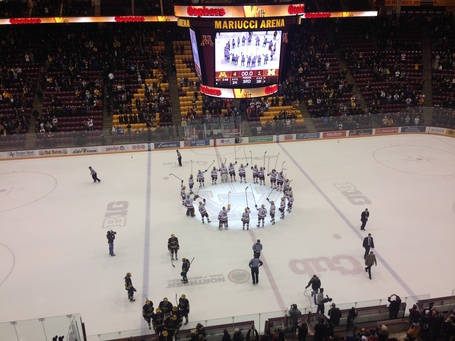