Your weekly look around the hockey conference.

If the season ended today, Penn State would face Michigan in the B1G Ten Tournament. That’s good news for Penn State and terrible news for Michigan. Guy Gadowski has clearly discovered the formula to beat the Wolverines. Unfortunately, Michigan is the only team the Lions have figured out how to beat, which is still hilarious to me. While it’s still technically possible for Penn State to climb out of last place, the gravity of the basement is drawing them in like a black hole. Time will tell if Gadowski has one last photon torpedo to drop behind the engines to blast his team away, but I bet the end up a part of the singularity. Next for PSU, they fall into the Gophers' cross-hairs at Mariucci. Penn State wins this week’s "Star Trek GIF FTW" award

The Spartans fell into the death trap that is the Kohl Center last weekend. Most teams have, so I guess they shouldn’t be too embarrassed by it. Personally, I blame the Swedish style dimensions of that arena, but the Spartans really shouldn’t be allowed to complain about anyone else’s arena. The Spartans will surely have their revenge in a couple of weeks when the Badgers make the trip to East Lansing. Michigan State was 0 for 7 on the power play on the weekend, not surprising considering their lack of scoring talent. For continued offensive futility, the Spartans win the "Learn the Layup" award.

The Buckeyes were idle last weekend (not that anyone in Ohio noticed). After performing an in-depth Google search for Buckeyes news, I discovered there hasn’t been any for almost ten days. Fear not, Buckeyes, I will tag you in this post so that when you Google yourselves you’ll have something fresh to read. I really don’t feel like piling on to OSU’s hockey attention woes if gif form, so here’s a snip of the front page to their hockey team’s website. Let me know if you see anything off. 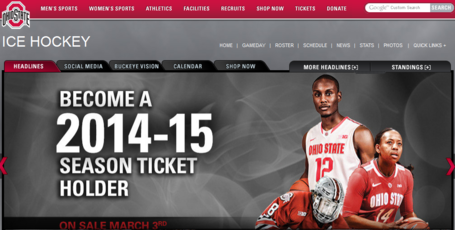 Four straight conference losses have nearly ruined the Wolverines’ season. They’re now tied for 14th in the Pairwise, and they’re all but eliminated from the conference championship race. I’m going to ahead and say that Michigan was swept by Penn State in a two game series, but managed to get also swept by the Gophers between the two losses to PSU. I don’t care if that’s how most people would see it. Four straight losses = two sweeps. Red Berenson better figure out how to get his team’s center of gravity back in the limits or we’re going to be seeing a lot of plane crashes in this feature each week. Too bad for Berenson that his team is out of patsies to beat up on: Ohio State, Michigan State, and Minnesota are all that remain on the regular season schedule.

The Badgers managed to sweep Michigan State at home, and while that’s not the most impressive sweep in college hockey, it’s what they needed to do to keep the pressure on Minnesota in the race for the regular season championship. The Badgers are now within one point of the Gophers on the Conference table, but have played two games more than our favorite team. Wisconsin only has four games remaining on their schedule (12 possible conference points), which means that the Gophers need twelve points out of their last six games to win the conference outright.

The bad news for Badger fans is that all four of their remaining games are on the road, where the Badgers are awful, at the surging (haha not really) Penn State and defensive minded Michigan State. Even one loss makes the Gophers road to hardware much easier, so all the pressure is squarely on the Badgers at this point. Wisconsin wins this week’s "Murder Train A'Comin’" award for their inbound disappointment.WARNING: GRAPHIC GIF OF MAN BEING STRUCK BY LOCOMOTIVE BELOW.

Aren’t off weeks the worst? Hopefully the Gophers will carry some momentum off their sweep of Michigan into this weekend at against Penn State. The Gophers played two solid games against the Wolverines, contributing to Michigan’s cannonball like descent in the Pairwise. The time off came at a good point in the season, in my humble opinion, because it gave the team some time to mend some bruised bodies and refresh some legs for the stretch run.

I know I say this every weekend, but the two games this weekend are critical for the Gophers. A sweep of Penn State will make the Magic Number two games, regardless of the outcome of Wisconsin’s games. They’re also the last two games of the year to be played at Mariucci, and the road teams in B1G Ten games have not fared too well recently. In short, it’s go time.