Did something cool happen yesterday?

Share All sharing options for: Minnesota Basketball - The Good Vibes Golden Nugz for 2.26.14 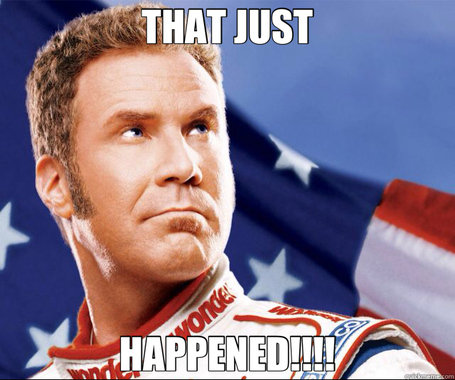 Ok, it's didn't "just" happen but I think we can all be excused for feeling like it did. BASKETBALL LINKS!

- The Gophers are obviously still on the bubble, but this win already has some bracket bros putting them on the right side of the bubble.

- The Twin Cities media really has a problem with Gopher fans. At least Powers didn't talk about baking in this story.

- This was linked in the comments of the Kill contract post but in case you missed it, the U also included language in the new deal that allows them to void Kill's contract if he is unable to coach for 90 consecutive days total or 70 consecutive days during the season.

The new contract says "the agreement shall terminate automatically" if he is unable to coach for 90 consecutive days, or 70 consecutive days during the season. In that scenario, Kill would remain a university employee on leave of absence and would be able to seek disability benefits.

The language seems to be unique for the university. Past contracts for head coaches, including Kill’s previous contract and Glen Mason’s contract, did not include terms specific to missed workdays.

Under the category "Post-Coaching Employment," the contract goes beyond an extended health leave and states, "During the term of this agreement, the University and Coach may mutually agree to transition Coach … to an agreed upon position with the University," paying $200,000 per year.

I want Kill to succeed here and coach until he's ready to retire. But I have to applaud both the U and Kill for recognizing the unique situation they are in and negotiating a deal that covers both sides fairly in the event that things don't go like we hope. Lots of respect for that.

- Kill really appreciates the investment the U is making in football. Best quote:

"I think you'll see a lot of things happening here in the next year and a half that will be beneficial, not only to our football program, but it will emphasize how important it is to our state to say they've made a commitment to our whole program."

- Did you know that the NCAA made some rules changes that will let Kill spend more time with the players this summer? Kill did and he's excited!

The NCAA agreed on the eight-hour weekly workout rule for eight weeks of summer in football in October. It had already been in place for basketball. The only difference is that Football Bowl Subdivision players can only interact with coaches for team video, weight lifting and conditioning sessions.

"We can actually, instead of voluntarily, we can go ahead and make them lift weights, which has not been in the past," Kill said Monday. "Then you get a chance to spend time with them in the film room. It’s still got to stay within the eight-hour rules. We can’t go out there and practice with them. But the NCAA has bent a little bit so you can actually have some meeting time."

- Also, it seems like a nice time to link to this piece on Kill's plan to build a program with fundamentals (originally published back in 2011).

- The Gopher Wrestlers have finished the regular season ranked #1 in the USA Today Coaches Poll.

- Do you like pointing and laughing at Bret Bielema? Stewart Mandel explains why you aren't alone.

- The Big Ten is considering adding Friday night football games. THIS IS WHAT HAPPENS WHEN YOU INVITE A JERSEY FOOTBALL TEAM INTO YOUR HOME DELANY!

The Big Ten could step in and own Friday night. Make it the league’s own: "Friday Night Big Ten Football." Get a title sponsor. Write a theme song. Hire an A-team announcing crew. Lots of possibilities.

I am sure a TV network would play handsomely for such a package, just as we have seen the networks dole out massive sums of loot to the NFL for its Monday, Thursday and Sunday night TV packages.

The Big Ten is leaving a lot of money on the table sticking to a largely traditional TV scheduling format of Saturday games. The league should schedule a package of attractive Friday games, and put the product on the table for networks to bid on, and go from there.

Look, I love night games. But this is getting rediddlydarndiculous (h/t to Ned Flanders). But ya know...

- Wait, you thought the B1G was only going to screw up football? You poor deluded soul...

With the Big Ten expanding to 14 teams next year, its basketball squads will play each other less frequently in the future.


Mark Rudner, the Big Ten’s senior associate commissioner for television administration, said the league will continue scheduling 18 games, but the format shifts to five double-plays and eight single-plays each year. It will be a true rotation without protected rivals or preference to geography.

...
Rudner said there was no push to protect instate rivalries, such as Purdue-Indiana or Michigan-Michigan State, to play twice annually. Also, there was no real interest for an unbalanced schedule where regional rivalries like Iowa-Wisconsin or Michigan-Ohio State would play more often than other series.

I'm not going to pretend like I have a great solution for the problem. I'm just going to blame Rutgers, Maryland, and Scrooge McDelany's penchant for swimming in money.