Another B1G Ten Hockey weekend is in the books, and we saw some movement up and down the table. Have a look at what each team accomplished.

I was really sure that Penn State was going to pull out their first conference points of the year against Ohio State. Instead, they got blown of the arena by an aggregate score of 10-3. Sure, they threw 73 shots on net in the two games, but really, that stat just reeks of desperation. Their shooting percentage is atrocious, and they're pretty much doomed to the basement for the rest of the year. I'm not sure they'll earn a single conference point this season. And I had such confidence that they could steal one from the Buckeyes...

How do you like them apples, Michigan State? Yeah they came into town and took another two points in a shootout victory. Sure they led by two goals in the first period due to the Gopher defenses best Marx Brothers impersonation and Villiam Haag's ability to shoot a puck through a defenders abdomen without injuring him. Still, after being spotted a two goal lead, they would squander it. Then, they came out on Friday and got their backside handed to them. If it wasn't for goaltender Jake Hildebrand's excellent effort, they would have been blown out on Saturday. Not only did they fail to snatch the Mariucci-Bessone Trophy, but they also ceded control of the Honeycrisp Trophy back to TDG. Also, a two point weekend was not enough to maintain their fourth place on the conference table. Thanks for coming out.

Ohio State spanked Penn State twice last weekend. I was sure they'd lose one of these games, but they didn't. The Buckeyes managed to leapfrog the Spartans on the weekend. They clearly have the scoring talent to put up gaudy goal totals against bad teams. However, their only good win is against a Wisconsin team that is teetering on falling apart. Their KRACH SOS is bottom quarter. Victories against Penn State are about as valuable as victories against Army.

The conference Greybushes might be in the early stages of a tailspin. They're winless in their last three games. After sweeping Michigan in impressive fashion in their cave, they dropped a game to Ohio State at home and managed only one point on the road at Yost, against the Michigan team they just swept two weeks ago! They lost ground to the Gophers, they lost the number two spot on the league table to the Wolverines. It was a disastrous weekend. Maybe going two months without playing a game on the road was not the best approach after all. In that stretch, they played twelve home games, eight of which were against terrible competition: Penn State, Colorado College, Alabama-Huntsville, and Alaska Anchorage. When AA (who dealt you a loss at home!) is the cream of your mid season competition, you're selling false hope to your fan base. Here's what they looked like last weekend:

After getting swept out Madison two weeks ago, the Wolverines gave Bucky the business and took five out of six points last weekend. Scoring continues to be a problem for the Wolverines, but they play solid team defense. I don't think anyone is too surprised that they battled their way back into the second spot on the table. They are a respectable top ten team in the nation. I need to reserve snark for the next month or so, as I'm sure to be writing about them a lot. I'll leave the Wolverines with this thought: they have the ugliest uniforms in college hockey, hands-down. Look at these things!

Our Gophers picked up four of six points against the Spartans and their ninja goaltender. It was an uneven weekend, the Friday game was not the best game they've played this year, but they pulled out a tie with a third period goal. They might consider practicing the shootout a little more, because they're 1-3 in shootouts by my count. More importantly, they're 0-2 in conference shootouts, the only blemishes on their otherwise untarnished conference record. Still, looking at the KRACH numbers against the rest of the conference gives me a warm fuzzy feeling. Kinda makes me feel like river dancing over the vanquished bodies of our foes.

Dishonorable Mention: Penn State What Were You Thinking

You have got to be kidding me with this, Penn State. This is the most blatant plagiarism I've seen in a while. Pretty soon you'll want to start calling Pennsylvania the "State of Hockey." Also, you have an established tradition of stealing ideas for your team's gear, i.e. those horrible name plates you stole from the Flyers. I'm sure when you realize that "Hockey Valley" won't be a thing, you'll try to rebrand it "Hockey Town." I have an idea, maybe when you score a goal at the Peg, your fans can throw a big squid or a bunch of rubber rats on the ice! Maybe you can also play "Don't Stop the Party" by Pitbull fifty times per game to break the record. This is just disgusting. You might consider winning a conference game before you try to use this. 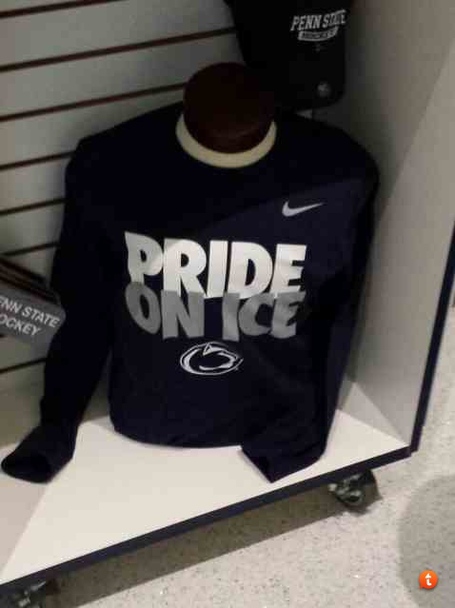