Better Dead Than Red is the mantra this week. In case you've forgotten anything about the Badgers in the two months since we've seen them, here's the essential info.

The Badgers are the most senior team in the conference, sporting nine senior skaters and six juniors. Hence, I’ve been referring to them as the Greybushes. If you don’t get the reference, go see "Grandma’s Boy" and just take that whole movie in. Then, go make me some decent gifs to use.

Three weeks ago, this team swept Michigan in the middle of a two month long, twelve game homestand. In that span, the Badgers earned a 10-2 record against (for the most part) terrible competition. Plus, they lost to Alaska-Anchorage! Here's me, studying their schedule:

The extended home-stand may not have paid great dividends in the end: the Badgers did not look very good last Friday night in Ann Arbor. Their effort on Saturday was better, earning a tie but losing a pivotal conference point to the Wolverines in a shootout. That point lifted Michigan into second place in the conference (and therefore position for a first round bye in the Big Ten Tournament). The Badgers have been terrible on the road this year, posting a 1-6-1 road record.

Unfortunately, they play much better at home, going 13-2-1 in the Kohl Center, where this series is occurring. I’m just glad they’re not playing the second game at Soldier Field this year. I’ll take the cavern over Lake Michigan.

Due to their high number of upperclassmen, many experts expected the Badgers to win the regular season conference championship. It’s hard to argue with the logic that their experienced team would make fewer mistakes than their opponents and turn close games into wins. Unfortunately, this has not always been the case this season. See the below video for a BIG mistake from a senior that turned a close game into a loss. Senior Michael Mersch committed the turnover that led to Seth Ambroz's game winning goal:

The Badgers leading scorers are seniors Mersch (15G – 10A) and Mark Zengerle (4G -21A), trailed closely by senior Tyler Barnes (10G – 11A). Juniors Jake McCabe (6G-12A) and Joseph Lebate (9G - 8A) come in fourth and fifth, respectively. Lebate is tied with sophomore Nic Kerdiles (8G -9A) with 17 points each. In all, six of Wisconsin’s top nine scorers are seniors.

Wisconsin is backstopped primarily by junior Joel Rumpel, but fellow junior Landon Peterson has seen significant playing time as well. This is the second series in a row in which the Gophers will play against a goaltender with very impressive stats. Rumpel allows 2.02 goals against per sixty minutes and saves 92.8% of shots against. For the Gophers to have success against Rumpel, they’ll have to convert rebounds chances into goals, when Rumpel allows the rare rebound. 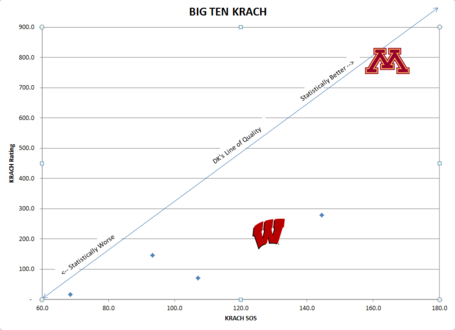 The KRACH ratings between the two teams predict that the Gophers should win almost 79% of games against the Badgers. Keep in mind, however, that KRACH does not take home-ice advantage into account when the ratings are calculated. There’s no doubt that the Badgers at home are very different than the Badgers on the road.

That impressive home record is likely skewed by the teams that have visited Madison so far this year: Northern Michigan, Lake Superior State, Penn State, Colorado College… I’ll stop this list when I get to a team that impresses me… Alabama-Huntsville, Alaska Anchorage, Michigan… Oh, there’s a good team! So, maybe the Badgers at home are the same as the Badgers on the road after all.

I’m not quite sure which Badger team is the real one. Either way, I think beating Wisconsin four times in one season is a tall order. I’m calling for a split, but I wouldn’t be surprised by a Gophers sweep. Let me rephrase, I will be pleasantly surprised when the Gophers sweep, but I’m predicting a split: Wisconsin 3-1, Minnesota 3-2.