What exactly are the Gophers getting with their 2014 class? How does it compare to previous crops Jerry Kill has brought to Minnesota? What are the themes and relative concerns?

Share All sharing options for: Minnesota Football Recruiting: Class of 2014 Review and Analysis

The latest crop of Golden Gophers are now signed and set to enroll this coming Summer. Today we take a look at what exactly Kill has brought in, exploring the overall themes, skills and concerns of the 2014 Minnesota signing class.

Among the many things you'll read about the class Jerry Kill inked yesterday was it represented his best recruiting haul to date, by almost any measure. Certainly from a class rating, average recruit rating or team rank scores, this was Minnesota's best signing day class since 2008.

But doesn't the signing of Jeff Jones, the highest rated player to ever sign with a NLI with Minnesota, skew the rankings higher? The visualization below certainly paints Jones as an outlier (2014 signees in maroon): 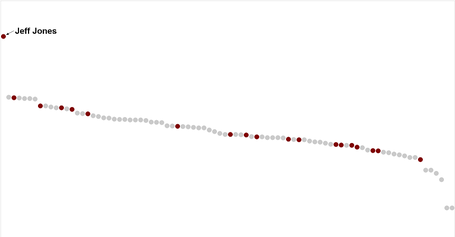 That's not to say that Jones is the only reason why the 2014 is rated higher than others.

The box plot to the right suggests that the upper quartile and whisker of the latest crop is stronger than any of Kill's previous classes. The highest rated recruits from 2014 group (excluding Jones) push the upper bounds of the distribution higher than previous years, highlighting a trend of the "best" of Kill's recruits getting better each season. The same could be said of the floor, which is also rising with each subsequent class.

Another aspect of the class to consider is the distribution isn't as tightly "packed" (or the inter-quartile range is wider) compared to 2013; the 2014 boxplot more closely resembles the 2012 class, the tails of the most recent signees aren't as long. Again, this is representative of the lower tail of the distribution getting better (i.e. the lowest rated recruits are better than previous years).

If you think of players at or above the upper quartile as your potential "impact players" relative to the rest of the class, then Kill's "impact" signees haven't immediately translated into results on the field. Names like Andre McDonald, Jamel Harbison, Philip Nelson, Steven Montgomery and Max Shortell as among those who fall into the upper tails in each season. On the other hand, several other recruits who fell into this category needed more time to develop and their best football may be ahead of them, such as Jonah Pirsig, Isaac Hayes, Berkley Edwards, De'Vondre Campbell and De'Niro Laster.

Another irony? Some of the most productive players during Kill's tenure were actually lower tail signees from the first two classes. Guys like Eric Murray, Theiren Cockran, Derrick Wells, Ben Lauer and Cedric Thompson were all among the lowest rated 8 recruits Kill has signed to date, and yet all are very productive starters.

The point? It's tough to quantity the impact of what better recruiting classes on paper will mean on the field. The classes are incrementally improving each season, though the payoff of said improvement may be down the road a bit.

Oh, and Jeff Jones is an extreme outlier compared to every other signee the last four years.

If there was any question about what style of offense the Gophers want to run and the type of team Kill wants to build in Dinkytown, those doubts were shattered yesterday. Coach wants a physical running game that utilizes multiple tight end and fullback formations, while similarly needing bigger, stronger defensive linemen to battle Big Ten offensive linemen.

The 2014 trench reinforcements continue a trend that Kill and Limegrover have established from the moment they arrived on campus.From a program building perspective, Matt Limegrover has knocked it out of the park with the cumulative effect of his last three OL recruiting classes. Just look at this list:

That's an incredibly strong crop of offensive linemen to build your program around, not to mention the other scholarship linemen Limegrover has signed and the burgeoning walk-on program that's produced two starters. Not only are they talented and peppered with helmet school offers, the linemen Kill and Limegrover have brought in are all massive. When Isaac Hayes is the runt of the litter at 6'3" and 300+, you know exactly what the strategy is: recruit tall OL with wide frames who can move their feet and bend -- proceed to watch them road grade all game.

To go along with the whole #MANBALL approach, one needs bigger bodied receivers with the size to go out and block for running backs in the boundary. The Gophers also needed playmakers at receiver who could stretch the field and win one-on-one battles in the passing games. Those type of wide outs - tall with excellent speed and hands - are very hard to land, since every other program in the country wants those kind of players too.

That's why grabbing Melvin Holland, Jr., Isaiah Gentry and Conner Krizancic was such a coup. All 3 fit the profile of exactly what the Gophers needed, but more importantly, they're very talented players who should immediately help the offense move forward. Combined with Donovahn Jones, Drew Wolitarsky and Maxx Williams, the latest crop of Minnesota receivers should pose match-up problems against smaller DBs in the Big Ten. It'll be up to Mitch Leidner now to get them the ball in a place where they can do something with it.

Related to skill sets, Elmore and Gibson are multi-faceted players who can fit different roles on offense depending upon the situation. Being "multiple" on offense requires more depth and breadth of talents, especially at the tight end spot. Craig James adds a needed element of speed, not only at corner, but in the return game. The coaches expect James to come in and compete right away on special teams. Jeff Jones and Rodney Smith are both patient zone runners who love running between the tackles and playing physical, so they're a perfect compliment to run behind Limegrover's wall.

Light in the Back Seven

Minnesota focused much of their attention this class towards offense and an additional four spots allocated for defensive linemen. That leaves just four total signees in the back seven, a strategy Kill attempted to spin during his press conference as by design. I'm not entirely convinced.

For starters, the staff only brought in one defensive back (James), though they would have ideally signed 1-2 more. They were stung by the de-commitment of Khari Blasingame late in the process, though they had their chances with other defensive back prospects who all chose to go elsewhere -- including some non-AQ schools. It does feel as though they weren't going to reach for a DB just to take an additional one this class with so many other pressing needs elsewhere. However, that brings the total number of defensive backs signed over the last two classes at a meager 3. Clearly, that position group will be among the biggest priorities for the class of 2015.

Similarly, recruitment of high school linebackers was a little curious. They landed Everett Williams early in the cycle and shifted their focus to pursuing JUCO backers. They didn't re-engage their interest in signing a second high school linebacker until late, by which time they had already allowed Indiana to build a stronger relationship with their top LB prospect, Tegray Scales.

More than anything else, this class brings all of Kill's recruiting efforts at Minnesota together and finally establishes the type of depth needed to field a successful Big Ten team. There are no longer positions with glaring holes on the depth chart or spots where the program will be hurting after the next wave of seniors graduate. There is a depth and breadth of skills at offensive line, running back, wide receiver/tight end, defensive line, linebacker and in the secondary. About the only spot where the Gophers aren't particularly deep or experienced is quarterback, and the coaching staff didn't seem at all concerned about that position on Signing Day.

Kill mentioned it repeatedly throughout the year and reiterated it yesterday, but the third full recruiting class is the one that "turns the tide" for the program. From a depth perspective, he's absolutely right. At the skill positions, the Gophers are still relatively young but talented. They should continue to grow and develop together, and the recent signees will improve the overall roster competition and make everyone better by pressuring folks to step up their game.