Minnesota Hockey: Gophers Lose More Than One Game To Badgers On Thursday Night

Welcome to the suck that shouldn't suck but does suck.

Share All sharing options for: Minnesota Hockey: Gophers Lose More Than One Game To Badgers On Thursday Night

UPDATE: Hey, so you know what I didn't put into this post last night thanks to frustration? A score. Because I'm a moron. The Gophers lost 2-1. Go away Joel Rumpel, no one likes you.

Ok, so let's get this out of the way first. I voted for a split on today's hockey preview. I didn't expect the Gophers to sweep this series. I am still cranky. Watching the Gophers lose to the Badgers will do that to a guy. This will be a quick recap, bullet point style (as is my custom).

- The Gophers outplayed Wisconsin. Wait a minute, that's a good thing right? Well...no. Several Badger players are currently on the podium admitting they didn't think they played that well. Losing to a team the Gophers outplayed is definitely something I didn't like. For example, let's take a look at shots on goal:

If that weren't bad enough, let's look at the 3rd period:

- Shut out on the power play. The Gophers were 0-4 on the night. That's not to say they played poorly every time they had an extra man. Mike Reilly was right there with the pipe in the 2nd period and the chances were there. But the Gophers failed to convert. Meanwhile, Wisconsin cashed in on their one and only PP in the first. Sigh...

- Joel Rumpel. Stop being good. I don't like it.

- The Gophers aren't #1 in the Pairwise anymore.

With the loss, Minnesota has been overtaken in the Pairwise and RPI by BC. Gophers still have a win & tie over Eagles head-to-head.

- This is Minnesota's first Big Ten loss and their first loss in 14 games. Per the always wise Nate Wells, I learned that this is the U's longest unbeaten streak since 2006-2007. I don't like Wisconsin being responsible for either of these things.

- Plenty of shots in close. I currently have shots sheets for just the 1st and 2nd periods, but through 2 the Gophers had put up 37.5% of their shots (18/48) from close range in front of the net. They still had a few too many bombs from the outside (29% - 14/48), but 5 of them made it on goal instead of being part of a complete blockfest by the Wisconsin D.

- Kyle Rau's pickpocket move that led to the first goal. Quick TO in the Wisconsin end leading to a pretty Taylor Cammarata one timer. The goal happened so quick that it almost felt like he missed because it took a second for the Wisconsin fans to start groaning.

- Making fun of the empty airplane hanger that is the Kohl Center. Seriously, if it weren't for the (unoriginal but loud and coherent) student section, the place would feel horribly dead.

- This loss really shouldn't hurt...but it does. I mean, look above. The Gophers have been on their best win streak in 7 seasons, they are still well atop the table in the B1G, and the drop in the Pairwise is something they can easily get back. But the fact that the loss that created all of this was to Wisconsin (in a game where the Gophers played the better game)...ARGLE BARGLE. And I say this having predicted a split.

- Thursday/Friday hockey is weird. That said, it is better than Sunday/Monday hockey.

- No postgame interview stuff tonight. I managed to take the wrong route to Don and the boys and missed my chance. I promise to do better tomorrow.

- Enjoy some photos. Galaxy S4 for the win. 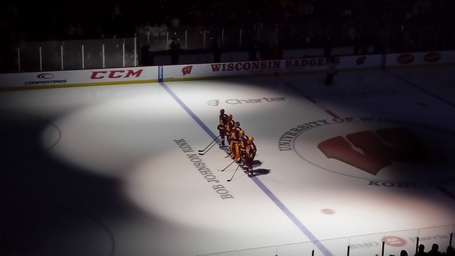 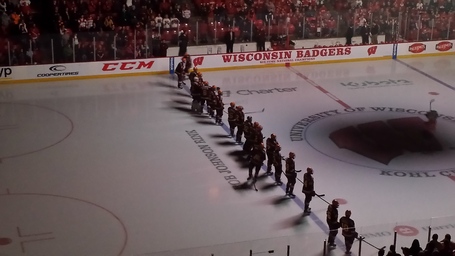 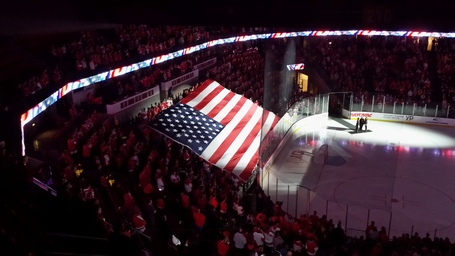