The sweep is the first the Gophers have suffered since 2 years ago in Denver.

Well then. Another 2-1 loss to the always hated Badgers. Why not?

This game was similar to last night's loss in more than just the score. While the Gophers didn't dominate shots on goal and the momentum felt more even, Joel Rumpel stymied the Gophers throughout the night and small mistakes continued to hurt Minnesota's ability to pull out a victory. Time to go to the quick and random thoughts.

It pains me to say it, but that was some outstanding goaltending by the Badger netminder over the past 2 nights. The Gophers didn't test him as much as they probably wanted to, but when they did Rumpel was up to the challenge. Ok, now let us never speak of this painful compliment ever again. In fact, let's get back to not liking Rumpel.

Rumpel continues to be good. I don't like good Rumpel. Go away good Rumpel, you are not wanted here. #Gophers

A Cleaning That Was A Long Time Coming

Let's talk about this sweep. Not only was it the first one in nearly two full years (last one was Feb 10-11 of 2012 against Denver in Denver), but it was the first sweep the Gophers had taken in Madison in a long time. How long? Well, I wasn't completely sure, so I asked the always excellent Nate Wells (@gopherstate):

That's...ok, this weekend has moved into very frustrating territory now.

Bombs Away (Sort Of) And A Late Flurry

The Gophers didn't completely regress on the shooting style, but the % of shots that were powered in from above the circles did increase to 43% (27/63). However, nearly 50% of those (13) made it on net. After struggling to put the puck on net much in the 1st (9 of 20) and especially in the 2nd (6 of 22), the Gophers poured it on in the 3rd period by putting 14 of their 21 shots on goal. Unfortunately that was too little too late.

Argh, we're back too passing too much #Gophers. 45 sec in without a SOG.

The Gophers still need to work on getting the puck on net (preferably from in closer) instead of always looking to set up the pretty one timer. Their only goal tonight was a great example of what can happen when you put bodies up front and get the puck on net. Two bodies in front and Ambroz knocked it home. Speaking of Seth...

I Don't Think Ambroz Likes The Badgers You Guys

Seth Ambroz now has 6 goals in the last 5+ games against Wisconsin. 5 this season. #gophers

Ambroz's 12th of the year from Kloos and Marshall -- Ambroz now with seven career goals against Wisconsin!

ICYMI, the hit that got McCabe tossed. #Gophers RT @GoAUpher: Video of the Rau hit (h/t to @GoodenDimz). http://t.co/RFtbrCWPEW

Will this sweep be a wakeup call for the Gophers? I honestly don't know. But it'd be nice if it was and the Pride On Ice came out flying against Michigan and rolled their way through the rest of the regular season though wouldn't it? While he didn't use the words "wake up call" to describe the situation, you'll see in the postgame videos that Coach Lucia clearly views this as a good teaching series for his young team.

The Obligatory Something Good

The Gopher student section sent a busload of loud fans. How loud?

Love the "Let's Go Gophers" chant we could hear on TV there! @GoAUpher @yorka1982

We had a blast at the game, nevermind the score. We had a great group of people on #RoadTrip2014 #SkiUMah #GoGophers pic.twitter.com/UtOa4CeHMQ

Please ignore the issues I was having with my phone during The Don's Q&A. Yes, I know it makes the whole Q&A disjointed. Apologies. 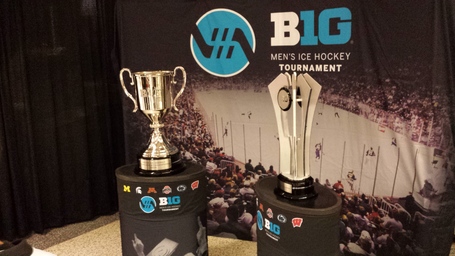 How long before we all get used to the site of these? 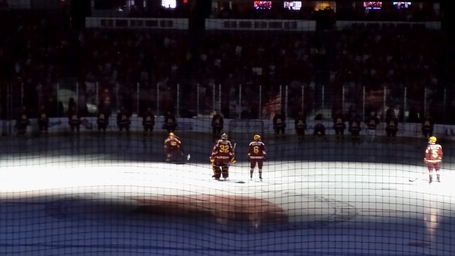 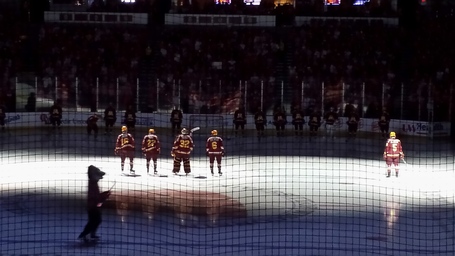 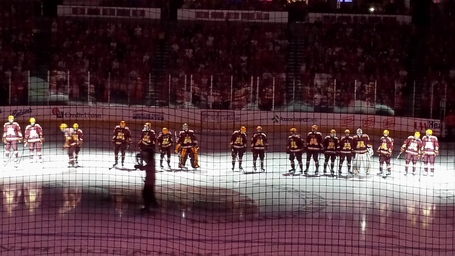 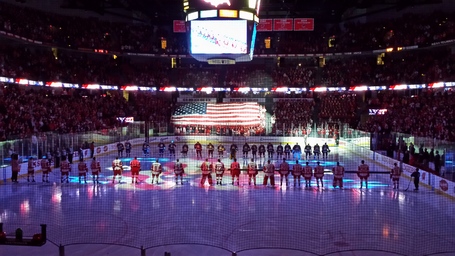