The Minnesota Women's Hockey Team got a hat trick from senior forward Kelly Terry in her last game ever at Ridder Arena to defeat Boston University 5-1 and advance to the 2014 NCAA Women's Frozen Four.

The Minnesota Women's Hockey Team got a hat trick from senior forward Kelly Terry in her last game ever at Ridder Arena to defeat Boston University 5-1 and advance to the 2014 NCAA Women's Frozen Four. The Gophers will go into the NCAA Semi-final on a 25-game unbeaten streak and will be looking to win two more games to achieve their third consecutive NCAA Championship.

The Gophers and Terriers played a back and forth battle early in the first period as both goalies, Kerrin S[perry for BU and Amanda Leveille for Minnesota made several impressive saves to keep the game scoreless.  The Gophers got on the board first when Terry took the puck behind the BU net towards the end of her shift and looked to try and find her teammate Rachel Bona in front of the net.  Terry threw the puck at the net and the puck slid through the pads of Sperry and into the net to light the lamp.

Bu wasted no time in answering as they won the next face-off and stormed down into the Gopher end.  The puck ended up on the stick of senior Sarah Lefort who put her NCAA leading 32nd goal of the season past a sprawling Leveille to know the game at one goal each.

The Gophers had a bit of a scare late in the period when senior defenseman Baylee Gillanders blocked a shot off her lower leg and lay sprawled on the ice for a few moments.  She would get off to the Minnesota bench gingerly after a few seconds and would miss a shift or two, but that would be it.  Junior defenseman Rachel Ramsey, Gillanders' d-partner was asked about it in the post-game press conference, and said that that is who Gillanders is as a player.  In her last game at home, there was no way she was leaving the game for any longer then she had to.

The Gophers had a flurry of chances in the last two minutes of the period, but Hannah Brandt t hit the crossbar with her shot, and Sarah Davis was stopped by Sperry on a breakaway.  The period ended in a 1-1 tie

Both teams has chances early in the second period, but once again Sperry and Leveille were up to the charge.  Minnesota would break the stalemate on the powerplay as BU got whistled for two penalties in 21 seconds, giving the Gophers a minute and thirty-nine seconds of 5x3 powerplay.  The Gophers would use over a minute of the 5x3 advantage, but Ramsey would get the puck in-between the circles and rip a beautiful wrist shot in-between bodies in front of the net and past Sperry to put the Gophers ahead 2-1.  Milica McMillan would get her second assist of the night on that goal, and Terry would also get an assist giving her two points on the evening at that point.  Of course she had much more to come.

The Terriers took advantage of finding some holes in the Minnesota defense later in the second period and got several odd-man rushes.  Leveille was up to the task however as she made several impressive saves including one sprawled out of the side of the crease that she stopped with the paddle of her goal stick.  She bent, but would not break and the teams went to the second intermission with the Gophers handing on to their 2-1 lead.

Gopher Coach Brad Frost knows his team plays the best when the games get to crunch time, and once again they showed it.  Minnesota controlled play early in the third period, and when Terry took a pass from Ramsey at the top of the left circle and slipped a beautiful wrist shot past Sperry to put the Gophers up 3-1, you could feel the weight lifted off of the Gopher's shoulders.  Minnesota continued to control play, and when another Ramsey pass sprung Terry all alone in front of the BU net, she did not waiver putting a backhand over Sperry's shoulder and sending the hats flying onto the ice at Ridder.  Terry has a knack for scoring big goals as she was the one who scored the triple overtime winner against North Dakota in the 2013 NCAA Quarterfinals at Ridder.  These three goals were much less stressful, but just as impactful.

The Gophers finished off their scoring spree in the third when Maryanne Menefee took a pass from Brandt and broke free putting the puck into the net and icing the game 5-1.  BU never really put up a fight in the last eight minutes of the game and the Gophers cruised into the Frozen Four.

The Gophers controlled the game from start to finish.  The Gophers won the shots-on-goal battle 46-29, the face-off battle 30-26, and went 1-5 on the powerplay compared to BU's 0-4.

A picture of the Gopher's celebration at center ice is below. 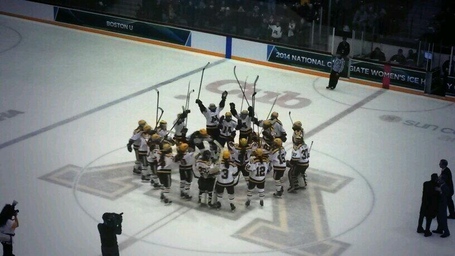 Besides Kelly Terry, Sarah Davis, Bethany Brausen, and Baylee Gillanders all played their last career game at Ridder Arena.  The senior class will finish with an absolutely astounding 71-6-4 record at home. Impressive by any count.

Brad Frost, Terry and Ramsey all met the media after the game, and their comments, except for a few ones near the beginning that this amateur videographer missed are in the videos below.  Terry talks about how they controlled the game, and how Coach Frost kept their team on an even keel looking to the future rather than the past on their trip to Washington DC this past week.  Frost answers several questions about BU, and answers one question on how they will look to get ready for either Wisconsin or Harvard for next weekend.

The Gophers have advanced to the NCAA Women's Frozen Four were they will take on WCHA foe Wisconsin (who defeated Harvard 2-1 in Madison this evening).  The Gophers and Badgers will play in one semi-final on Friday (the fifth time the two teams will face each other this season) with Mercyhurst who upset #2 Cornell 3-2 Saturday playing #3 Clarkson in the other semi-final.  The winners will advance to the NCAA Championship game to be played Sunday March 23 at 2:00 PM

Look for complete coverage of the Women's Frozen Four here on The Daily Gopher.  A Frozen Four Preview will be up Thursday or Friday and live game threads and game recaps will be posted throughout the weekend as the Gophers attempt to GoFor#3!