Robert Morris University is located in Pittsburg, Pennsylvania. Its namesake was an English-born merchant who helped finance the American Revolution who signed the Declaration of Independence, the Articles of Confederation, and the United States Constitution.

One would think that an appropriate mascot might be a Rebel (I vote for the Admiral Ackbar idea Ole Miss was floating a few years ago), or even a Colonist, because it’s a noun. One would be wrong, as they are the RMU Colonials (a pluralized adjective).

The Colonials earned the Atlantic Hockey Association’s automatic bid by defeating Canisius 7-4 in the AHA tournament championship. This was RMU’s first AHA tournament title and also their first birth in the NCAA tournament. According to their website, RMU has been playing D-1 hockey for ten years, but it’s unclear if their athletic department understands fundamental differences between hockey and figure skating. 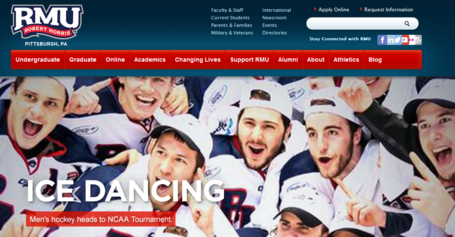 On to the real stuff we go. Robert Morris finished fifth in the AHA, and had an overall record of 19-17-5. Their KRACH rating is 36.1. The Golden Gophers, RMU’s first-round opponent, have a rating of 493.1. The Colonials have an uphill, dare I say "Bunker Hill-esque," battle to move on this tournament. If they have success, it will be on the strength of their offense.

The Colonials score an impressive 3.5 goals per game. Minnesota averages 3.4 GPG. Impressed? Don’t be. RMU played in the weakest conference in the country, by far, and also played one of the weakest non-conference schedules imaginable. Only three teams have played schedules worse than RMU: Army, Sacred Heart, and American International. The peaches in that bowl are a bit bruised.

This team features a scorer with thirty goals and 22 assists, junior forward Cody Wydo. Sophomore Jack Lynch has 27 markers, and junior Scott Jacklin has 21. The roster contains nine skaters with 20 or more points, which is sort of impressive despite the lack of quality opponents. However, it’s safe to say that RMU hasn’t played a team as good defensively as Minnesota, what with arguably the best goaltender in the country and team goals against average of 2.03.

The Colonials allow 3.0 goals against per game, again with the qualification that their schedule was terrible. The best team on RMU’s schedule is arguably Ohio State, which scored nine goals in two games. The primary goaltender is sophomore Terry Shafer, who has a respectable .911 save percentage, but a somewhat painful 3.02 goals against average. Suffice to say that he’s seen a lot of shots this season (over 34 per game).

RMU is a classic "high aspirations, low expectations" team in this tournament. After finishing fifth in their conference, no one really expected them to win the conference tournament. They’re playing with house money, nothing to lose, and would love nothing better than to slay the giant. There’s your Clay Matvick drinking game for the weekend. Queensbury rules: one shot/beverage per cliché; cheaters are publicly humiliated.