So...Saturday could be a bit busy.

UPDATE: THE TDG TAILGATE IS HAPPENING IN THE MAROON LOT.

It's been a little over a month since we announced plans for a TDG Tailgate to follow tomorrow's Goldy's Run and lead us into the Football Spring Game. I'm here to announce the "final" plans, or at least sketch out the best plan I can pull together for the event.

If you're going to be at Goldy's, look for the 6'9" guy wearing Zubaz. If it's not me then corral that individual and find the other 6'9" dude wearing Zubaz because I want to meet my long lost Zubaz brother.  I'll be walking (yes, I'm out of shape...deal) the 5K so I'll be hanging near the back of the 5K pack at the start line.

D516K and GN will be running but they will not have identifying pants to my knowledge.

Anyone who has been to Goldy's Run can tell you that parking fills up pretty quick. That's going to make the tailgate a little trickier to execute. Here's the best plan we've come up with. 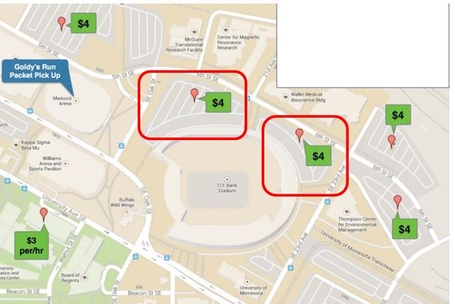 I will tweet out a picture and spot on the map to where I am on both the @GoAUpher and @TheDailyGopher accounts. If you are running, plan on tailgating, and arrive early enough try to park near me.

Approx 9:00 AM: Once the race is finished up I will head back to my car and write a quick post here on TDG that details exactly where I am in the lot. It will include pictures and detailed location and whatnot. All the info will go out again on the Twitter accounts.

9:00-10:30 AM: The rest of the TDG crew who can attend the tailgate will get their cars moved as close to me as possible. Should be relatively easy as the lots usually clear out pretty quickly once folks finish running. If you are not in the same lot as me but would prefer to be closer then I would urge you to do the same.

10:30 AM: TDG Tailgate starts. This is going to be really informal. If you aren't able to get closer to us with a car but can walk over from your spot then definitely BYOB and food. We'll have a basic setup in place with a grill that we can share until the gas runs low. Sorry, I'm in the midst of a move, finishing up my job in Madison, and hunting for a new job all at the same time. Simple is what works.

Again, if you're able to park close that will be best as it will allow for more room to hang out and it means you have pull a cooler and grill right out of your car.

The tailgate will run until there's no one left. I assume that will be about the time the Spring Game starts.

Come fall I'll tailgate in any type of weather Minnesota can throw at me. This spring, with too much going on and this trip designed to be a semi-relaxing last run up to Minny for a while, that's not happening. So, if it's raining and crappy (or about to be raining and crappy) the backup plan is to head to Stub & Herbs. That decision will be made by 10:30 AM. Stubs doesn't open until 11am, so we've got time to gauge how things are looking. If plans change I'll make sure to keep everyone apprised on Twitter and via updates to the post of TDG.

Regardless of where we're tailgating, here's the rundown of the Spring Game schedule:

2:00 PM: Football alumni sign autographs on the West Plaza and the current team takes the field for warmups.

There is absolutely no official plan for watching the game as a group, but I would really like to catch it somewhere on campus. If you are interested and have suggestions put them in the comments. If we choose Dinkytown I'm parking far away.

This is all a little more thrown together then I would have liked, but that's how it goes sometimes. Ultimately these are events I'm going to no matter what and I'm just hoping to get the chance to hang out with some of the folks from the TDG community if I can. So if you're thinking about coming to the Spring Game I urge you to stop on by the tailgate and chill for a bit!  =)

Thoughts On Watching The Natty?