The Gophers had a successful weekend in many sports...just mainly the non-revenue generating ones.

It was a good weekend for the Gophers on the field, track, and course, but lets start with some major revenue sports news first:

Marcus Fuller had a nice interview with Richard Pitino in Sunday's St. Paul Pioneer Press. Pitino talks about player development, his goals for the program, his potential flirtation with leaving, and playing his dad next fall.

As it gets later and later into the off-season, it appears more and more likely that all of the potential Gopher Hockey flight risks may be staying in school for next season.  If that happens, the Gophers will be a MAJOR favorite to win the National Championship that they got quite close to this season.

Gopher Hockey alums are having a good season as well.  The Gopher athletic department highlights the two Gophers, Thomas Vanek and Nick Leddy still playing for a chance to win the Stanley Cup.

The Gopher Hockey Twitter feed also had pictures of two Gophers getting their diplomas in now-graduated goalie Mike Shibrowski, and former Gopher and NHLer Nick Bjugstad who actually finished his degree DURING the NHL season to graduate this spring.  Congrats to both!

Congrats to @shibby_01 on graduating from the University of Minnesota! We are #UMNProud #CEHD2014 pic.twitter.com/InxZb6ccbO

***EDIT***  Apparently Carlson didn't graduate until today, so we add a tweet and congrats to Gopher Captain Nate Condon as well!

ESPN is doing a four part series on Big Ten revenues and expenses.  The numbers are not great for Minnesota.  In the available information reviewed from 2007-08 to 2012-13, the Gophers were 11th out of 13 teams in the Big Ten in total profit with approximately $6.8 million.  The lone schools to have less profit then Minnesota are Big Ten newcomers Rutgers and Maryland.  Northwestern as a private school does not have to release its financial information, hense why only 13 teams are discussed.   The Gophers profit of $6.8 Million is a drop in the bucket compared to Big Ten leader Michigan who had a whopping $90.2 Million profit over the same time period.

Our rivals to the east are also making strides in recent seasons.  From the linked article above, "In 2012-13, Wisconsin was No. 2 nationally among public schools in both revenue generated ($149 million) and expenses ($146.7 million).The money, of course, comes from more than simple ticket sales or conference payouts for bowl games and NCAA tournaments. Wisconsin's big financial windfall last year was thanks in large part to nearly $59 million in contributions and donations, more than $10 million clear of anyone else nationally. It's a big reason why the Badgers' one-year revenue increased by more than $45 million from 2011-12 to 2012-13, from 11th nationally to second nationally. Their surplus, however, was just $2.48 million, more than a $1 million less than the $3.78 million they made in 2010, with much less revenue ($96 million)."

That just shows how important Norwood and Nanne getting lots of $$ out of donors will be to the Gopher program as a whole.

As I wrote about last night the Gopher Softball team won the Minneapolis Regional in dramatic fashion on Sunday. They needed the extra game to get past Auburn and advance to the first Super Regional in the school's history.  Their task will not be easy as they will now travel to Eugene, Oregon to face the #1 seeded Oregon Ducks in a best of three game series beginning next Saturday night.

The Gopher baseball team took one game of a three game series from Big Ten Regular Season Champion Indiana in Bloomington this past weekend.  The Gophers have qualified for the Big Ten Baseball Tournament this week in Omaha where the #4 seeded Gophers will play #5 Michigan at 9 PM Wednesday night.  The entire tournament will be aired on the BTN, and we will have a full Big Ten Baseball Tournament Preview on Wednesday here on The Daily Gopher.

The Gopher Men's Golf team ended their season at the NCAA Raleigh Regional this past weekend. The Gophers finished in ninth place as a team, and only the top six teams advanced to the NCAA Championship Tournament.  Big Ten Freshman of the Year Jose Mendez also finished in nith place individually.

The Gophers will have one individual and one doubles team participating in the NCAA Tennis Championships this week in Athens, Georgia.  Gopher junior Leandro Toledo is ranked No. 38 in the latest national singles rankings, has a 23-9 overall record in 2013-14 with an 18-6 mark—playing all 24 of Minnesota’s dual matches at the No. 1 position—in the spring. Toledo was one of four unanimous First Team All-Big Ten selections, going 8-3 in conference play with a 7-3 ledgers against ranked opponents.

The junior doubles team of Jack Hamburg and Mathieu Froment are an alternate into the doubles portion of the tournament.  They went  24-5 with a 13-3 spring record.

Both the Gopher men and women competed in the Big Ten Championships this past weekend.

The Gopher men finished in 10th place as a team, but got individual Championships from Zach Siegmeier in the pole vault and Trevor Yedoni in the long jump. It was the third Big Ten straight title for Siegmeier who cleared 5.45 meters (17' 10.5") for the win.  Yedoni won his first Big Ten Championship with a jump of 7.57 meters (24.10 ft.) on his final jump of the competition.

In what has made GoAUpher very very happy on twitter, the Detroit Tigers finished a three-game series in Boston against the Red Sox yesterday, and then left for the airport.  They got stuck at the airport, but they looked um....flashy?  Expect several Zubaz4Lyfe posts in the comments from him....

The @tigers got stuck in Boston, but they sure looked good: http://t.co/jDhE2VKVZN pic.twitter.com/5mQ2htQir5 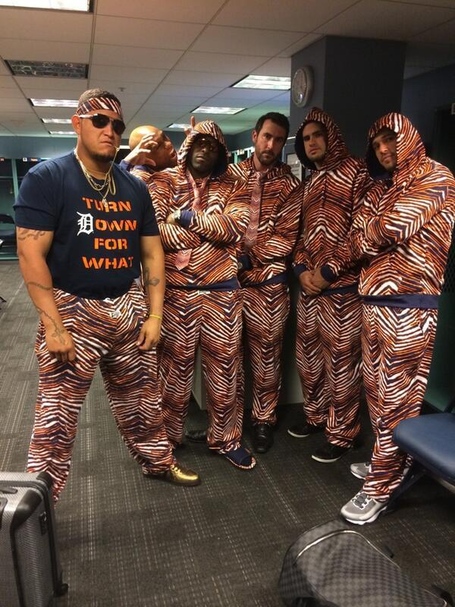