The Gophers will attempt to get back to the NCAA Championship Game, but win it this time!

The Minnesota Athletic Department released the 2014-15 Gopher Hockey schedule Thursday morning.  They Gophers will play a mix of in-state rivals, additional quality non-conference teams, and Big Ten opponents in its 36-game regular season schedule.The Gophers will be looking to defend their Big Ten Regular Season Championship, and build in a season which took them all they way to the NCAA Championship game before falling to Union.

The Big Ten portion of the schedule is once again a bit different from the traditional Friday and Saturday night that most college hockey fans were used to.  However, one portion of good news is that there will not be any Monday-Wednesday games this year after the Gophers and Penn State played on a Monday night last season.  The bad news for Gopher fans is that after not having a single non-Friday, Saturday or Sunday game at Mariucci Arena last season, its looking more and more like the Gophers will host at least one Thursday night home game this season.  There is also only one weekend where there will be conflict between the Gopher Football and Gopher Hockey schedules in that both teams will be home the same weekend.  That date is Saturday November 7th, when the football team plays host to Iowa, the hockey team is currently set to host the second game of a two-game series against Notre Dame that Saturday.  That game will most likely either be a later 8PM face-off if the football game is an 11 AM kickoff, or will be moved to Sunday afternoon if the football game will kick-off at 2:30.  Unfortunately, like the UMD game that was moved to Sunday last season, its not likely that we will know until the Big Ten announced the football kick off time either one to two weeks prior to the game.

So we shall go weekend by weekend breaking down the schedule below.  As always, times and TV will be announced nearer the beginning of the season, but like last year expect a few interesting face-off times for Big Ten games.  If a Big Ten game is Friday night, assume it will be an 8:00 PM face-off if either in Minneapolis or Madison, and most likely a 5:30 face-off if in the Eastern time-zone.  You will also see several games are just listed as weekends and not specific days.  Several games could be moved to either Thursday or Sunday, and those final dates will also be announced lat a later dates.  Additionally, a probably exhibition game against a Canadian College team like the Gophers have played the last several years will most likely be added to the beginning of the schedule at a later date.  So with further ado, here is the 2014-15 Gopher Hockey Schedule

The Gophers won the Icebreaker classic last season at Mariucci Arena, and will play in the season opening tournament for the second year in a row.  The Gophers will see a lot of familiar teams in this tournament unfortunately, as Minnesota is guaranteed to play UMD at least two more and potentially three more times this season, and will also host Notre Dame for a series in November.

The Gophers will hang their Big Ten Championship Banner two weekends later in their first home series against the Beavers.  The Gophers swept a series in Bemidji last season.

The Gophers and Huskies will play a home and home series that weekend in a rematch of the NCAA Western Regional Final with one game in Minneapolis and the other in St Cloud.  The official schedule lists both games as TBD, however a rumored St Cloud State schedule lists the Huskies as being home Friday and the Gophers as hosting on Saturday night.

The Fighting Irish come to Mariucci for a series after the Gophers went to South Bend and split a pair of games last season.  Mario Lucia gets to play in front of his dad for two more games, and in front of the Wild brass who drafted him.  As a reminder, the Saturday game may be moved to Sunday depending on the kick-off time of the Battle for Floyd.

The Gopher play the second of their home and home series against in-state schools.  The Gophers will have already seem the Bulldogs once in the Ice Breaker Classic, and may see them again in the North State Classic in January.

The Gophers get their big non-conference road trip over Thanksgiving weekend when they go to Boston for one game against fellow Frozen Four team BC, and one at Northeastern.  The Gophers hosted BC for a very memorable series at Mariucci last season, and will host Northeastern in the 2015-16 season before playing these two teams in Boston again in 2016-17.

The Gophers kick off the second season of the Big Ten Hockey Conference in East Lansing in their last games of 2014.

The Gophers will host the 24th annual Mariucci Classic against a field of Hockey East, Atlantic Hockey and ECAC teams.   Mass-Lowell has been one of the best teams in the nation the last few seasons, and thus I would expect the Gophers would attempt to set up a Minnesota/ UML championship game.  My prediction is that MN will play Merrimack on Friday while UML and RIT play in the other semi-final. The Gophers also will be missing any of their players who are playing for the USA Junior Team who  have their annual World Championship Tournament during that time in Toronto.

The Gophers will head to Ann Arbor much earlier then the last week of the season this year.  One game will be Friday night for sure, but the other game may be either Thursday or Saturday night to be determined at a later date.

The Badgers make their annual trip to Mariucci Arena to open the Big Ten home season for the Gophers for the second year in a row.  Just like the Michigan series, one game will be for sure Friday night, while the other will either be Thursday or Saturday.

The Gophers will play with three other Minnesota school sin the second annual North Statr Hockey Classic at the Xcel Energy Center.  The Gophers won both games last season to win the first tournament.  The Gophers will play MSU-Mankato Friday night in the only game between the two schools, and will either play UMD for the fourth time, or Bemidji State for the third time on Saturday.

The Gophers make the return trip to Madison two weeks after the Badgers were here.  This could be a fun series for the potential bad blood that may build up two weeks earlier and won;t have time to dissipate prior to this series.  The Gophers played a Thursday/Friday series in Madison last year getting swept by the Badgers.

The Buckeyes come to town with both games being played indoors this time.  Once again, one game will be for sure Friday night with the other either Thursday or Saturday.

For the second year in a row Michigan gets to spend Valentine's Day weekend in Minneapolis.  Unfortunately we don't know what nights that will be yet as this is where things start getting fun.  The Gophers and Wolverines will either play game one on Thursday, Friday or Saturday, with the second game being Friday, Saturday or Sunday.  Oy.. 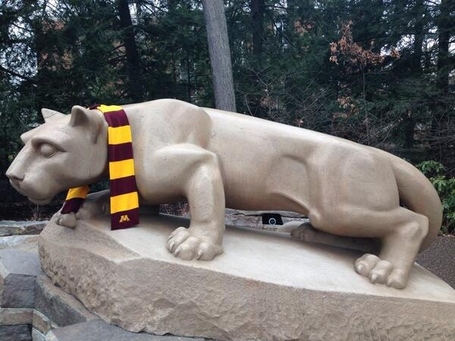 The Spartans make the return trip to Minneapolis in another series that will be played at some point that weekend between Thursday and Sunday.

Well what do you know, a series still scheduled for Friday and Saturday!

The Gophers will celebrate Senior Night and hopefully a second consecutive Big Ten Championship at home against the Nittany Lions the last weekend of the regular season.  It will most likely be your last time to see Adam Wilcox, Brady Skeji,  Kyle Rau and Mike Reilly on the Mariucci Ice.

The Big Ten Tournament rotates from the X in St. Paul to the Joe in Detroit.  You thought it was empty here last season, just wait for this....

Barring a collapse of epic proportions, the Gophers will be in one of these four cities next spring.  Which one is as good as guess as any.

Yep its on the schedule.  We will be there.