We review the SB Nation NFL blogs to see where they think Ra'Shede Hageman will be drafted. Also, PIE CHART!

In case you've been living under a rock and forgotten, tonight is the 1st Round of the NFL Draft. And for the first time in...well...forever, Gophers fans have a reason to watch that is based upon the University of Minnesota's football team. That's right, Ra'Shede Hageman is viewed as a potential first round draft pick. I thought I'd peruse the SBN interwebs and see what all of the NFL team sites and the Mothership had to say about Shede's potential big night. The result is the the big table you'll see just a little ways down the page.

- Just over half the SBN NFL team blogs did not do full Mock Drafts (don't blame them as I assume they take forever to do). Many focused only on who they thought their team would select in each round. I ignored team specific mocks unless they included Shede.

- I only looked back through the the last week or so for any site's mocks because 1) consistency and 2) I only have so much time in the day.

- Some SBN NFL team blogs did only a 1st round Mock Draft, others did 3 to 7 round mocks. That's why you'll sometimes see notes about Shede not being selected in the first round. 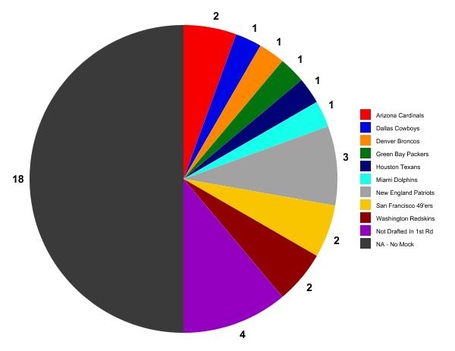 - Only one blog saw Shede going earlier than 20th.

- FOR THE LOVE OF JOBU PLEASE DO NOT PICK HIM GREEN BAY! I seriously hate the idea of a player I like from the U ending up with the Packers. Plus if the potential he has flourishes like I hope it will, that's just bad news for the Vikings.

- My guess is that he ends up in New England or Washington.

- I just want him to get drafted in round 1. Great for him and great for the program.