NFL Draft 2014: Potentionally Big Day For Gophers Hageman and Vereen In Rounds 2 and 3

Hageman seems to be a lock to go early in Round 2. Can Brock make it a Golden Gopher Friday by getting selected in Round 3?

Share All sharing options for: NFL Draft 2014: Potentionally Big Day For Gophers Hageman and Vereen In Rounds 2 and 3

Bummed for Shede, but just wasn't the right kind of draft to make it happen. He'll go quick tomorrow.

Shede Did Not Eat A Guy In The First Round

Well, it wasn't to be. Ra'Shede Hageman had the chance to be the first Gopher player drafted in the 1st Round since Lawrence Maroney in 2006. Today just wasn't the day. The draft took a different path than many expected and by the time Darquez Denard was still on the board for Cincinnati to select at #24, you had a pretty good sense that it wasn't going to be Shede's night.

We shouldn't have to wait too long to get excited to the powerful Gopher DT though. A quick Google search looking for the best players available after Round 1 shows Hageman sitting pretty (both SB Nation and CNNSI have him in their Top 5 left for example). I fully expect that we'll see his name called in the first 15 picks tomorrow. Prior to tonight I would have bet pretty hard on Washington at #34 (still looks pretty good) but now I could see him holding for a bit longer before going. Cowboys at #47 would be the farthest I would see him falling.

(Ha, look at me talking like I have a clue!)

Regardless of when he gets drafted or who he goes to you can count on one thing...this will be my reaction of excitement to the news. 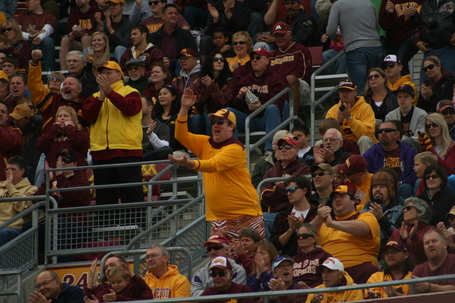 This is my "Shede Ate A Guy" reaction, courtesy of Gopher Nation.

But What About Brock?

Since I think we can all agree that Shede goes in Round 2, where does that put Brock Vereen? The analysis I posted certainly suggests that Round 3 is a possibility for Brock, but group think on a "combine surprise" player is a tough thing to trust. And let's not forget, conventional wisdom didn't have Cleveland pulling of a savvy set of moves or Johnny Football falling to #22 either. No matter what though, it would be a great story if Brock were to finish Friday already drafted. I know that's the outcome I'll be cheering for!