The Gophers play on the road 5 times this season? Where should/will you be traveling to see them play?

NOTE: Thanks to Gopher_Busch for the FanPost that inspired me to write this.

Road trips are one of my favorite parts of the college football season. I really enjoy experiencing another university's campus and city, eating and drinking at the area's iconic bars and restaurants, checking out their tailgate scene, and getting to see the Gophers play in a different stadium.  I try really hard to make at least one road trip a season. In many years, that has ended up being the game in Madison (not much of a road trip for a guy who was living there at the time). I've also made repeated trips to other locations like Iowa. Now that I live in the Cincy area, I'm excited because it will become easier to follow the Gophers to the campuses of the B1G East.

The 2014 season brings back the opportunity to make the trip to one of my favorite road trip locales, Lincoln, NE. It also includes a rivalry game in Madison and another trip to the Big House. It has a road trip to a newly renovated stadium at TCU. Oh, and Illinois. I'm going to rank each of the road trips according to which ones I think are the most desirable and why. It's totally subjective and I might change the criteria as I go because I already have the list in my head and dammit I'm going to justify it however I choose! I'll also note the road game I'm for sure going to and the one I might get to.

I'd love to read your rankings in the comments and please share any games you're going to travel to. It would be great to follow through on Gopher Busch's suggestion and set up some TDG get togethers for a couple of these roadies.

#1 - Nebraska: In my opinion this is without question THE road trip to make this season (if you want a reminder of why I think so, read my road trip recap from 2012). Lincoln is a fun town with a variety of great bars and restaurants in the Haymarket area near campus. The people are friendly (and supposedly will continue to be even though the Gophers beat Nebby last year) and I like the stadium a lot. The visitor's section is a bit of a pain to get into and you're pretty far away from the field, but it has a good atmosphere. The schedules aren't out yet, but I expect that there will be a basketball game of some sort at the new Pinnacle Bank Arena in Haymarket on Friday, which would be great because I'm excited to check out that arena (it looks amazing). Most of all, I'm excited to have some grilled wings at The Watering Hole and bourbon at the Single Barrel. In case it isn't clear yet, I'm definitely going to Nebby again this season.

#2 - TCU: This is the road trip I really wish I could make. I've wanted to see Amon G Carter Stadium ever since I first saw the renderings of the renovations they had planned. It looks like a neat campus and I've never been to the Dallas-Fort Worth area, so it's definitely a draw to me. The Rangers are in town that weekend, so a Friday night game at their ballpark is definitely an option. While the Cowboys aren't in town but there is a Texas game (vs. UCLA) at Jerry World on Saturday night. If you're in town early or staying late, a tour of Jerry World may also be possible. Sadly, this trip was not to be for me and I won't be headed to Texas this fall. 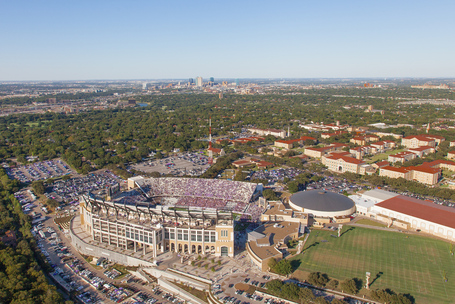 Tie #3 - Michigan: I haven't been to the Big House since the 2004 season. Also, the last time I was there I was staying with a friend in Lansing, so my time in Ann Arbor itself was limited. I didn't get to experience any of the atmosphere outside of a short time tailgating on the golf course and the stadium experience itself (10 rows off the field on the 10 yard like is a pretty good way to experience it though). I'd love to see the Big House now that it's been renovated and I'd like to actually experience Ann Arbor as a college town. I hear a lot of good things about the town in general and I will make it back to see if they are true. I'll be out in WA that weekend though, so my triumphant return to Michigan will have to wait for another year.

Tie #3 - Wisconsin: If I lived in Madison this would be #4 on its own because seriously, it didn't used to be a road trip. This ranking isn't because I think Madison is a bad road trip. In fact, I think it's a great place to visit and its proximity to the Twin Cities will make it a higher priority on many of your lists I'm sure. Plus, ya know, Border Battle! For me though my excitement for getting back to Madison to see friends, tailgate, and hit my favorite establishments is tempered by the fact that I know I can't go this year. It will be the first Gopher/Badger game I haven't attended in person since 2005. Then again...perhaps that's all the Gophers need to pull out a W! Why should this be higher on everyone else's list? Great food, great beer, close by.

#5 - Illinois: This will be short. I don't care for central IL. Nothing about my trips through Champaign-Urbana has excited me. I'll be trying hard to go to this game though. That doesn't make sense you say? Well, Champbana is only 4 hours away from me, it's a stadium I haven't been to yet (my goal is to visit every B1G stadium with the Gophers playing there), and it's an excuse to see some IL friends in Chicago over the weekend.

What road games will you be at?