ATTENTION: the following post is very, VERY critical to everyone's past and quite possibly to our futures as well.

Before you read any further, are you sitting down? No? Let me give you a second or two.

How about now? I'm not kidding you guys, for reals.

Ok good, because this is really important and I don't want you to fall and hurt yourself while you respond.

I need your help, because Big Ten Network is spreading lies.

This is unconscionable blasphemy! Next thing you know we're going to find out that Big Ten Network has installed bubblers in their new office building at that they only serve soda in the cafeteria.

This stops right now.There is a line, and BTN has crossed it. 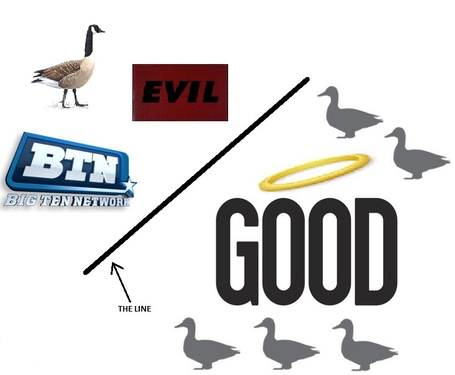 The proper name of the game is Duck, Duck, Gray Duck. Or Duck Duck Grey Duck. I don't care how you spell Gray/Grey, it means the same thing and is superior to Goose in the context of a game where you sit in a circle and chase other kids around.

By contrast, look at these three birds.

Wow. Those sure are three of the same kind of bird. One of them is gray, yes, and eventually you will pick that one out of the crowd. But it won’t be quite so easy. It’ll take a keener eye and a sharper ear.

Says Wikipedia: "‘Duck, Duck, Gray Duck’ is a variant played by children in Minnesota. This [version] adds a layer of listening skills to differentiate between ‘gray duck’ and ‘green duck’ as opposed to ‘duck’ and ‘goose’."

This is why "Duck, Duck, Gray Duck" requires a cleverer child: This version of the game allows for TRICKERY. For example: The person calling out duck colors can tap someone on the head and say "Purple duck, blue duck, GR-," and watch that person start to get up, and then finish "-EEN duck, haha," and laugh and laugh while that child sits back down again, humiliated. This is good character building.

DUCK, DUCK, GOOSE IS TOO EASY. THE SECOND YOU HEAR A G-SOUND YOU ARE UP AND RUNNING BECAUSE YOU KNOW THAT WORD IS GOING TO BE "GOOSE."

This makes it way, way too easy to win. Do you want your children feeling so easily self-satisfied? Proud? Confident in their ability to succeed not only in playground games, but in life itself?

There is a reason all the children in Lake Wobegon are above average. It's because they played games that challenged their minds. Games like Duck, Duck, Gray Duck.

The fine people of Minnesota see what you're up to BTN, and they don't like it.