I only have one major problem with the B1G Preseason Media Poll that was released on Friday.

Were you aware that the Big Ten stopped doing an official media poll a few years back? I'll be honest, I'd forgotten that fact (tells you how much I worry about media polls on the whole). It could also be because the folks at the Cleveland Plains Dealer have done a good job of running an informal poll since the Big Ten stopped doing the official version. In any case, the media poll is out and here are the results:

Ok, that's about what I'd expect. Except for one thing. Do you see it? Can you spot the issue?

Look, I like Pat Fitzgerald. I think he's done well for himself at Northwestern. I respect the work he and his evil baked potato did to ensure Iowa cried salty tears of unhappiness. I don't really have any issues with the team or the school. But they aren't going to finish in front of Minnesota this year. That's right, mark this prediction down. Northwestern will finish behind Minnesota in the standings. Why? I think Minnesota is better, I think they beat Northwestern head to head, and assorted other gut feelings not represented by statistics. With that in mind, I'd like to have Jerry Kill explain his feelings on the matter: 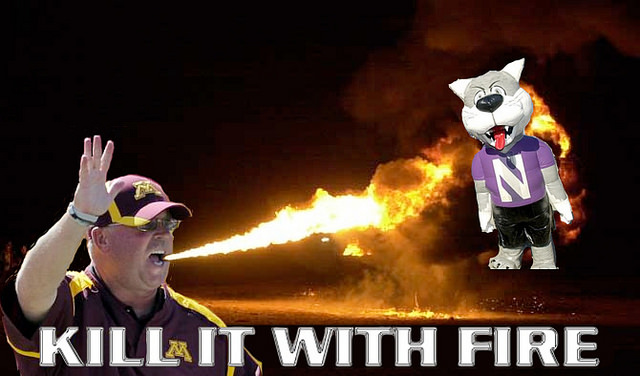 (hat tip to @LPWildcat for the 'Shop work)

- I would not be surprised to see Penn State (and even Maryland) finish ahead of Michigan. I'm not sold on Michigan. I think the Gophers would stand a much better shot at beating Michigan if the game weren't on the road again.

- Poor Indiana. You're going to fire another coach aren't you?

- The West is a crapshoot, but the easy schedules for Iowa and Wisconsin makes me pretty confident one of them will win it.

- Congrats Illinois, no one thinks you're the absolute worst!

What do you think?

Do these rankings look right to you?