We take a look back at two days of media circus.

As as quickly as they arrived, the Big Ten Media Days were gone. All in all I think we know that this whole event is relatively pointless. Rarely do you get any major news coming out of these two days, especially when your head coach is notorious for keeping an even keel at the microphone. That said, the Media Days are exciting because they are the unofficial signal that football is really and truly here! To help us wrap up and move forward, here's a recap of some of the highs and lows from the last two days as well as some #TAKES on what came out of the Hilton Downtown Chicago.

No, we didn't teleport a member of the writing staff over to Chicago for Day 2. However, through the magic of a national blog network with reporters on the scene (namely, the fearless leader of fellow SBN Northwestern blog Inside NU, Kevin Trahan (@k_trahan) we were able to get some of our questions asked. You'll be happy to know that Kevin was able to get a Golden-I question in. You'll be saddened to know that the response to it was...lackluster. In any case, HATS OFF to Kevin for helping us out and let's see what Coach had to say:

- We need to make Coach more aware of the Golden-I. Clearly that's the most important thing for him to be focusing on.

The Jeff Jones News Through A Different Lense

Elliot (aka PuckettWept) made an observation today that I think rings especially true given the responses given in the audio clip above:

Example of how bland Kill keeps it w/media: Reporter at #B1G media days asked him about his favorite play to run. Kill: "A successful one."

Considering how close to the chest Kill plays most things w/media, it's fairly telling that he was confident Jones will be on campus.

This certainly has some logic to it. That doesn't mean Coach Kill will be right, but given the relative lack of news to come out of his Q&A's otherwise the level of shared regarding Jeff's situation is notable.

The Jeff Jones wasn't the bit of news that would count as notable. Joe C's afternoon blog update contained some other interesting nuggets:

* TE Maxx Williams (knee) is back to full speed. In fact, quarterback Mitch Leidner said Williams and fellow tight end Duke Anyanwu have posted running speeds as quick as anybody on the team, including the wide receivers and defensive backs. Scary.

* RB Donnell Kirkwood had surgery earlier this summer (not sure what the injury was) but is working his way back to full speed. "He hasn’t been the same, but he feels good now," Kill said.

* DB Briean Boddy-Calhoun is fully recovered from his ACL injury. He looked terrific by the end of spring practice.

* DB Derrick Wells (shoulder surgery) missed spring practice but is back to 100 percent. "He may be as healthy as he’s been," Kill said.

* WR Connor Krizancic has a hamstring injury. Kill said his status for the start of camp is uncertain.

* LB Cody Poock had surgery to repair a torn ACL in March, but believe it or not, Kill said the coaches are considering clearing him for practice. Kill said a decision will be made Thursday.

"If he can come in and do pass shell and non-contact, we’ll probably bring him in," Kill said. "Is he going to be guaranteed to be ready to be able to play by the Big Ten schedule? I don’t know. I know that’s his goal. But if we get into that thing, and he’s not 100 percent, we will not play him, because he can get another year [of eligibility]."

Jeff Jones Not Headed For JUCO?

Coach Kill seems confident the NCAA will let Jones come to the U.

Antonio Thompson - The Man, The Myth, The Legend

I can guarantee that you won't find this transcript anywhere else.

Jeff Jones Not Headed For JUCO? Antonio Thompson - The Man, The Myth, The Legend

* Kill said incoming freshmen tight ends Gaelin Elmore and Jerry Gibson are both candidates to play immediately at the H-back position. Mike Henry played there last year at 5-11, 230 pounds. Elmore is 6-6, 260 pounds, and Gibson is 6-3, 230. They’ll probably start out at tight end – Gibson actually might line up at wide receiver – but the Gophers will look for ways to get them on the field, too.

* The Gophers gave offensive lineman Jon Christenson some time off recently, hoping to get him in good shape for the start of fall camp. Christenson, a starting center last year who is coming off a broken leg injury, could move to guard.

* Kill injured an hamstring doing up-downs (a conditioning drill) about 10 days ago and is walking with a limp. But as for his epilepsy, things sound great.

"I trained hard in the offseason, too," he said. "I’ve done a lot of walking. I dropped about 12-13 pounds, quit drinking Coke and Diet Coke. I’m drinking water. All the things that can help bring on [seizure] situations, I’ve made sure I addressed."

Um...wow? Look, I love the optimism, but I'm honestly not expecting this to pan out into anything. Still, wow.

- Derrick Wells: No offense to Coach, but given how things have gone for Wells I'm hoping he's wrong about "he'll be as healthy as he has been." I'm hoping Derrick is significantly MORE healthy than he has been.

- Not sure if Joe C. felt the TE running speeds were "scary" because WOW FAST TIGHT ENDS THAT'S AWESOME or if he was more cynical like me and thought "OH CRAP YOU GUYS WHY AREN'T OUR WIDE RECEIVERS FASTER?"

- MOAR H-BACK. No reason, I've always liked that position for no reason of any value.

- And the Kill health question was handled the way it should have been. Straightforward and without fuss.

Who makes the best dressed list? Let's start with the Gophers:

All ready for round table interviews. pic.twitter.com/KiWRFrH7LI

First time in a suit yday. Now @MitchLeidner7 wearing a bow tie that he tied himself. Thanks to a handy YouTube video pic.twitter.com/n252EjgqYw

"I can't wait to get the season started & improve on last year's success." -RB David Cobb of @GopherFootball. pic.twitter.com/gy4nwB6Q0p

*That's* what a quarterback looks like. RT @umterps: CJ Brown, making a fashion statement at Day 2 of #B1GMediaDay. pic.twitter.com/H9JZjYK647

They're no Zubaz, but they'll do.

Nebraska's Kenny Bell is best dressed at B1G Media Days and it's not even close. pic.twitter.com/fchETf7Hew

And in case you were wondering, Bell has an amazing Twitter handle too: 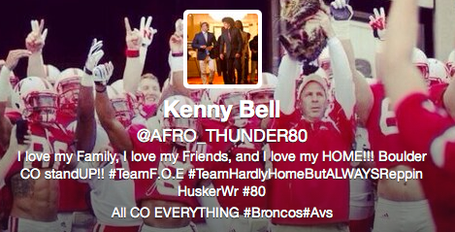 Other Assorted Things I Think I Thought I Might Be Thinking About, Possibly

- Thank you media for not beating Kill's health and epilepsy into the ground for no good reason. It wasn't even a topic of conversation on Monday ("storyline to watch for" my a**). It did come up today, but you'd expect it to get touched on in the more intimate Q&A session on Tuesday and as far as I could tell no one belabored it.

"When we say we want to be 12-0, we mean it," senior running back David Cobb said. "That’s not a joke. We’re not just tossing that around. We feel like anybody on our schedule we can beat, home or away."

Minnesota TB David Cobb on facing #Badgers this season. "We'll get the Axe."

Melvin Gordon seems to have noticed:

"I actually read up something on Minnesota (Monday)," Gordon said. "One of my teammates retweeted it, and we're talking how they're going to come down and cut down our goal post with the axe. It got me a little fired up. So I can tell you I'm definitely waiting for that game."

"We have a great defense waiting for him," Cobb said. "If you get a chance, let him know that."

As I saw somewhere on Twitter, this is the sort of thing that gets said every year so not really a thing. For my part, it's all part of the pageantry of Media Days, and I hope it never changes.

When Cedric Thompson showed up at the Gophers' new football players' lounge this summer, his jaw dropped at the sight of the breakfast spread available to the team.

"We had a tremendous amount of food," the senior safety said Monday. "There was a lot of fruit, a lot of muffins and protein shakes. There's a lot in there. There's no reason now that you can go without breakfast at all.

"It's great. It's something I wish we had all four years, but better late than never."

"For all the programs across the country, not just for us, it's great," said Gophers senior running back David Cobb, who with Thompson and quarterback Mitch Leidner represented Minnesota at Big Ten Media Days Monday at the Chicago Hilton.

"You don't have to balance your $100 (stipend) for the month trying to buy food, trying to buy clothes, trying to get gas," Cobb said. "That's a blessing; they're taking care of us."

I know some people scoff at the idea of the players not getting enough to eat and I certainly don't think every player struggled with it. The thing to keep in mind though is that for some players it's a matter of scale. I'm thinking specifically about players from very poor backgrounds (i.e. no outside cash on hand unless it was under the table) and players on high calorie diets. I can speak to the cost of the latter from personal experience. In high school I was on a 5,000-6,000 calorie per day diet to bulk up in the offseason and to MAINTAIN weight in season. You'd burn through that $100 stipend in a week fast if you were having to provide some of that food yourself, especially when it needs to be healthy.

In the meantime, let's see what that kind of diet looks like when properly administered:

Ever wonder what a year of college football and a 6000 cal a day diet will do to you here's a pic of @alex_mayes76 pic.twitter.com/jOPcRtLLAi

Although the Gophers football program isn't among the Big Ten's wealthiest, it will provide more than enough meals and snacks to its athletes, and even recently hired a full-time nutritionist.

"I think it's great for our kids, particularly in the summer (when) it's hard to monitor things," Gophers senior associate athletics director Dan O'Brien said. "That's when you see kids, we work with them all year long, suddenly for three months they have a bag of McDonald's in their hand or they're not eating at all.

Bolding in the above is mine because...um...we didn't have one of those before?

The Part Where I Say Thank You

Thanks to everyone for reading and commenting on all the B1G Media Day stories. I'm pretty proud of what we pulled together. We delivered more content than all but two SBN B1G Blogs, and both of those blogs had at least 2 people directly dedicated to coverage (we split it among multiple guys who also had Job A to deal with). Making that sort of thing happen is a lot easier when you're doing it for a great community, so keep being awesome!

What were the biggest Media Day stories in your mind?

Anything from Media Days have you more excited for the season?