An ode to football, fortune, traditions and beer. Minnesota season predictions and new methods of inference, mixed with the tried and true. Models and Bottles, 2014 vintage. Cheers.

We're back for another year of inferencin', prognosticatin' and drankin'. This is your only advance warning.

Also, for your listening pleasure:

Why would I subject you all to Carl Orff's O Fortuna in a post about statistical modeling? Translated lyrics about the vicious wheel of fate that keeps one oppressed? Yeah, can't relate to that as a Gopher fan AT ALL.

Last season's M&B efforts left me just a little unsatisfied. Everything was far too complicated, and the various models didn't relate in ways that made sense. Game probabilities weren't related to predicted margins, and vice versa. Plus, there's this aspect of modeling which explains the whole purpose of the exercise:

People have certain ideas about the sport and generally how things are supposed to work, but few can legitimately speak to the structure of the game outside the painted white lines. So this season, I strove to get back to the basics. In statistics we refer to this principle as parsimony, choosing the most parsimonious model over a more complicated one since it can be explained easier and/or with fewer attributes. Parsimony feels like a weird root word, since it sounds too much like persimmon and what the hell is this weird orange tomato devil fruit, but it is tried and true.

The new M&B methodology is based upon three factors: Log5, Log-Odds and Bayesian Estimation.

The Log5 method, most famously adapted to sports prediction by Bill James and Ken Pomeroy, provides a very nice framework for establishing the probability that Team A will beat Team B, given the relative strength of both teams. The most important properties about the Log5 method, which matter significantly for the following steps, are 1) the probability of victory between two equally strong teams is .5, and 2) the probability of victory between Team A and a perfectly average team is the strength of Team A.

The bedrock of statistical inference involving a binary response variable (i.e. 1 or 0, yes or no, win or lose) is logistic regression. Logistic regression involves transforming the response variable from one distribution, which can only take 2 possible values, to another distribution which is unbounded on both the lower (negative infinity) and upper boundaries (positive infinity) and related to the estimated probability of the original distribution. If that sounds confusing, don't worry: in real world situations, the range between the lower and upper bounds is -7 to +7, and we get a tidy probability estimate that an event occurs. Even better, that estimated probability can be expressed by the "logit" transformation as "log-odds," which is the exact same way one would think about odds in gambling terminology.

This relationship between probability and log-odds gives us a framework to express multiple factors, such as 1) expected margin of victory and 2) expected probability, given margin of victory. That helps connect the predicted outcome with the actual outcome in an easily reversible manner.

The Mothership's Overlord of the Numerical breaks down his play-based outlook for the upcoming season.

Stated alternatively, we can incrementally adjust our prior knowledge with each new bit of information. This has an awesome application to sports, since the axiom "you're only as good as your last game" actually means something in this context. You can take it a step further to see how this plays out for pre-season versus in-season predictions: a pre-season projection of team strength will get an adjustment based upon the relative strength of opponent and scoring margin after each game. The posterior probability is *fully vested* in the sense it accounts for every known bit of information at that point in time, regardless if it's Week 2 or Week 10. Moreover, using the same model for Weeks 2 and 10 reduces the number of assumptions we need to make, namely that there's a fundamental difference between the two weeks (there more than likely isn't).

Even better on the assumptions front, we only have to build *one* model: the pre-season estimation of team strength (more on this in a bit). It doesn't matter how off our initial projections are (or how wide the prediction interval), so long as they make sense: the "true" probability will converge with each additional bit of new information -- in this case, game outcomes.

Yeah, the preseason is a vacuum in which team strengths don't exist. But there are ways around this, since there's another stat out there that measures what a team will do against an average opponent: Simple Rating System(SRS). Folks familiar with M&B know that SRS has been an important input previously, and it remains so for one very good reason: divide SRS by 10, and you have log-odds. M-A-G-I-C.

The preseason model is built off an inference of the relationship between this year's SRS/odds and a number of common factors, such as last year's final SRS, returning starters, recruiting over a five year period, a new defensive coordinator, stadium capacity (as a proxy for football spending power), offensive players drafted and whether the team belonged to a Power 5 conference (plus Notre Dame). It checks off all those pesky linear model assumptions boxes (nerd term), so it's legit. Basically, controlling for other factors:

Keep in mind, those figures are all relative. A program doesn't have that much control over its stadium capacity, so we're really talking about differences between capacities of teams (and, as a proxy, spending power). Similarly, you can't go back and change last year's SRS: better teams from last year tend to do well the following season. Below is a Log5 prediction interval chart of where the Gopher opponents stack up with Minnesota included for reference. 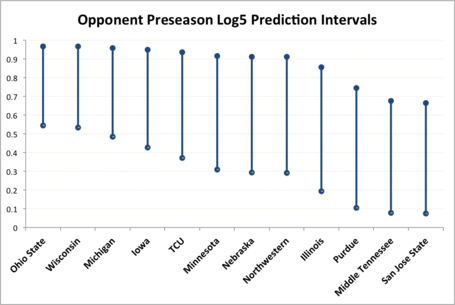 As you can see, those intervals are generally pretty wide. But that's OK! Remember that the new M&B methodology is less concerned with where you start (though we do need it as a baseline) as it will make weekly adjustments from the actual margin of games. If I were truly concerned about getting the entire season right based off available preseason data - which I am not - I wouldn't rest until I found a relationship that produces more narrow intervals. Since this is about incrementing our knowledge of teams 12+ times, we can use these prediction intervals to point and laugh at Purdue, while marveling at how Illinois stands out as a squad that could be randomly really good or abjectly terrible, like pits of Hell level torment. Intervals are narrower for the top teams, which is expected.

Also, let's just pause for a moment to see that the model scores Minnesota higher than Nebraska for the 2014 season, and has a higher floor. If the Husker Internets were more like Hogville, I'd be taking out extra arson insurance on my vehicle.

Whatever, you guys just came for the simulations, right? Right. Yes, I still do these. Again, based off predicted Log5 game probabilities against opponents, which will absolutely change over the course of the season. This is where a preseason model with tighter intervals would come in handy. 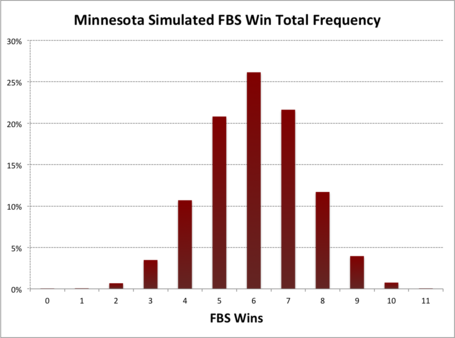 Game modeling? Why yes, let's do that too.

Games against FCS teams are stupid, the least of many reasons is a lack of available odds and o/u data. SBNation's official odds provider, OddsShark, lists the line at -26.5. Others in the TDG community have seen the line closer to -15, so I went with both. I'm sure we'll get a VegasInsider consensus closer to game day, though it really matters not. In Log5 context, a 26.5 vs. 15 point margin makes a huge difference in opponent strength. Assuming the Gophers' Log5 probability of .707, the Panthers' corresponding Log5 is either .145 or .350, depending on spread. Think about the latter interpretation for a second: EIU would beat a perfectly average FBS team roughly a third of the time.

Bottom line, your fear index is dependent on how strong of an opponent who believe EIU to be and/or latent Minnesota pessimism forged in 2006-2011. Remember, New Hampshire was a Top 25 FCS program running the spread that tickled the nerves of our fanbase back in 2012. We trucked them by 37. The Panthers lost a 2nd round quarterback and their head coach, plus their defensive coordinator was a graduate assistant last year. So it goes.

Allow me to indulge in a little NSFW tailgating amp music, since it's the eve of our nation's premier holiday.

Full disclosure: everyone in this band is wasted for this performance. But while most folks are like lead singer Phil Anselmo and become a sloppy mess with more booze, the sauce only seems to augment guitarist Dimebag Darrell's (RIP) considerable skills. He is a Pied Piper of drunkenness, a maestro of binge drinking machinations that will have you crushing aluminum to a thrashing but steady rhythm in Lot 37. Pantera is aggression, distilled and bottled, ready to be dispensed at the ready to get your blood flowing on cold October mornings.

I'm not exaggerating when I say I've listened to this song and many others of the same ilk on every single drive into TCF Bank Stadium on Gopher game days. It is a ritual of mine to prepare me for a sport that is hundreds of collective century's worth of similar amalgamations. I continue with it because I started it for whatever reason and have no compelling reason to stop, since it's what I've always done. If college football had an essence, it would be exactly that: enjoying what began many decades ago with no reason to stop partaking, and even violent bodily reflexes at attempts to re-shape it.

Many college football things are changing and will continue to, though none of those will impact that thread of commonality stringing from decades past. We'll still hate everything about Iowa and Wisconsin, and play for not only pride but a giant bronzed pig and a wooden axe. The I will still be dotted in Script Ohio. Howard's Rock will get a rub as players rush into Death Valley. LSU will continue to wear white for home games at the other Death Valley. Texas A&M will still be weird, with their odd cheers and huge ass but engineered-to-impress bonfires.

So, in salute of the upcoming season, I raise a toast to the beautiful, tear inducing, emotionally charged, flawed (but in a lovable way only those who grew up with it could understand and voraciously defend) sport. It's what we've always done, and it's what we will continue to do. Cheers, football, this Surly Furious is for you.

Hey, it's what I always drink in the lots. And so it begins again.