I work health information technology. So I'm always excited to see a new solution (software, hardware, whatever) being applied in a medical context, especially a sports training or sports medical context. It's even more exciting to see the Gophers end up on the leading edge of a technological wave:

A year ago, Gophers football players were so excited about being on the cutting edge of athletic performance tracking that they couldn't keep it to themselves.

Coach Jerry Kill didn't quite understand how the technology would help yet -- and wanted to hold off making a big deal.

But part of the University of Minnesota's success during an 8-5 season was due to their ability to measure the speed, exertion and fatigue of players in practices and games.

All of that data was stored on a GPS tracking monitor, weighing not much more than a few ounces, placed on the back of their shoulder pads.

The Gophers are utilizing a product from a company called Catapult Sports. But just what is the U using and what does it do?

"The system just helps the entire coaching staff get a better pulse on their team," Ben Peterson, a sports performance manager for Catapult Sports, said. "It reports the athlete's speed in practice and how fast they change direction, the amount of mechanical load that they're experiencing. The coaches take that information and make the decision to adjust the rates to the overall performance of the players."

At Minnesota, the data from the GPS trackers gets downloaded on laptops almost instantaneously, and Klein's staff collects the information to share with Kill by the time he gets to his office after practice.

The players' speed is tracked by miles per hour. You also can monitor which players are pushing themselves and the ones who are dragging -- and when that happens in practice and games.

"From my standpoint, it's raised our ability to train guys to the expectation that the game places on them," Klein said. "We go hard. But now when we want to back off, we can look at it and say 'You're going at this a little too hard. Let's scale back a little bit." 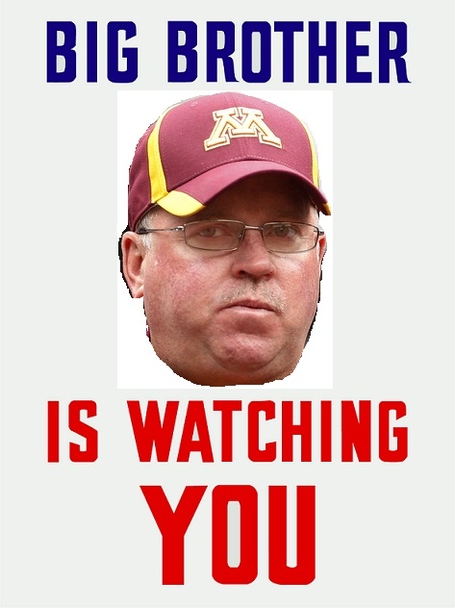 What I find most interesting is that they're using the technology during games as well. I wonder if the coaches are getting summaries of the information during halftime via the team's support staff, or if it's a tool that they review postgame?

We've established why the Klein, Kill, and the rest of the staff would like it. What do the players think of the coaches being able to track their every move on the field in both practices and games?

The most fun the players get out of the system is to see who is running the fastest.

"I get up there pretty good," starting quarterback Mitch Leidner said. "Every sprint day on Wednesdays, we come in the locker room and see the speeds that are posted up there. It's pretty cool to see."

The three fastest players on the team this summer were sophomore cornerback Jalen Myrick, redshirt freshman running back Berkley Edwards and senior safety Cedric Thompson, in that order.

Yea, that's how I'd have used it too. If you can't use advanced tracking technology to talk smack to your teammates, then what good is it? Incidentally, try running 22 mph sometime. It's not easy. The players recognize the other benefits of the system though.

Cobb, who was the first back to rush for 1,000 yards since 2006, said it helped the coaches keep him fresh and figure out how to keep him at peak performance.

"When your numbers start to drop, they know they have to back down a little," he said. "It just helps the coaches monitor where are legs are and how fresh we are."

Coach Kill definitely lives up to his image as an old school head coach in many ways. But he's certainly no Luddite when it comes to solutions that help him and his staff improve the performance of the team. And that's something that his team and all Gopher fans should be happy to see.