Minnesota Football Recruiting: Jeff Jones Admitted into the U

The highest rated prospect to sign with the Gophers in the Internet recruiting era has received his admission's packet to the University of Minnesota, per his Facebook page.

Share All sharing options for: Minnesota Football Recruiting: Jeff Jones Admitted into the U 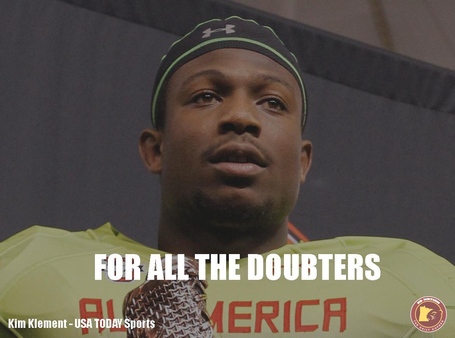 In the latest development regarding the on-going eligibility saga of star running back recruit Jeff Jones, the Under Armour All American, Minnesota Mr. Football winner and former Washburn standout posted a picture of his admissions packet and letter into the University of Minnesota onto Facebook this evening, a further signal that the four star prospect will not be headed to Iowa Western this fall.

Jones' post and admission into the U is not an indication of NCAA eligibility, as the Clearinghouse would still have to rule him eligible for the 2014 season. However, his admission is yet one more hurdle cleared, regardless if he redshirts this season.

We'll continue to monitor the situation and update as new information comes in, but in the mean time, this is a very positive development for Jeff and Coach Kill.

According to an updated from Star Tribune Gopher beat writer Joe Christensen, Minnesota is, in fact, still waiting to hear back from the NCAA regarding eligibility:

Jones took summer school, and the grades were still pending as of late July. In coming days, the Gophers expect the NCAA to either clear Jones to play, or at least grant him an initial eligibility waiver. The waiver would allow him to use his scholarship, but he wouldn't be able to play until 2015.

Emphasis mine, since the story on the surface is circulating around these two options.

Next Up In College Football Recruiting