It's time for the best gnome moderated weekly B1G round-up column on the interwebs EVER.

Illinois continues to live dangerously. The gnomes were ready to throw shade all over Tim Beckman until the Illini pulled things together for a late win. I'm seeing a trend, and it's not snark friendly. The gnomes are growing impatient. Perhaps a trip to the West Coast will help Illinois deliver a faceplant? Until then Illinois...touche.

Time to check in on the Wes Lunt Fanclub at The Champaign Room:

The Illini thought they had won, and given the situation, they most likely had, but they almost took us on another trip down the roller coaster. There was no interest in stopping them, no enthusiasm as they nudged the receivers out of bounds, and no concern for the outcome. It has to do with the discipline of the team, which should be entrenched in them by the coaches. It's been a worry of many during Beckman's tenure. Penalties and stupid mistakes have been part of Illini tradition for the past 2.16667 years. It needs to be clean up, no excuses.

It was a game that could have been won easily with just a few different turns, and alternatively, it could've just as easily been a loss. There was improvement from Week 1, but also new room for other improvements. Next week, the Illini venture out west to take on the Washington Huskies. A team like that won't be making the same Illini-saving mistakes that the Toppers did today. Beckman will need a nearly flawless performance if he hopes to remain undefeated, and so far, he hasn't gotten that. Not even once.

Next Up? Saturday at 3pm @ Washington on FOX.

Good work Indiana, you didn't contribute to the Big Ten's bad weekend. Let's see what The Crimson Quarry thinks about this weekend:

We'll be deep in hostile, Ohio territory when our team kicks off in Bowling Green for the first of two back-to-back road games. If IU is to secure their first bowl trip since 2007, they're going to need to have some success on the road. Coincidentally, that 2007 squad also had a Week 2 road date with a plucky MAC squad and after bursting out to a 34-7 lead by halftime, held on to win 37-27. This Bowling Green team is a lot better than that Western Michigan team was, but I think the 2014 iteration of the Indiana Hoosiers is better as well.

I'm guessing Indiana fans are dreaming of the day where going on the road to Bowling Green doesn't even elicit a single shred of concern.

Stop teasing the gnomes Iowa. It's very frustrating and not nice. You were putting together a perfectly serviceable meltdown game against the MAC and then you had to go out and be competent when it mattered.

NO IOWA BAD IOWA! YOU WILL PEE ON THE RUG SO THE GNOMES CAN LAUGH AT YOU. 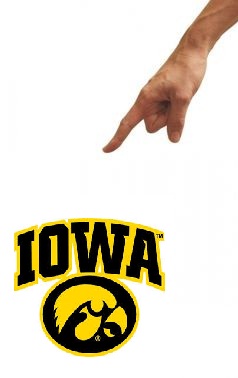 The little things. This is a well-worn refrain from Mr. Vint, but I can't think of a game in the last five years that laid it so plainly clear: Kirk Ferentz's conservative, field-position-heavy coaching on both sides of the ball turns Iowa football games into competitions of details—and Iowa has stopped performing those little things better than its opponents.

Next up? ANGRY IOWA FIGHT, as Iowa State goes to Kinnick. 2:30pm on ESPN.

//looks at the gnomes

I think the gnomes are still adjusting. Give them time. Maryland came close to given them the loss they so dearly crave, but in the end managed to pull an Illinois and win late. But boy was it ugly. How ugly? Let's go to Testudo Times. Here's a sample:

Unfortunately, the turnover bug struck again when Albert Reid coughed up the Terps' fourth lost fumble of the day and seventh fumble overall.

The Terps turned the ball over six times, including two Brandon Ross fumbles and two C.J. Brown picks, leaving its defense on the field for way too much of the game. 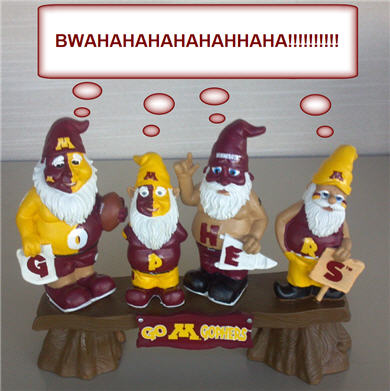 Proud of you Maryland. You've earned the gnomes snark respect.

Next up? West Virginia comes to town. 11am on BTN.

Last week: ALL OF THE NOTRE DAME CAUSED SADNESS, 31-0. 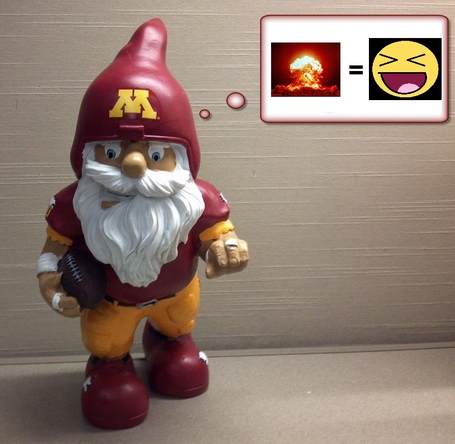 BRING ON THE ANGST AND GNASHING OF OF MICHIGAN TEETH!

Losers.
we have all become losers around here.

When went 7-5 and were content, not happy, but angry enough, because the five teams were good... we were losers.

Last year when we almost beat OSU, but we didn't and we accepted it. We were losers. Not brian thought, I give him that....

This team, these coaches and these players, don't hate losing... they, and we accept it and try to put the best, most positive face on it... I get it, becasue it is human nature...

but we have become losers...

that is what I think of our coaches. For the first time ever. fire hoke. I am done with him.

and I am done making excuses. we are at the nadir of our program...

Good to have you back bad Michigan. Maize n Brew?

If one man could single-handedly win a football game, Everett Golson did just that.

Notre Dame's senior quarterback could do no wrong throughout Saturday's game, seemingly allowing his offense to do whatever he wanted against a defensive back group who did not have Jabrill Peppers see game action and Raymon Taylor missing most of the game with an undisclosed injury. Golson led the Irish with 23 completions for 226-yards and 3 touchdowns in a 31-0 blow-out over rival Michigan. It was the first time since 1984 that Michigan (1-1) had been shutout.

#HokeHotseatRanking is now at LAVA.

Next up? Miami (OH) is the ritual MACrifice to atone for this mess. 2:30pm on BTN.

Last week: Fought the good fight against Oregon but lost 46-27. 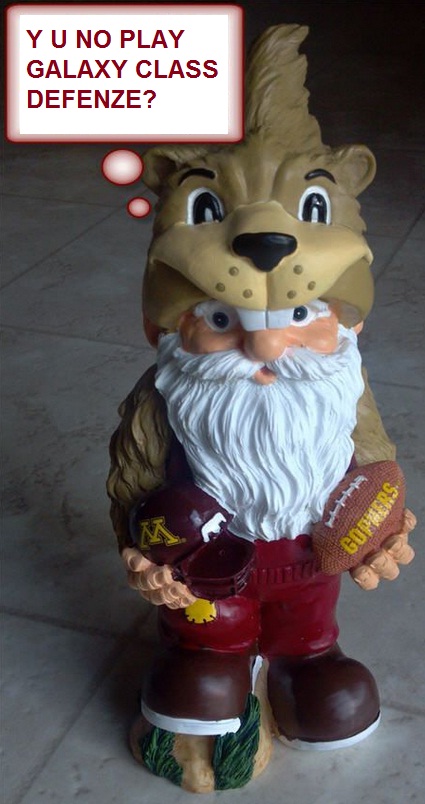 MSU wasn't terrible. But yea, if they're the juggernaut their fans claim this shouldn't have happened. The Only Colors?

Conventional wisdom would have led most people to believe that Michigan State's defense would give it a chance to win at Oregon.

While forcing Marcus Mariota and the Ducks' offense to five three-and-outs with the game still in the balance Saturday night, the defense didn't answer the bell for the most part in the seventh-ranked Spartans' 46-27 loss to No. 3 Oregon.

Probably still going to win the B1G though.

The gnomes train of thought?

Corn Nation can makes sense of this right?

Overall:  F We saw a few good things, but the bottom line is that Nebraska didn't play well at all.  It was a game Nebraska should have won handily...and they didn't.  The grade has to reflect that.

Close but no cigar Nebraska. The gnomes expect more from you.

Next up? A late west coast game at Fresno State. 9:30pm on CBS Sports Network 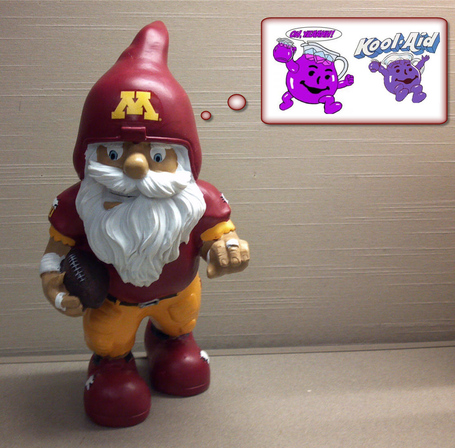 PURPLE KOOL-AID IS SO YUMMY! But this is what happens when you drink the purple kool-aid when the signs say otherwise.

The gnomes are sure your stagnent offense couldn't have used Venric Mark. Playmakers being so overrated and all. Inside NU, what do you think?

You can try to find reasons to be optimistic. You can tell yourself that this 0-2 start is an aberration or a minor setback or the product of bad luck. You can read quotes from players or point out seemingly fixable things like "character and poise" and believe that the Wildcats are going to turn their season around. Or you can look at how Northwestern has played since last year's Ohio State loss and conclude that the program is in a free fall.

The gnomes vote for free fall.

The gnomes see you Ohio State. They see you giving up sacks. They see you losing prime time games at home. And they want you to bring this back in November. 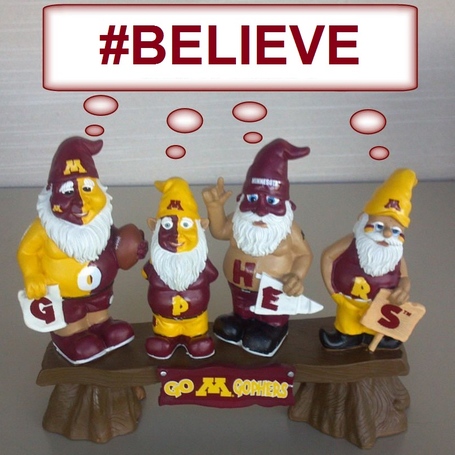 Virginia Tech was too much when it mattered and Urban Meyer lost in the regular season for the first time as Ohio State's head coach.

Forget the Akron game. Goody, you won. The gnomes would like to remind PSU students that celebrating the ending of NCAA sanctions in the streets is why a lot of people hate you right now. Right or wrong it's true so maybe you should think things through a bit, hmmmmmm?

Back to football with Black Shoe Diaries:

But never fear--a classic Penn State defense was there to bail them out. Last week, the defense showed flashes of brilliance in run stoppage but allowed UCF to make it a game late. This week, they played classic Bend But Don't Suck Penn State defense and, helped somewhat by a missed field goal to end the Zips' first possession, held an opponent to its fewest points since the last time the Lions faced a MAC opponents.

Next up? BIG TEN SEASON OPENER ON THE ROAD AT RUTGERS! FEEL THE EXCITEMENT AT 7PM ON BTN! 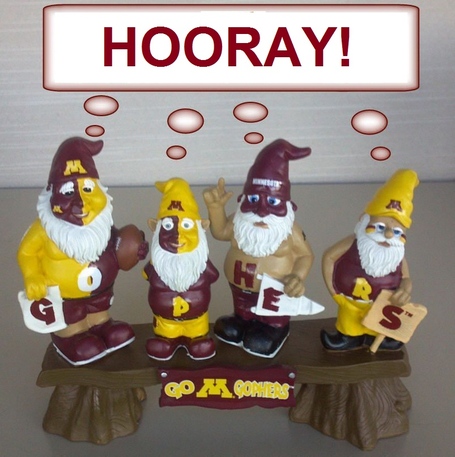 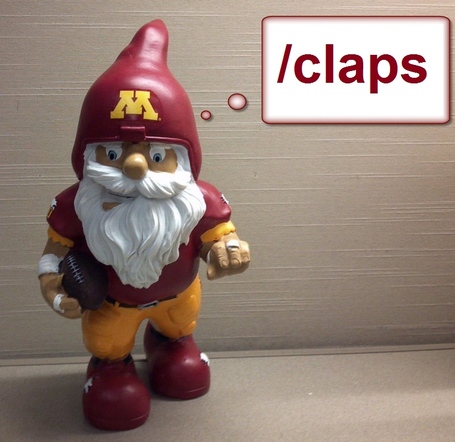 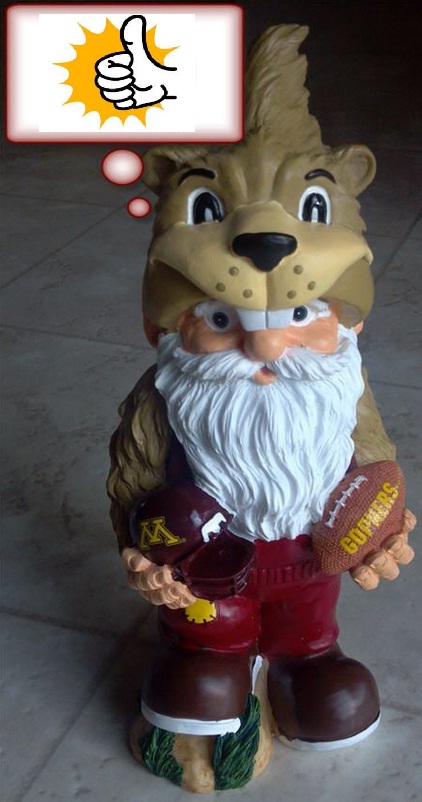 Nothing went right for Purdue today. Time and again, Central Michigan tried to hand the ballgame to Purdue. They were missing their top offensive player and the backup punter/kicker, who probably was prepared to do absolutely nothing today, kept shanking punt after punt (when we managed to force them to punt) to give Purdue good field position. There were other mistakes by the Chippewas too, but it did not matter. Purdue had more, and in more critical situations too. 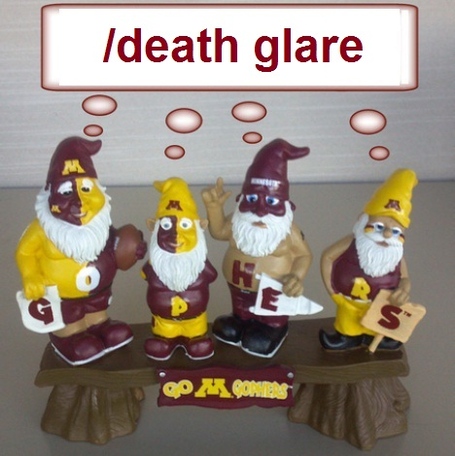 HEY! I wasn't even going to ask you. Cranky little [inaudible mumbling].

Perhaps Rutgers did get caught looking ahead.

With a 31-7 lead at half and all the momentum in their back pockets, Rutgers looked ready to cruise towards a serious blowout. With just one second half touchdown however, the Knights let Howard back into the game by allowing 18 points in the third and fourth quarters on 296 yards of offense.

Next up: Penn State, 7pm on BTN

The first half was gorgeous (for schadenfreude, not quality of play). The second half was less enjoyable. An Tanner McEvoy might be able to pass. Boo.

After a disastrous day for the Big Ten Conference -- Michigan State, Michigan, Ohio State losing to Power 5 conferences, Nebraska and Illinois barely hanging on against seemingly inferior competition, and Purdue and Northwestern just losing -- No. 18/19 Wisconsin did what it was supposed to: beat an FCS team in Western Illinois.

But not by the way everyone thought they would. The Leathernecks seemed to have 13 guys in the box to stuff the run, and the offensive line could not get the push off the line of scrimmage for the majority of the afternoon.