I was recently contacted by a publisher asking me if I'd be interested in checking out a book that might be of particular interest Gopher fans.  In the past I have had similar offers to review, such as this one which was really a fantastic book for Gopher fans.  This particular book is on the history of The Little Brown Jug and the Gopher-Wolverine rivalry.  So of course I find this worthwhile and wanted to pass this on to our readers with a TDG stamp of approval.

The two teams played in a highly anticipated 1903 game.  The game ended in a 6-6 tie but Michigan mistakenly left their water jug in the visitors locker room.  The two teams did not play again until 1909.

The morning before the 1909 game, a pep rally was planned for both teams.  Minnesota's All-American captain, John McGovern, was instructed by Doc Cooke (Minnesota's AD at the time), "You tell that Michigan captain they can have their jug back if they beat us tomorrow."  Michigan accepted the challenge and defeated the Gophers 15-6.  They returned to Ann Arbor victorious, with the jug, thus beginning college football's first football trophy game."

This book is a quick read if you so desire but the real value is the page after page of pictures.  A great gift for your favorite Gopher fan or to treat yourself.

I do have a copy to give away but I will wait until the Michigan game week to bring this up again and we will figure out a way to get it to one lucky TDG fan.

Can be found on Amazon for around $22

I was able to get a few pics from the book to share.  The first is of Minnesota's equipment manager who originally found The Jug, Oscar Munson, painting the score of a Gopher win. 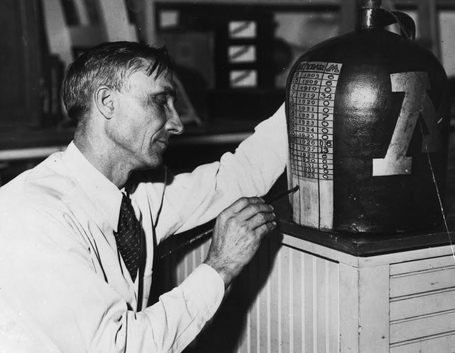 This is what The Little Brown Jug originally looked like.  You can see the very first 6-6 score painted on the right hand side.  And then on the left is the 1919 Gopher victory painted as well. 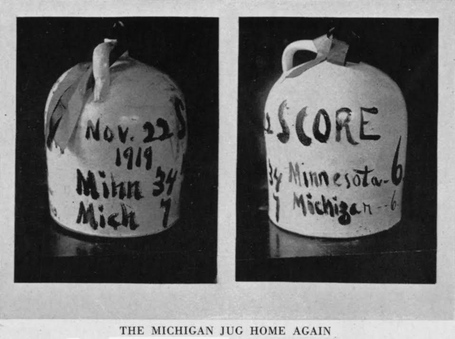 There were rumors of The Jug being stolen and today's Jug not actually being the original.  But this picture shows both the replica and the original after it was supposedly found behind the bushes a couple years later. 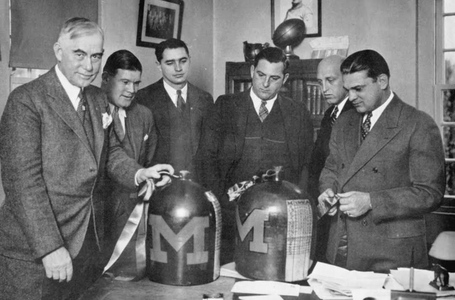 Photos used with permission from Arcadia Pulbshing
The Little Brown Jug, The Michigan-Minnesota Rivalry, by Ken Magee and Jon M. Stevens. Available from the publisher online at www.arcadiapublishing.com or by calling 888-313-2665.