Mitch is your starter!

Other changes from previous weeks:

KJ Maye and Drew Wolitarsky are listed as OR as the starters at the Z-receiver position.

On defense with the loss of Nick Rallis, Everett Williams is listed as the 2nd team linebacker behind Damien Wilson.  In fact all three backup linebackers are freshmen in De'Niro Laster and Jonathan Celestin the others.

For a second week in a row Micheal Amaefula is listed as backing up Hank Ekpe at defensive end.  Gaelin Elmore is now the 2nd string behind Therien Cockran at the other defense end spot.

Briean Boddy-Calhoun and Craig James are listed as OR at the cornerback spot behind Derrick Wells.

On the injury report, the only Gopher player who has not been ruled out for the entire season who is injured is Alex Keith who will miss his second straight game after getting injured in the opener against Eastern Illinois.

The full depth chart is below: 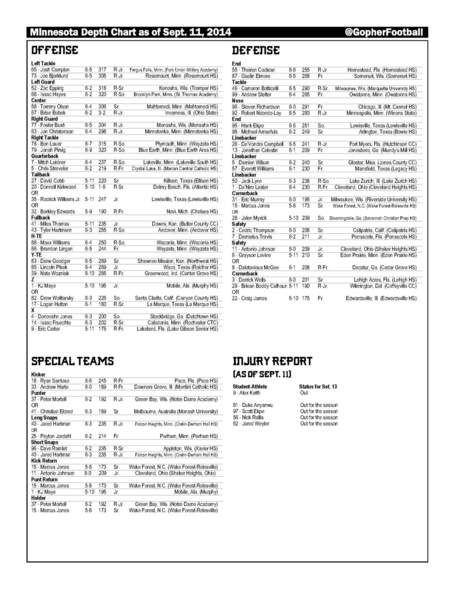 Minnesota at TCU: Week 3 In Fort Worth