Charts and Chalk gets more philosophical this week as we sort through the rubble of last Saturday.

Full disclosure: I haven't watched this game yet. Saturday was the wife's birthday and, well, I don't have that kind of equity built up to skip any of those while I drink beer, watch football and curse everything. Hearing and reading about this game, I'm not sure I want to. I mean, the agony of suffering through something live has an expiration of just after the final whistle, and probably sometime after that if the results are particularly horrible. The anticipation of dread, knowing what you're going to watch will make you ill, is almost worse; kind of like a snuff film.

So this may be the worst ever rendition of Charts & Chalk, since it really features no charting and certainly no X's and O's talk. Instead, we go more global with our assessments. 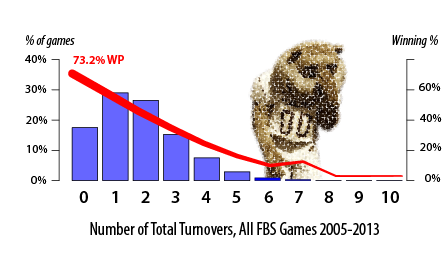 There's only one number you need to remember from the game: 5. Five turnovers is no way to go through life son but let's put a little more context behind that. Of all games involving FBS teams from 2005-2013, only 4.2% of said teams finished the game with at least five turnovers. Teams with exactly five turnovers won only 14.3% of their games. Contrast that with games involving no turnovers by a team (17.5%): those squads won at a clip of 73.2%. When coaches talk about winning the turnover battle, what they really mean is not turning the ball over at all.

Beyond the obvious, there are additional bits to decipher. Namely, the occurrence of 5+ turnover games is toward the tail of the distribution of games with a slope that exhibits an exponential decay after 1 turnover and a similarly shaped winning percentage curve. In other words, there will be some reversion to the mean here as the Gophers' turnover woes were more than 2.7x greater than the weighted average of turnovers per game (1.8). That's a lot, and it's very unlikely to occur again.

Your turnover infested corpse of a game: we've just had ours.

Stop me if you've heard this before. A Gopher offense commanded by Matt Limegrover turns the keys over to an injured quarterback who probably shouldn't be playing, someone with little starting experience to justify rubbing some dirt on it and a young man struggling with confidence. Then, instead of protecting him by leaning on your running game, you being Limegrover run more 3/4 WR sets against an extremely tough defense and expect him to pass his way to victory.

This was a game that happened last year. It was bad, and now we're all reminded of it again.

The only difference between this game and Limey's blunder against the Hawkeyes is that I'm not even mad. Namely, we didn't lose to Iowa last Saturday, and 5 turnovers is hilariously not indicative of future performance. I'm legitimately questioning whether Kill treated this game as a barometer of how much they need to improve before the Big Ten schedule more than as an opportunity for a statement victory. That would make sense if you one-eye it, since people in this town really only care about how the Gophers do in conference. We're not far along enough on the program arc where people get up about Minnesota proving themselves against real non-con opponents.

If that - in any way - played a factor in Jer's decision, then I can see why he started Mitch Leidner, stuck with him and why the offensive strategy ran counter to what you'd expect; namely the strength of the offense. I don't agree with it, in fact I think it's a repugnant approach and part of a broader set of issues surrounding the Big Ten. Occum's Razor and the offense didn't play well, turned the ball over at a relatively infrequent clip and put the defense in a no-win situation for all 3 of TCU's touchdown drives? You excoriate this game from the memory banks and fire it from a cannon.

Mitch's development from beyond just a Moose but to a Moose throwing a football is a product of decision to *not always* go with what has been pounded into his skull as the safe throw but to actually see the field and go with the guy who's open. That interplay between the natural gunslinger tendencies he displayed in high school and the bowl game versus the buttoned down Kill style QB who doesn't make mistakes is by far the most interesting storyline of Mitch's journey as a quarterback, with the early results most clearly on the side of trying to think like the coaches.

He's still trying to think like the coaches because that double tap in the pocket is the worst poker tell ever.

Something happened to Moose this offseason where he started worrying about being perfect on every throw in every situation, a stark contrast to the dude who ran over San Jose State, led a confident first half in the Big House and was a Wolitarsky catch through the wickets from leading a comeback in the Tejas Bowl. He's too damn worried about being the man and trying to prove it every snap that it's throwing off whatever sense of moxie and grit that attracted the coaches in the first place.

And there's also this:

"I think sometimes he's still trying too hard," Limegrover said. "When you get to the point where he's our guy, I think he wants to prove that that was the right decision each and every play. And what we're trying to convince him is, throwing it out of bounds every once in a while, throwing it at someone's feet, 2nd-and-10, or punting the football isn't the worst thing in the world. Trying to do too much and putting our defense in a bind because you get a pick at midfield or something, that's what we can't do."

Limegrover added: "Coach Kill's really changed. He's usually real hard on quarterbacks, and he understands that's what Mitch's mindset is. So he'll get on him whenever he's pressing too much, but letting him make a few mistakes and learning as he goes there."

3 games in and about as honest an assessment you'll find about what's ailing Mitch right now, except this was written during the first week of camp. That's bad, and I don't know what will get his head straightened out other than exactly.the.same.thing the coaches tried last year: get Chris Streveler more involved each week, let Moose "compete" for the job again and hopefully have him regain that fire.

Kill's quarterback recruiting strategy for the decade-plus he's coached at the D1 level has consisted of finding guys who were tough, smart and athletic, figuring they'd coach 'em up and have the signal callers play a conservative style that meshes well with a strong running game, defense and special teams. Accuracy and passing talent be damned, for that is secondary to not making mistakes.

There's value in such a strategy at the FCS and MAC level, where the disparity between quarterbacking talent (and by proxy, offensive output) varies widely between teams. Consistency wins you games.

In the Big Ten? Tough, smart, athletic quarterbacks are four star recruits, and by the way, they'll need to complete throws in shoeboxes under pressure. Scarcity is in play too, so you'd better have an offensive philosophy defined before you set the targets on a specific type of quarterback.

One area of concern I have is how far to either side of the option-game balancing scales they coaches see the offense moving towards, and how that impacts the type of quarterbacks they recruit. If running the quarterback will remain a significant part of the attack, then certainly the type of athletes they've signed to date are fine but let's not delude ourselves into thinking the look of the O should be anything other than the prototypes developed by Rich Rodriguez or, more appropriately, Kansas State. However, if the zone read and variants thereto are merely constraint plays and we do intend to spread the field more with 3/4 wide, then things like accuracy and arm strength are a little more important.

Trouble is, I don't know which direction the coaches are headed given the last 17 games. When push comes to shove, the staff appears to double down on Power O, 21/22 and even 31 personnel and designs everything around facing a loaded box. They'll grind things out against Big Ten squads, but seem all too eager to completely go against the grain during the non-con portion. Part of it could be experimentation, though it could also be simply too many plays and a contrasting mix of players needed to run out of those formations.

We're getting pretty damn close to jNWU levels of injury smiting, to the point where I wonder if the precipice of a miserable trudging through the season to get healthy for 2015 is upon us. I think back to the early Mason era and the different phases of the program trajectory: a two year build from the den of suck into a breakout year three, a three year period of a perfectly acceptable holding pattern save a year of injury/attrition, and then another major step forward when everything just aligned the way Mase intended.

I think we've hit that holding pattern, and may be experiencing the injury/attrition year as well.

Kill's program won't take the next step until the offense finally catches up with the improvements on D and special teams. In order to accomplish that, the tall mauler type of offensive linemen they want have to develop and mature, wideouts need to consistently get open, a few running backs who can make things happen on their own are needed (like Jeff Jones) and the quarterback absolutely needs the confidence to make throws on time and the maturity/experience to understand situations. We're partially there on the OL and RB front, though the WRs and QBs have a long way to go.

Until then, I'd expect the staff to turn nearly every Big Ten game over the next 3 seasons into mired drudgery through the muck of 4 yards per carry and field position.