Film and scheme review of the Gophers' 24-7 victory over San Jose State. Yay for not passing!

On the most imperfect weather day in TCF Bank Stadium history, we saw nearly the most perfectly imperfect passing performance in ages. Yay for alliteration! 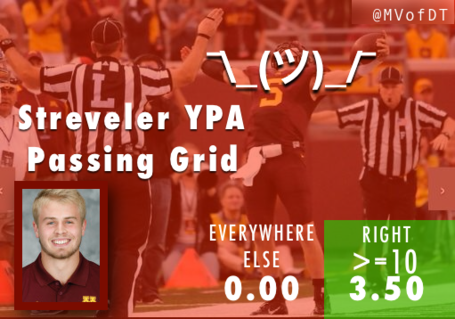 I mean, you didn't think the Gophers would only attempt 7 and complete 1 pass without C&C reviewing each throw with a fine tooth comb, did you?

Pass #1 - No idea what route Donovahn Jones is running. He gets bumped in press coverage with hands to the face (penalty?), then proceedes to: swim inside, maybe realize he should be running a fly and cut outside, only to move inside again (while being held). Chris Streveler throws the go-fade, which logic may dictate is what Jones should have run all along. Well placed ball from Strevy... had Jones run the fly. Miscommunication is awesome.

VERDICT: This INC is on Jones/refs.

Pass #2 - Quick 5 yard out to Drew Wolitarsky. Strevy kind of loops it out there all lazy and the CB makes a nice break for a diving PBU.

VERDICT: This INC is on Streveler.

Pass #3: Four Verts! We run four verts! The CB is caught peaking in on Drew Goodger up the seam, allowing K.J. Maye to get behind him. Streveler throws a beautiful, perfectly timed pass that Maye basically drops. The CB made a decent recovery but this was a TD Maye should have caught.

VERDICT: On Maye for letting it hit him in the hands, though the CB made a good play. Incidently, Goodger was running free up the seam.

Pass #4: 10 yard hitch from Woli, who is 1) Held across the back by the CB 2) has the CB go through his body (while holding on to his right shoulder) to break up the pass. How this isn't DPI is beyond me.

VERDICT: On the refs.

Pass #5: MY EYES DECEIVE AND IT'S FOUR VERTS AGAIN! SJSU sends the slot DB on a blitz and releases Maye upfield. Strevy sees it but double pumps in the pocket, allowing the robber safety to break up the pass.

Pass #6: Shallow cross to Woli with floods from the fullback and tight end. Good play design and call, though the deep safety reads it immediately, sits on Woli's hip and leaps the route for a pick.

VERDICT: On Strevy for not getting more air under it and leading his receiver to the corner.

Pass #7: 5 yard out that Strevy gets some mustard on and Woli knew to run a little deeper.

SUCCESS!!1! Woli takes a shot as the throw is a little behind him (could have been a touch earlier too) but all things considered, a completion. Bronx cheers from the remaining crowd.

In total, I'd give Blues Streveler (h/t @TREtanic) a C+/B-: the actual letter grade depends upon my mood and how little caffeine I've had. Regarding his accuracy, I yield to Derek Burns first:

Re:#gophers passing there are generally 2 areas a QB struggles: 1. Pre/post snap reads & progressions (identify who to throw to)

2. Accuracy (correctly identified who to throw to but need to hit right spots). Leidner has struggled with both at different times.

Streveler, in my opinion, did well with the second bit as his passes were generally in the right spots (taking into account some margin for error due to first start et al) but shares one of Leidner's problems with reads/progressions. More than a few of his passes were late, which allowed the DB to make a break on the ball on what otherwise would be a catch.

Oh irony of ironies, getting the ball out quickly and making the correct read was something Philip Nelson was really good at. We won't go down that road because it's futile, but I'd be remiss to not call that out.

If it wasn't abundantly clear by now that Kill's game plan is to minimize quarterbacking risk every single game, those seeking our coaching staff to unleash an offensive strategy designed to work on our biggest weaknesses may have reached their nadir with contest.

I'm reminded of comments from Jerry after the NDSU game in 2011 (why God? Why) on his decision to rotate between MarQueis Gray and Max Shortell on nearly every other snap. Basically, we were trying to win a football game was the moral of the story, though it reeked of desperation to find something - anything - that would ignite the offense. Four years later and nothing has changed about the game day mantra: win the game, even if it means getting a little crazy/desperate.

Now, there was no desperation with how the game played out against SJSU (and similarly in 2013 when faced with the same scenario and opponent) but there may have been some in preparation. Strevy's throws were all ridiculously safe, required him to make one read and were designed not to be intercepted. When Kill takes the blame for the INT in the red zone, you can interpret it as the coach's perception of failure to mitigate turnover risk in that situation rather than any fault on his quarterback. It's also how they (the coaches) are able to shoulder responsibility for terrible strategies against Iowa and TCU; it's easier to fall on the sword and fault a game plan versus throwing your quarterback under the bus.

Taking everything we know about this staff, they appear content to devise the safest possible tactics to defeat a given opponent with slight variation allowed for in-game risk tasking, when appropriate. They seem to understand they don't play well from behind, which is why nearly every game devolves into defense and field position. In the scenario where they happen to possess a lead in the second half, the strategy becomes one of grinding and/or boring the other team to death.

Basically, we are every Iowa team under Kirk Ferentz. Play it as close to the vest possible and come away with a win late. Alternatively, let the other team beat themselves and take advantage of opportunities.

This was a game that happened last year. It was bad, and now we're all reminded of it again.

One area of concern I have is how far to either side of the option-game balancing scales they coaches see the offense moving towards, and how that impacts the type of quarterbacks they recruit. If running the quarterback will remain a significant part of the attack, then certainly the type of athletes they've signed to date are fine but let's not delude ourselves into thinking the look of the O should be anything other than the prototypes developed by Rich Rodriguez or, more appropriately, Kansas State. However, if the zone read and variants thereto are merely constraint plays and we do intend to spread the field more with 3/4 wide, then things like accuracy and arm strength are a little more important.

Strevy's reads were lauded by the coaches and really jived with David Cobb's ability to see the cutback lanes on inside zone blocks. Streveler did a really great job of holding the ball right until the read defender commits and was nearly flawless against SJSU. This worked against the Spartans because 1) GERG and 2) GERGGERGGERG. Seriously, GERG has probably never heard of a scrape exchange and that's why both Streveler and Cobb were able to pop for over 6 yards per carry (on 52(!) attempts). Rest assured defensive coordinators not responsible for multiple forest fires will make the necessary adjustment, at which point Limegrover should probably counter with an arc block.

The other half of this option dynamic is Cobb, who continues to be the best cutback runner at Minnesota since Marion Barber III. It's this vision that sets Cobb apart from the other backs on the Gopher roster: much like Glen Mason and Oregon, Cobb appears to look for the cutback on every play but will make the appropriate read given the blocking upfront. When you combine this with Streveler's quickness and proficiency on the option, it was an even more explosive output on the ground than last year's SJSU romp.

9/8/2012: this is the last time Minnesota held an opponent to 7 points or less, under 4 yards per play and less then 300 total yards and 100 rushing yards. Back in 2012, it was FCS New Hampshire, so the results from last Saturday are just a little bit more impressive.

4.87 yards per play through the non-conference is the best since the 2012 season, though what's even more impressive is how they got to this point. In 2012, the defense allowed 6 TDs under close conditions. Under the same conditions in 2014, the defense has allowed 4 TDs. With halftime scores of 14-0, 28-0 and 17-7, the defense has done the job in games not terribly afflicted with turnover and short fields.

In fact, nearly every defensive category through 4 games is on par with the 2012 season which was the first indication we collectively had that Claeys was a completely different (read: good) kind of coordinator than we're used to. Indeed, even by advanced Football Outsider measures (FEI and S&P+), Minnesota has been outstanding on defense this year. This is Claeys' most complete defense at Minnesota yet, buoyed by talent and consistency at all three levels. The depth, speed and talent in the secondary allows for a multitude of exotic coverages, making things difficult for passing offenses both on a YAC and a completion (~55%) perspective. Damien Wilson continues to prove he's the best Gopher linebacker in years, while Jack Lynn impresses with his consistency.