Drink from the Jug. Taste that? That's the taste of sweet victory! If you and I feel this way, imagine what the players, coaches, and alumni are feeling! To top it off, it was on national TV! Gophers win convincingly over the Michigan Wolverines, 30-14 to bring the Little Brown Jug home!

Share All sharing options for: 3S-4Q-5T: The Jug Comes Home!

Several TDG writers and myself predicted a win over the Wolverines in our preseason picks; don't we look like geniuses! To be honest (and what is a blog for if not a place to be honest), I didn't feel that way this week; in fact I predicted a Gopher loss. With Mitch, Maxx, and Marcus out, plus only one completion from Chris last week, what would our chances be against the #8 (or I also heard #9) run defense in the nation? TCU shut down our run after all and that game wasn't pretty. Then yesterday I read Matt's Models and Bottles piece and heard rumors (Kill) that Leidner and Maxx might play; so I expected a closer loss, maybe a tough fight to win at the last second if all the breaks went our way. What I got today instead was glorious, and eating my crow never tasted so good. Its time for 3 Stars, 4 Quarters, 5 Thoughts! 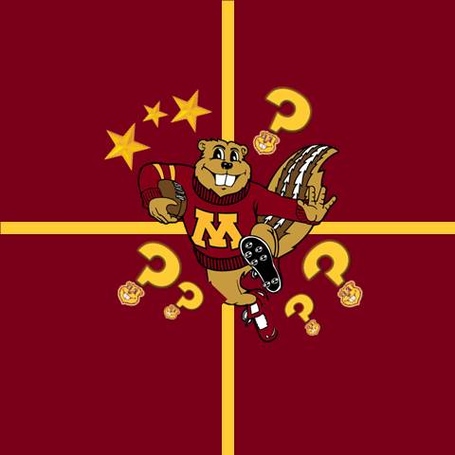 Only three stars? Yeah right, heck nine stars are too few. Today I will give 3 stars each to the offense, defense, and special teams. 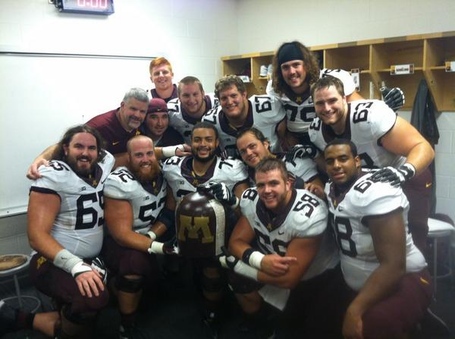 OK, his stats for passing may not justify a star on other teams, but it does for this team. To come back from two injuries (well, actually playing while still hurt) after missing a game and having a good portion of the fan base calling for the Gophers to play a freshman with one start instead of him, while in the Big House against a team that has absolutely owned us, he was a star. Not all of his passes were good, but enough were. He didn't fumble, he didn't throw an interception, he made good calls, and he moved when he had too including a run for a touchdown.  STAR! Remember folks, he's still just a sophomore. The main negative in my eyes were a couple of sacks he took when he should have gotten rid of the ball faster. I'll take it. Let me say it again, STAR!

David "corn off the" Cobb laughs at your highly ranked run defense. By the end of the first quarter he had more rushing yards than Utah or Notre Dame had all game. By the end of the half, he had more yards than both teams had combined. The commentators were drooling with positive comments about him today. The amount of yards he gets after contact are amazing. Too bad he didn't get a touchdown, but he's a team player so I'm sure he doesn't really care. All hail Cobb! STAR!

The majority of the game you controlled the line of scrimmage. Your effort allowed for the first two stars to play their game. This was your best effort of the year, the type of play we have been looking for all year. At the start of the year you said you wanted to be not just the best offensive lines in the Big Ten, but one of the best in the nation. Keep this up and maybe you will be. SO MANY STARS! 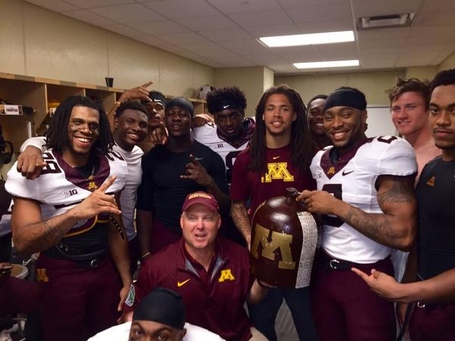 I have criticized you in the first four games for missing tackles but all is forgiven. You interception for a touchdown sealed the deal and just let the remaining air out of the big house. You also tied for fourth on the team with 4 tackles (1 solo). Way to go, STAR!

You had the only sack of the game and it was a big one (11 yards) plus you had 2 more tackles, including another for a loss. It may have been only three tackles, but your presence and leadership was felt. STAR!

You were second on the team for tackles with 6 behind only #5 Damien Wilson (LB - SR) who had 7. Your efforts and those of your fellow DBs (and really the whole defense) locked down the defense. Sure, Michigan made some completions but you made sure they weren't game changers. STAR! 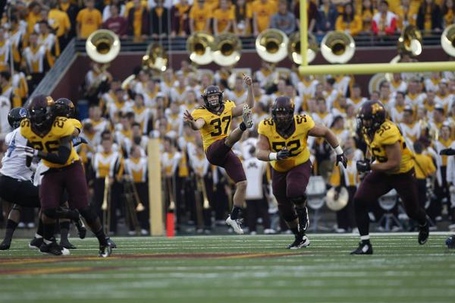 Welcome to the Big House Mr. Big Man with the Big Leg. The commentators acknowledged your leg but questioned your accuracy (with some justification). Your answer? Kickoffs, good. Extra points, good. Field goals, GOOD! STAR!

MOAR Mortell, we at TDG have a major man crush on you, some would say we love you; it might not be healthy. You pushed the Wolverines back, way back, over and over again. Great ball placement. STAR!

Sure you muffed a punt but you recovered it. You had some nice returns that put the Gophers in great field positions. Most importantly, you didn't mess up. It's great to have yet another solid punt returner as a Gopher. Oh yeah, you're a true Freshman. STAR! 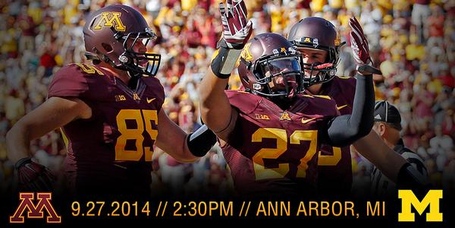 Gophers didn't score but they didn't give up a score either. Missed opportunities but also reason for hope, Cobb is looking pretty good.

2nd Quarter - The Empire Strikes Back / Return of the Jedi

Crap, Michigan scored. Wait, what's that, the Gophers answer with a touchdown? Gophers drive down in 7 plays on the strength of Mitch's passing capped off by a Leidner run for a touchdown? Awesome, we are right back in this game. Stop Michigan and then drive down the field with seconds left to score a field goal before half. We're in the lead! Strike that we are going to win this game (Gophers are perfect under Kill when leading or tied at halftime, perfect the other way when loosing at halftime)! 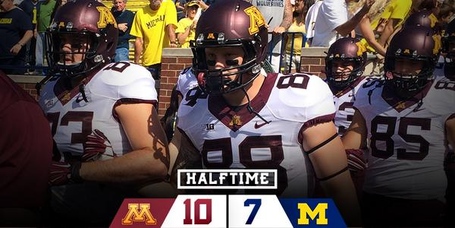 What the hell is Hoke thinking? Why hasn't he put Gardner in? Thank goodness for that! Gopher's offense scores 10 and the defense adds 7. Michigan shut out with negative 2 yards of offense. This may be my favorite quarter of football ever! So many stunned sad faces on TV.

We're going to party like its 2005! I was a little nervous when Gardner marched down the field and scored, but the Gophers adjusted and put the game away! Go Gophers! SKI-U-MAH! 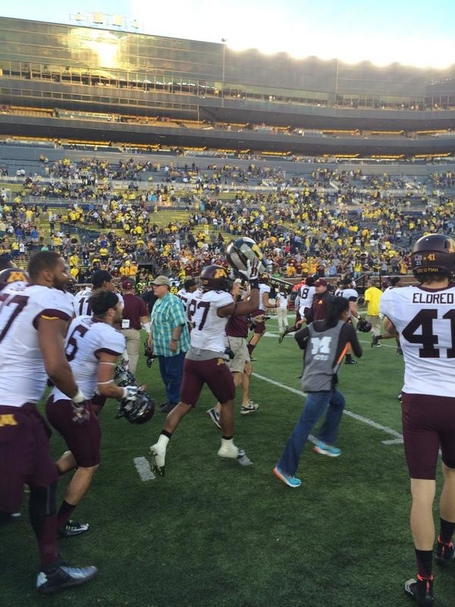 Did not expect that.

Again too many stupid penalties but some of those may have been bad calls.

HFS AWESOME!!! How am I supposed to sleep tonight? FYI its 12:40 am as I write this. Good night folks! 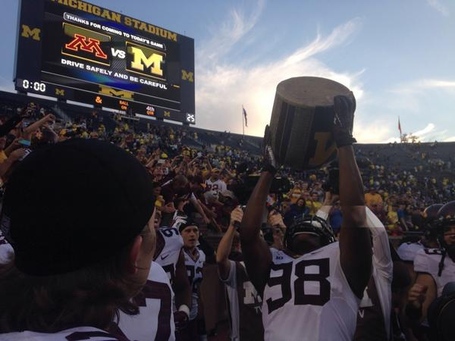 Minnesota at Michigan: Gophers Win The Jug Back!