Film review of the Gophers' first game of the season and some data dives!

Berkley Edwards and "The Dick Punch." That's how I'll catalog the events of this game into my memory banks, an otherwise nondescript manifestation of the pay-for-easy-home-wins mantra embodied by those residing in ivory towers. Chicken little inhabitants of message boards making bold declarations of how we won't get away with this against real teams are correct, though they're somehow ignoring the requisite weirdness that accompanies Week One. There was much underneath the surface here, most of which arose before the ticker read 42-7 and we started ignoring what happened to third stringers. 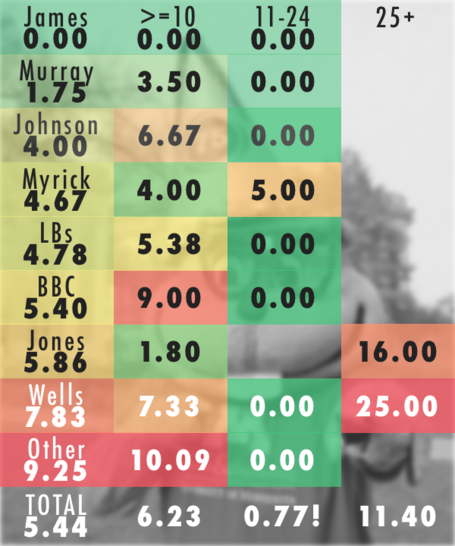 Full disclosure: while I did chart this game, it was a quick chart as I was watching the game live. No formations, personnel groupings, blitz designations, etc. Also, stuff is unofficial but that goes without saying.

There wasn't much from charting perspective I found interesting in the game, other than the glaringly obvious badassery of the secondary.  The infographic you see breaks down the yards per attempt allowed for each defender (minimum of two defensive targets) at the overall, short (>= 10 yards), mid range (11-24 yards) and deep (25+) levels. I tried to limit defensive targets to obvious coverage responsibilities, bucketing everything else like zone coverage or screens under "Other." Finally, linebackers got lumped together as a group.

First and most obvious: these guys are good. Against a team with pretty legit receiving talent, Sawvel's crew allowed an absurd 0.77 YPA on mid range passes. That's right, one completion out of thirteen attempts. Another major takeaway? The complete lack of deep passes against this secondary. EIU attempted only three long throws all game and only after the score was 35-0. Indeed, the Panthers were content to use their dink and dunk strategy most of the game and that played right into the strength of the Gopher defense.

Other notables: Eric Murray lived up to his shutdown CB preseason hype and Craig James, with 2 PBUs in his collegiate debut, lead the team in fewest YPA allowed. That boundary CB spot is in great hands for the next 4 years. At field corner, you'd expect to see more yards per attempt allowed on underneath throws since that spot is more prone to playing off-coverage or quarters. Indeed, Briean Boddy-Calhoun and Derrick Wells allowed the most YPA on short passes of any defensive back. That conceded short yardage is assuaged by both field CBs allowing nothing in the intermediate; Wells' lone deep pass allowed came when he was playing nickel safety. A trend to match moving forward is how well Jalen Myrick plays relative to BBC and Wells.

Non-DB stuff to point out. I don't like that I have to point it out again, but it bares repeating:

Claeys certainly focuses on the latter: ending opponent drives without letting them cross the goal line and preferably not letting them kick field goals either. One of the reasons that per play based rating systems (such as Bill Connelly's S&P+ or PredictionMachine.com) rate Minnesota lower defensively than drive based systems (like Brian Fremeau's FEI) is precisely because the per play metrics are inflated by conceding (to a degree) the shorter passes while the Gophers work on preventing bigger plays. Combined with field-flipping special teams, Claeys' insistence on making opponents earn their points by executing consistently on longer drives from deeper starting positions contributes to said opponents sputtering out before they can actually score. Minnesota has ranked in the top 25% of FBS teams in lowest percentage of defensive drives ending in scores each of the last two years, no doubt a key part of the turnaround of that unit.

Keep all of that in mind as you recall EIU and how each of their first 11 drives ended without points.

Related to the yardage disparity: who cares? Prior to the last three Panther drives when the score was 35-0, EIU was averaging 3.33 yards per rush, 3.86 yards per passing dropback (includes sack yardage) and just 3.62 yards per play overall. When the opponent gains almost 41% of their total yardage (166 yards to be exact) against second and third stringers, total yard differential means nothing.

No fancy cut-ups this week: just general scheme related items from things I saw during and re-watching the game.

No, Moose did not play great. He was committing too early, didn't appear to run through progressions and had route miscommunication issues with receivers. There was the obvious underthrown post to Donovahn Jones, a result of Mitch Leidner not getting himself into throwing position quick enough on play action and, subsequently, keying on the safety too long before committing to the throw (Edwards was also 1-on-1 with a LB in the flat with nothing but grass ahead of him). There were others, such as a botched 10 vs. 15 yard flag with Isaac Fruechte and a complete overthrow on a signature play to Maxx Williams that stood out as well. You know what Mitch seemed to do OK with? Throwing on the run and moving the launch point. The coaches also called a designed play for Moose only once and that appears quite deliberate. They *know* what he brings to the table there, and the season most assuredly rest on his ability to 1) stay healthy and 2) do more passing QB things.

No offense to Janeane Garofalo or Tony Romo reading this right now, but our coaches treated this as an exhibition game. Sorry if this upsets your delicate world balance predicated on playing competitive games against the FBS. No, Limegrover and Zebrowski went to the ole bag of plays approach trying to establish certain aspects of the passing game that will prove useful against real opponents. I'm talking about WR screens to Berkley, simple route trees, quick hitches/outs for third down conversions, etc. Generally speaking, I'd say the coaches gave Mitch a few options on passing downs and let him decide where he was going with it. He chose the "safer" route most of the time, which I'm positive is a Pavlovian response to his QB conditioning. Indeed, Limegrover lauded Mitch's decision making in the weekly press conference which lends itself to that interpretation. Against EIU, those safer throws were well covered (swamped, basically) while the vertical routes presented better opportunities. Mitch's development from beyond just a Moose but to a Moose throwing a football is a product of decision to *not always* go with what has been pounded into his skull as the safe throw but to actually see the field and go with the guy who's open. That interplay between the natural gunslinger tendencies he displayed in high school and the bowl game versus the buttoned down Kill style QB who doesn't make mistakes is by far the most interesting storyline of Mitch's journey as a quarterback, with the early results most clearly on the side of trying to think like the coaches.

Kill excused Mitch's performance by pointing scoreboard and declaring he'd seen more blitzes than he'd see in his life. Public confidence booster, it seems, since EIU burst out of the gates with an aggressive if not wantonly undisciplined 3-4 base. Most if not all of the TFLs in the run game were a product of our TEs (most notably Maxx, but Lincoln Plsek as well) not recognizing where defenders were coming from and from which gaps, clouding their blocking responsibilities. I'd pass this off for Week One wackiness except our primary rivals plays a Base 3-4 and with way better athletes, I may add (though they're experience a similar hurt along the defensive front). Ten game weeks in-between is a long time to get things corrected, though there's enough to be fixed that I'd be remiss to mention it.

Limegrover countered EIU's 3-4 defense in the second half by going to more 3 and 4 WR sets with a TE lined up as an inside receiver. When the Gophers went 10 personnel, EIU sort of seemed clueless as to what to do. They couldn't really run blitz from the angles they were used to, since that left things wide open for Streveler on zone reads. When Mitch was still in the game, they went 4 wide near the goal-line and the Panthers really did have no idea where to bring pressure. Result: Berkley TD on a simple inside zone handoff. The 4 WR set we trotted out gives defenses an interesting dilemma as a running team, since the side with the TE in the slot is undoubtedly the "strong" side yet that leaves the weak side open to the QB read option. My general sense is that sort of strategy will work against aggressive 3-4 fronts but won't succeed against disciplined 3-4's like Wisconsin, though I give them credit for at least thinking about this early in the season.

I can't tell how much of the perceived issues with run blocking resulted from EIU's 3-4 and our inability to properly block against free rushers (most notably in the Golden-I) versus any real weakness in our offensive line. Yes, this was a weird configuration of the line with Josh Campion and Jonah Pirsig on the bookends, though that generally wasn't the issue. Tight end blocking left a lot to be desired, as I've already mentioned. Yet when push literally came to shove, the OL produced when it came inside zone blocks against an undersized FCS front. The Power play was hit or miss, and a few draws were called without much success. In reality, upfront blocking was very unsophisticated and certainly didn't feature anything exotic like arc blocks or pin and pull, since we simply don't do that shit anymore (apparently).

The biggest thing I noticed from rewatching the game was how often Claeys went with a 3-2 front in dime on passing downs, especially after injuries to Scott Ekpe, Yoshoub Timms and Alex Keith. In this personnel grouping, Andrew Stelter shifted from a 3-tech DT to an edge rushing 3-4 DE and Steven Richardson lined up at the nose. DeVondre Campbell and Damien Wilson remained in the game, though most often used as pass rushing LBs. Here's what I like about that particular package. First, as charted above, EIU just couldn't complete anything beyond 10 yards against this secondary. Claeys has an embarrassment of riches at defensive back and can legitimately go 8-9 deep, allowing both press man against 4/5 WR sets with safety help over the top. That's ridiculous, but it's our ridiculousness so I approve. Second, Campbell and Wilson in the grouping keeps two of our better defenders on the field with the flexibility to blitz them from anywhere, or use them as spies. Indeed, from that set, Wilson/Campbell blitzed the A & B gaps, from the 9's and the B and 9's.