The defensive line took a bit of a beating last week. Not surprisingly, freshmen are moving up the chart for Saturday's game.

Yes, we're in the unenviable positions of having a true freshman starting on the defensive line.  Mr. Richardson, may your four-year career see many quarterbacks sacked and running backs dragged-down in the A or B gap.

There aren't any real surprises in the rest of the defense: De'Vondre Campbell and Damien Wilson lead the linebackers.  Redshirt sophomore Lack Lynn is listed as the third starting linebacker.  Your starting cornerbacks are Eric Murray an Derrick Wells.  Antonio Johnson and Cedric Thompson are the two men charged with stopping the offense if the first two lines of defense fail (and of course covering post routes and deep balls in the cover two).

The stable of running backs looks so: David Cobb starts, with second chair responsibility falling to Donnell Kirkwood OR Rodrick Williams Jr. OR Berkley Edwards.  Man, I just never get tired of looking at that lineup.

Your H-back (TE) is he who hast mastered the hurdling of defensive backs who attempt to make no-armed, closed-eyed tackles Mr. Maxx [Power] Williams.  On the other side of the line (let's face it, many times on the same side of the line) is Y-back Drew Goodger.  Brandon Lingen, Lincoln Plsek, and Nate Wosniak are also in the mix.

The wideouts are KJ Maye and/or Drew Wolitarsky, and Donovahn Jones. Others you're likely to notice are Isaac Fruechte and Logan Hutton.

There's been a bit of speculation regarding Berkley Edwards and whether we'll see him returning kicks in the not too distant future.  Well, according to this document, don't expect to see him on special teams this week.  Marcus Jones has a stranglehold on kicks and punts, with KJ Maye and Antonio Johnson the listed backups.

The only injury to report is #9 Alex Keith, whom you might remember for his touchdown-saving strip-tackle-recovery move against EIU.

Here's the PDF depth chart, just in case you want to try to become a play-by-play guy some day.  Ski-U-Mah! 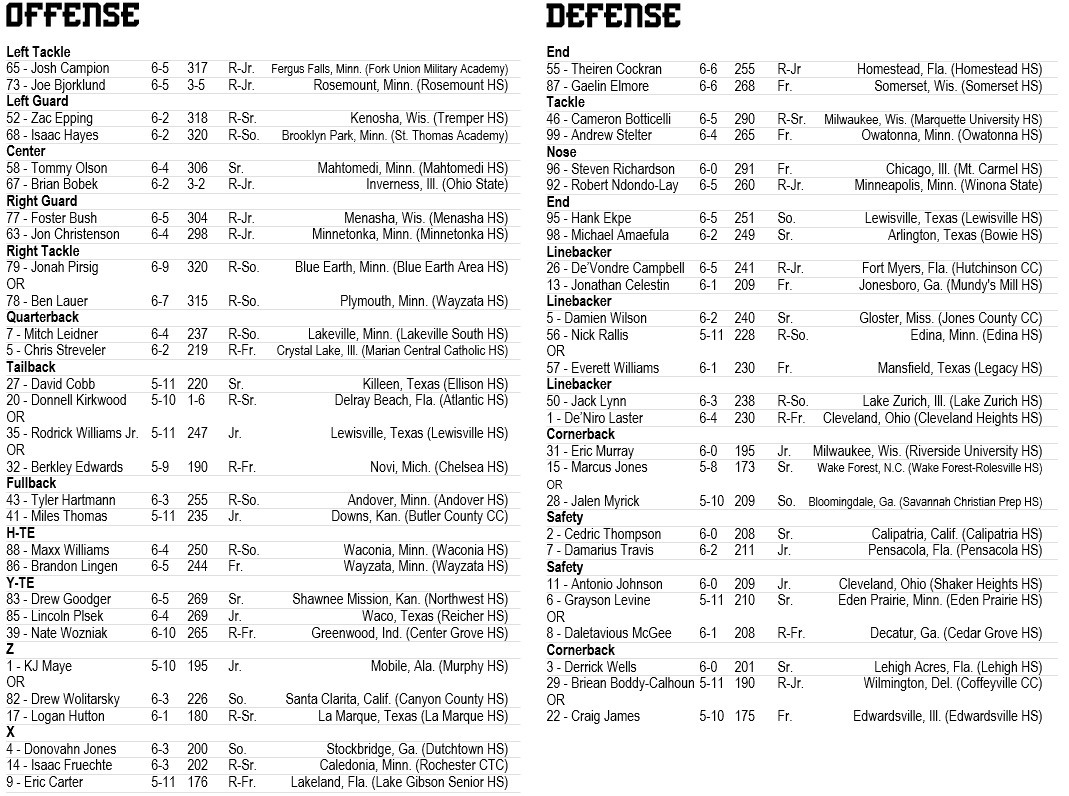 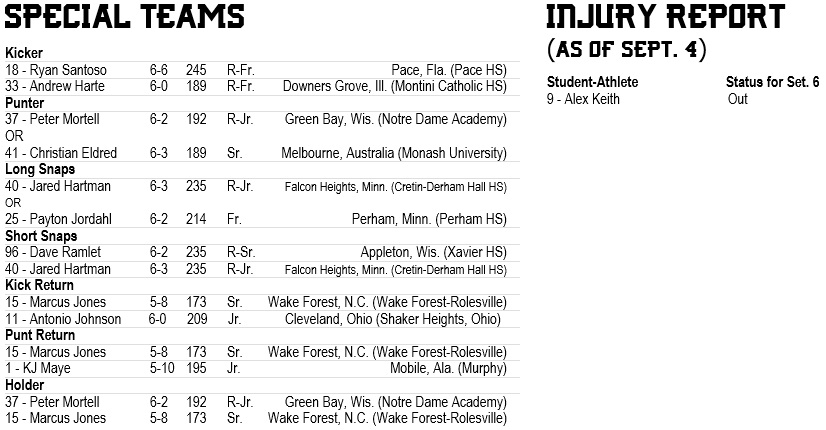