You want a calm, rational article backed up by stats? Too bad, because its time for 3 Stars / 4 Quarters / 5 Thoughts! Today I cover game 2, were the Gophers won their second in a row against Middle Tennessee (in two different ways). 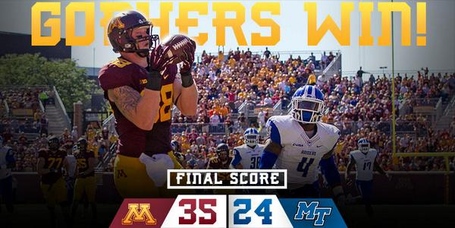 Well, that was a tale of two halves. I guess we are lucky, it was like we got to see two different footballs games. Of course in the end, Gophers win, so I'm happy! Remember, this is an article in which I write about my immediate thoughts following the game, which this week I watched in person at TCF. Unlike last week I did something special, I took notes! This doesn't mean my thoughts will be more accurate, just that what I write down will be more accurate to what I thought at the time. Here are my 3s4q5t! 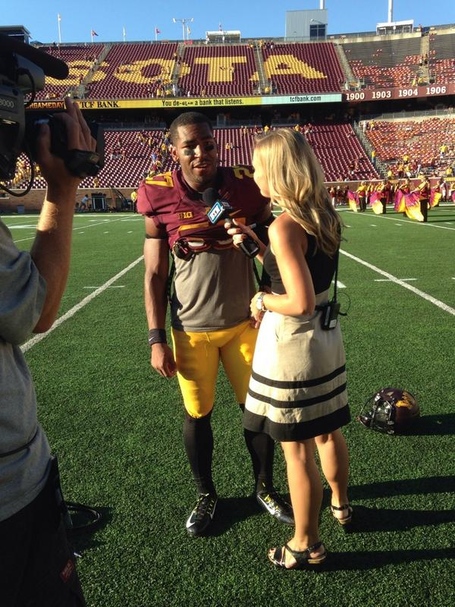 Corn off the Cobb. This guy is the man. If he only had greater top speed he would be an elite back. During the game I wasn’t aware of how many yards he had, only I knew it had to be way over 100. I see quite a few more stars in his future and won’t be at all surprise if he gets to play at the next level as a good journeyman type running back. Had some good blocks too as well as recovered the onside kick at the end of the game.

Steam Engine Wilson. Look to be the best and most consistent player on defense on Saturday. If I recall correctly he had a big sack in the 4th plus that big interception at the start of the 2nd which lead to the #88 Maxx Williams (TE, RS SO) touchdown.

MOAR Mortell. Yes, he had a blocked punt and perhaps he had a bad hold on the opening field goal attempt (I have not idea if he did or not) but his punts were beautiful! Unlike the first game, the punts were well balanced between distance, height, and hang time. In the first game, he out kicked his coverage, that wasn’t the case in this game.

#57 Everett Williams (LB – FR) was the latest true freshman to burn his red shirt. #96 Steven Richardson (DT – FR) continued to impress by putting pressure on the QB and really pushing the offensive lineman around.

#7 Mitch Leidner (QB – RS SO) way under threw his first pass which otherwise would have likely been a touchdown, but did at least get a defensive pass interference call.  The first drive ended with a missed field goal by #18 Ryan Santoso (K – RS FR) which sounded bad as soon as he kicked it, wonder what happened? Santoso’s kickoff after the following drive didn’t deliver but it also seemed from the stands that the refs screwed up by calling the play dead, did the MTSU player’s knee go down in the end zone before he tried to return it? Questions about MTSU – why did they go pass-only, I thought they where a running team (see later in the game). Where was the MTSU QB throwing the ball, #28 Jalen Myrick (DB – SO) was the only person near the ball, and we all thank him for that! MTSU had a good punter.

Perhaps the most enjoyable quarter of Gopher football I’ve seen in a long time. 28-0 at halftime? Yup, I’ll take that! Interception, Maxx touchdown (beautiful perfect pass from Mitch), extremely high and long kickoff’s, full stadium, to summarize, pretty much a perfect quarter. If I want to find some negatives, #26 De’Vondre Campbell (LB – RS JR) and our DB’s missed some tackles on running plays due to not wrapping up and there was the interception (I wonder if the WR ran the wrong route). The Gophers dominated starting field position, the line of scrimmage (both sides) and MTSU have up 70 yards on penalties in the half compared to the Gopher’s zero.

I wondered how soon we would see #5 Chris Streveler (QB – RS FR) come into the game.

The Gophers got their first penalty for 5 in the backfield on a punt, but it wouldn’t be the last penalty. A defensive pass interference call gave MTSU another chance but the Gophers had a great goal line stand to limit them to a field goal. There was a great interception that was somewhat dampened to what seemed to be a questionable sportsman like conduct flag and a quick series that ended with a Gopher punt being partially blocked. On that blocked punt an official go knocked over which seemed to please some fans (they thought it was the same ref who called the unsportmanlike conduct penalty, not sure if it was). Mitch had a nice scramble on a play where the Umpire got knocked over, those refs need to watch out! MTSU played a great quarter and just ran all over us, again, why did they pass so much in the first half?

Hey folks, don’t leave, the game’s not over yet! #96 Richarson has a nice tackle for a loss. MTSU discovers that their WRs can push off as much as they like and not draw a flag. No hustle with the first team defensive players, but the backups seem to move better. I didn’t know it during the game, but Mitch gets hurt and #5 Streveler comes in (that I did know, I just didn’t know about the injury). In the end, we win, Yes!

1 – Run/Pass: I actually liked the run/pass balance in the first half but not in the second.

2 – Accuracy: Mitch can pass great, when he is passing to Maxx Williams, then it seems to be every pass is great. He needs to get this instinctive feel with the other receivers.

4 – Such Great Heights: Santoso's kickoffs are really, really high. They look more like punts in terms of height, except when they are bad. So far he has had one bad kickoff per game, the rest are golden.

5 – The Bank: With an announced crowd of 47,000 or so, TCF was pretty full and pretty loud, until it wasn't. All of the Vike seats were full, so that was nice. Unfortunately, starting at half, and especially in the 4th, the stadium started to get empty. This was true of both the students and the general public. Listen, I understand it was a beautiful day, but please stay and enjoy it in the stadium!