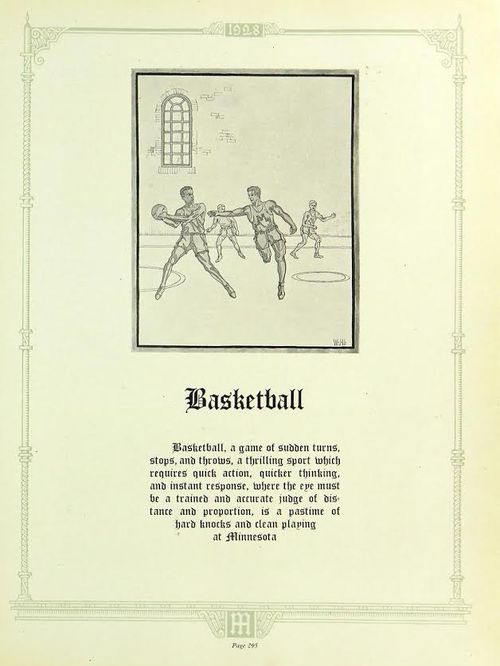 I thought the above drawing from the U of M yearbook was very pretty, and the line, "a pastime of hard knocks (not) clean playing" being particularly apropos now in 2015. BUT ANYWAY...

If you missed the first installment of my Barn History Series check that 'ish out right here.

Today I got a real fun newspaper article from January 13, 1928 in the Minnesota Daily about the tunnels underneath The Barn (then known as The Fieldhouse).

So this might be basic but I have never been in these tunnels, and was only kind of aware they existed. One is 108 feet underground? That seems quite far.

The sand taken from the tunnels was sold to be used for play grounds? CUTE!

Since you stuck with me through this fairly dull post about tunnels I will reward you with this photo from the first game at the barn.

I haven't identified the two players, but the bro in the suit is Dr. James Naismith, basketballs inventor and special guest for the opening game. Also, I have no idea why the Gophers player let the Ohio St. player smack him like that.