Before the bronze statue, there was the real life Floyd, before the real pig there was this wooden pig sign. Today it sits on display in an Edina sunporch. This is the little known story about oldest, shortest lived and only pig trophy to never change hands in the Iowa - Minnesota rivalry.

The sign would have been stolen sometime at night, during the week leading up to the Iowa game in 1935. The week was already filled with so much hype that few would have noticed the missing butcher shop sign. Iowa's anger over the 1934 Gopher - Hawkeyes game (48-12) had carried through to build up to the 1935 tilt. Governors from both states weighed into the pre-game trash talking.

If you haven't heard this part of the story before I'll quickly fill you in. Iowa Governor, Clyde Herring, still upset with how Hawkeyes RB Ozzie Simmons had been knocked out in the 1934 game said "If the officials stand for any rough tactics like Minnesota used last year, I'm sure the crowd won't." Herring seems to have been encouraging a riot. Minnesota's Governor Floyd B. Olson tried to calm things down by suggesting a bet. Floyd sent a telegram to Clyde, "Minnesota fans are excited over your statement about Iowa crowds lynching the Minnesota football team. I have assured them you are law abiding gentlemen and are only trying to get our goat ... I will bet you a Minnesota prized hog against an Iowa prized hog that Minnesota wins."

Floyd B Olson, left (WITH VICTORY CIGAR) getting his prize hog from Governor Herring, Via MNHS.

Obviously what comes out of that story is Floyd of Rosedale. Named for Floyd B. Olson, the pig came from Rosedale Farms near Fort Dodge, Iowa. Before the bronze statue, there was the real life Floyd, before the real pig there was this wooden pig sign. 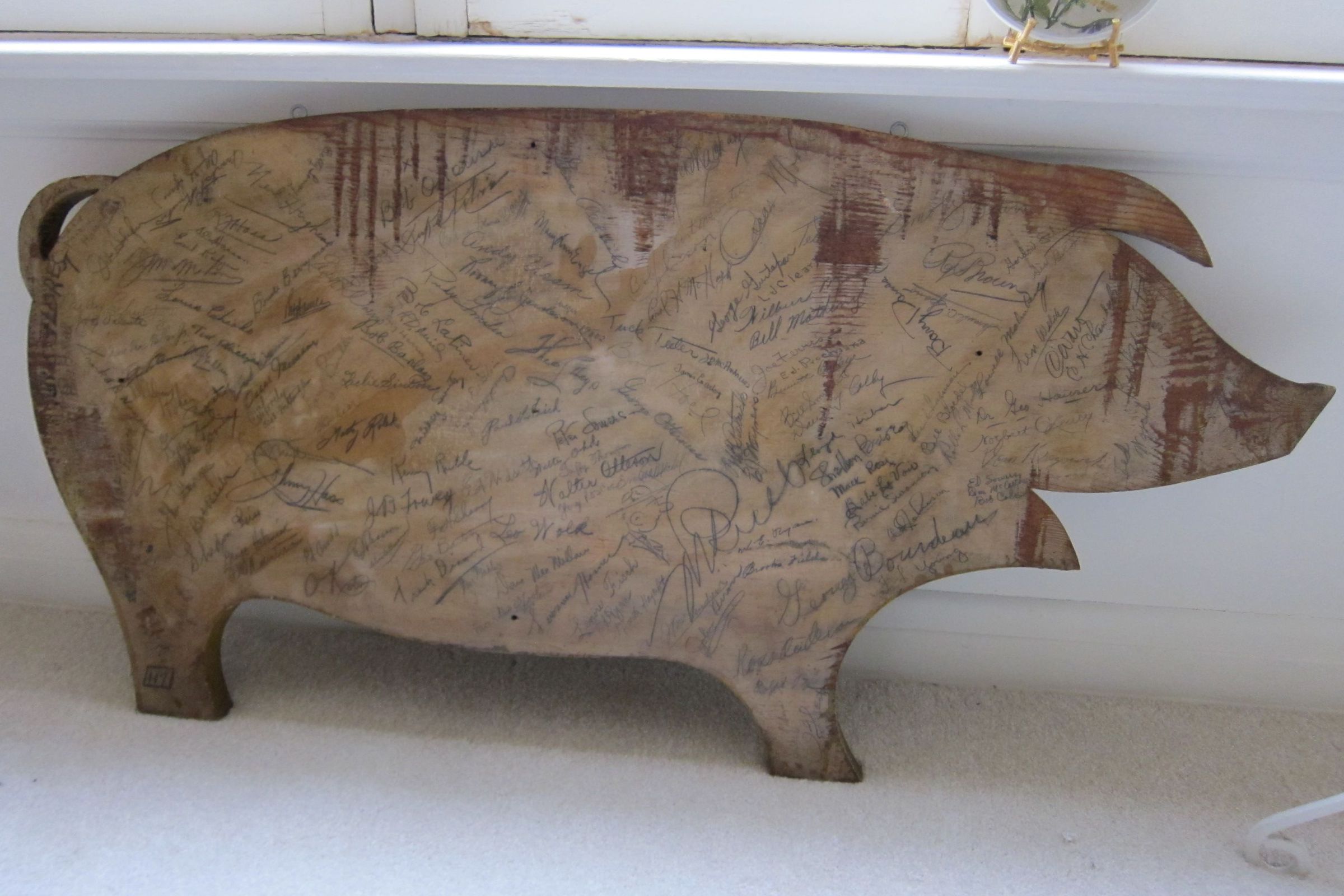 To the Minnesota players before the 1935 game it wasn't clear at all who would have to pay up on this bet between Governors Floyd and Clyde. In some tellings of this story the players worried that they would be on the hook for providing a pig to Iowa should they lose. Other versions of the story state that Minnesota players would present the wooden pig sign as a gesture of good will to the Iowa fans. Either way on a dark night in early November 1935 a butcher shop sign in Dinkytown went missing and got onto the train with the Minnesota boys heading to Iowa City.

The sign today is painted on one side but you can just make out "MEAT" underneath the coats of gold paint. The other side has signatures from about 70 people. "MEAT" is just visible. There is something else underneath MEATS but it is illegible.

After the Gophers beat Iowa, 13-6 in the closest game on their way towards winning a second straight national championship, the wooden pig came back to Dinkytown. For years it was hung in Cooke Hall. Visitors continued to add their names to the pig. At some point when the old wooden sign was headed to the garbage, it was saved by a University of Minnesota employee, Bob Patrin, who still owns it today.

Bob was kind enough to let me see the wooden pig and other treasures acquired from his career working for the U of M. While I haven't been able to corroborate any of the versions of the story he told me, it seems like a plausible tale. The sign might be from Harvard Meat Market, located at 804 Washington Ave SE, the only butcher/meat market/pig shop I could locate as being around the University in the 1930s. At any rate what is cool about this wooden sign is it is the oldest, shortest lived, and only trophy to never change hands from Minnesota in the Iowa - Minnesota rivalry.