A famous picture of Babe Ruth practicing with the Gopher football team is supposed to have been taken the same day that the Wolverines came to Dinkytown to battle for the Little Brown Jug and a Big Ten Championship.

Share All sharing options for: #TBT DID BABE RUTH ATTEND A LITTLE BROWN JUG GAME IN 1926

It's one of my favorite photos. The Sultan of Swat, The King of Crash, The Colossus of Clout, The COLOSSUS OF CLOUT, and here he is playing center for your Minnesota Golden Gophers.

While Minnesota didn't have a pro baseball team at the time, Ruth played exhibition games here as a Yankee (against the Saints or Millers) and also barnstormed around the state during the off season to make some extra coin.

The Babe playing in an exhibition game against the Millers at Nicollet Park in Minneapolis, 1924 via MNHS

Until recently I didn't even know the year the photo was from so getting additional info was difficult. But thanks to a helpful tip that claims the photo was taken on November 20, 1926 I was able to start there. I quickly realized that November 20, 1926 was a Saturday and the Gophers actually played a game against Michigan that day. Also in the tip is that the Babe Ruth photo appears in that days evening Minneapolis Journal newspaper. I've looked through multiple editions and papers from that date (and a few days on either side) and I can't find a record of this picture being published anywhere. 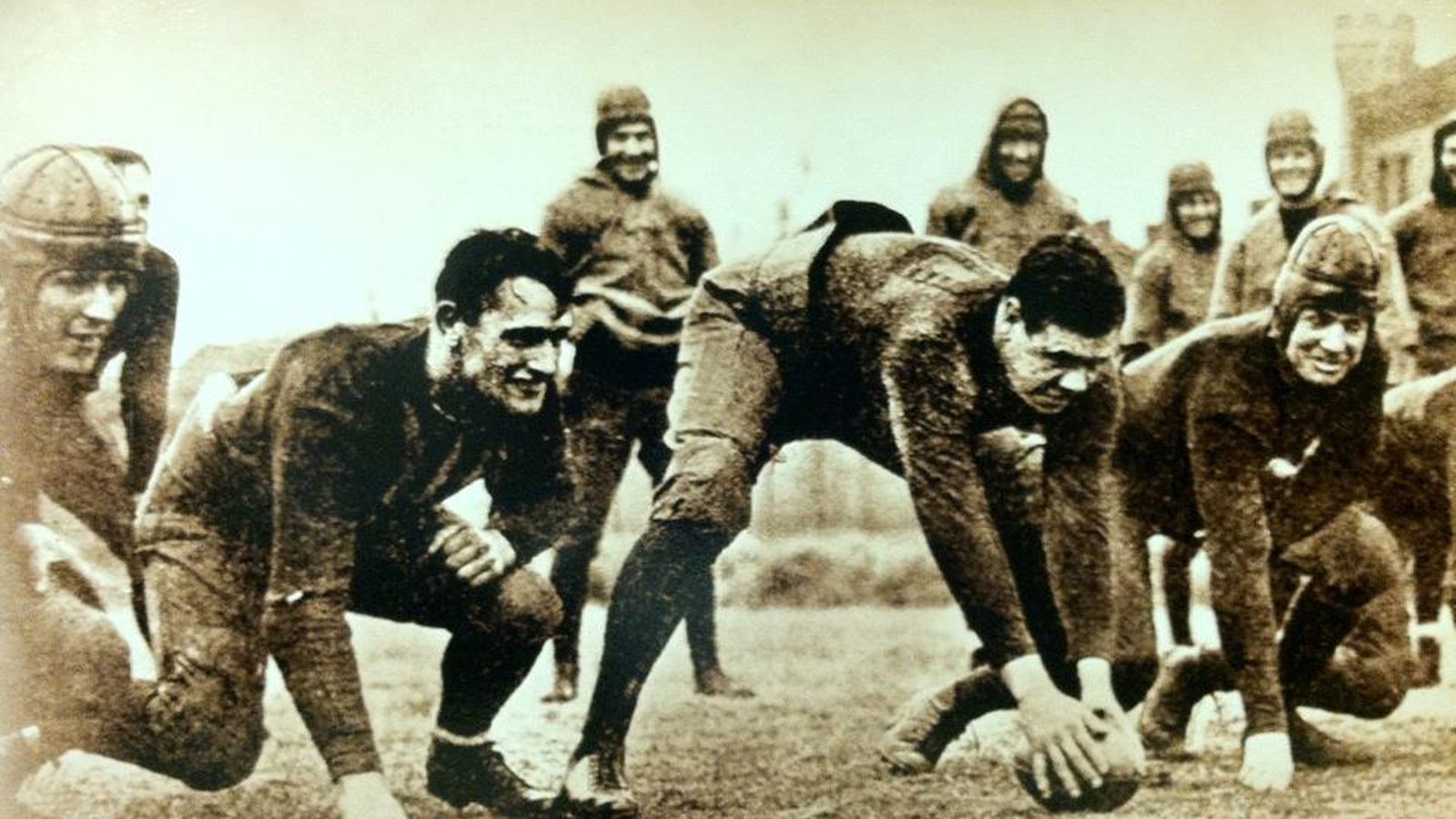 However I have been able to identify the players in the photo (from left to right); George Gibson, Harold Hanson, The Babe, Neil Hyde, and Kenneth Haycraft. And Ruth was substituting at center for George E. MacKinnon, who despite going on to be a U.S. Circuit Court Judge recounted this practice with Babe as one of his favorite memories. That collection of players only played together for 1 year, 1926, so the photo must be from sometime that season.

It doesn't make a lot of sense to me that Babe Ruth came to a game day practice, and it wasn't reported in any of the 4 Minneapolis papers, so it seems likely that the great Bambino crashed a Gopher practice some other time that year.

Sadly even if the Babe attended the Jug game he did not bring the Gophers luck as they lost 6-7 in the season finale. Fielding Yost declared that the two best teams Michigan played all year were the Minnesota eleven on October 16th in Ann Arbor, and the Minnesota eleven in the Memorial Stadium on November 20th" Its true 1926 was an odd year, Minnesota played (and lost to) Michigan twice (why twice? it's kinda interesting and well covered here), and Babe Ruth visiting the team.

So stay tuned, this photo fascinates me, and I'm gonna get the whole story.